There are but two languages that people of every nation can understand.  They are music ad pictures.  In playing a William Tell overture, the music depicts a storm and everyone knows that it is a storm, or the music tells of dawn and every one feels that it is dawn.

I have seen hundreds of good pictures spoiled by good music. The picture was good.  The music was good. But they were calling for divided attention.  It is like Barnum's three-ring circus.  Before that, there has only been one-ring circuses. When Barnum introduced a three-ring circus, people thought it was great because they were getting more for their money.  Of course they weren't.  They could only watch one ring at a time anyway.  But everyone was comfortably fooled for as Barnum said, 'People love to be fooled.'

Since William Crockett reportedly had started out in the film industry in 1910 doing odd jobs at Vitagraph as a teenager, "learning the business from the bottom up," I can't say to what degree these were his own ideas,  those f people with whom he worked, or  those shared with him by his composer father.
With William Christopher O'Hare's years of experience orchestrating theater tunes, with movie theaters attracting audiences away from live performances, and with two sons having entered the rapidly expanding movie theater business, O'Hare may have had more than one reason for tackling this genre.  Interestingly, he published his first silent film music during his younger son Slater's December 1917 to December 1918 military deployment to the European Front.  O'Hare's first published film pieces--the haunting Plaintive and the WWI-appropriate Military Scene--were registered for copyright only a few days before Slater was wounded at the Battle of Chateau-Thierry in mid-July.  Copies of these two pieces didn't reach the Library of Congress until six to seven weeks later, a period when Slater's survival remained uncertain.
O'Hare composed his film music for Oliver Ditson Company, a firm for which he also composed liturgical music and orchestral works marketed to school orchestras.. 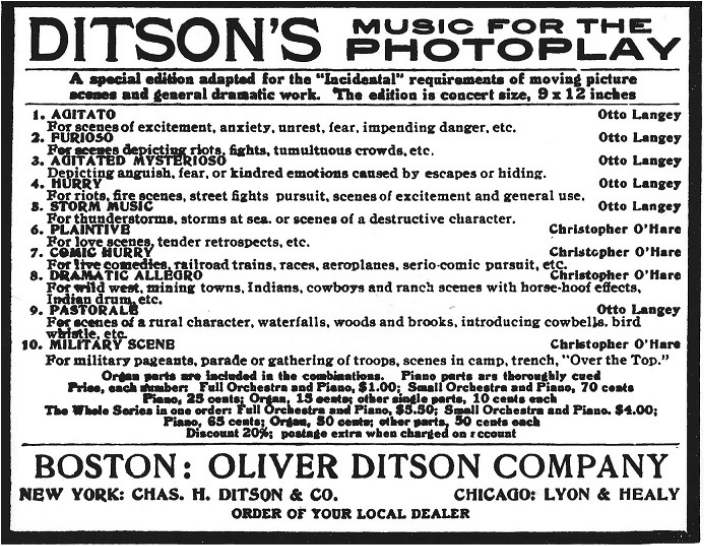 In 1918, Musical America introduced the first series of Oliver Ditson's silent film music with remarks about the growing use of theater orchestras and the effect that change had on music publishers:﻿﻿

The improvement in the orchestras in our better class moving-picture theaters all over the country has called for considerable care in the selection of the music performed.  Managers of these theaters have agreed that the music is a very important factor in the success of their enterprise and the best proof that they believe this is the fact that fine orchestras are employed at such houses as the Rialto, Strand and Rivoli in New York City.

When the moving picture boom began a few years ago and it was suggested to the music publishers that special music for the pictures would be necessary, it was met with skepticism by them. For they believed that the music could be patched together where orchestras were  engaged, and where pianists played alone (and at that time this was the case in the great majority of movie theaters), the music could be improvised.  As excellent orchestras came to be organized for pictures, the publishers awoke to the future of the moving picture theater and began to prepare orchestral music for them.

A good deal of music has been written, some of it of worth, much of it unimportant; both kinds have been used in the film theaters. The Oliver Ditson Company has recently made a fine addition to its catalog of orchestral music by issuing a series of compositions under the title "Music for the Photoplay."   The set consists of ten numbers, four by Christopher O'Hare and six by Otto Langey.

These are brief compositions clearly and legitimately written, descriptive and suggestive in character.  Both musicians have accomplished their task with credit and their orchestration is nicely and practically carried out.

Early Use of O'Hare's Film Pieces and Later Concert Performance

Film makers often recommended appropriate selections.  One example appears in the partial cue sheet below, suggesting O'Hare's Andante Cantabile and Plaintive during the second reel of The Man Hunter.

O'Hare's Film Music at Silent Film Festivals and on CD/DVD

All but the two Keaton films listed above are available on DVD with music by Mont Alto. See Mont Alto's website.  For related information, select the Photoplay Music option from the Mont Alto site.

The first three samples below the opening of the piano part of my three favorite Ditson film pieces, with some instrument parts cued in. In cases  of solo pianist or organists or very small theater orchestras, the pianist could fill in the necessary parts. Further down the page, three additional recordings appear with brief passages from the corresponding music. 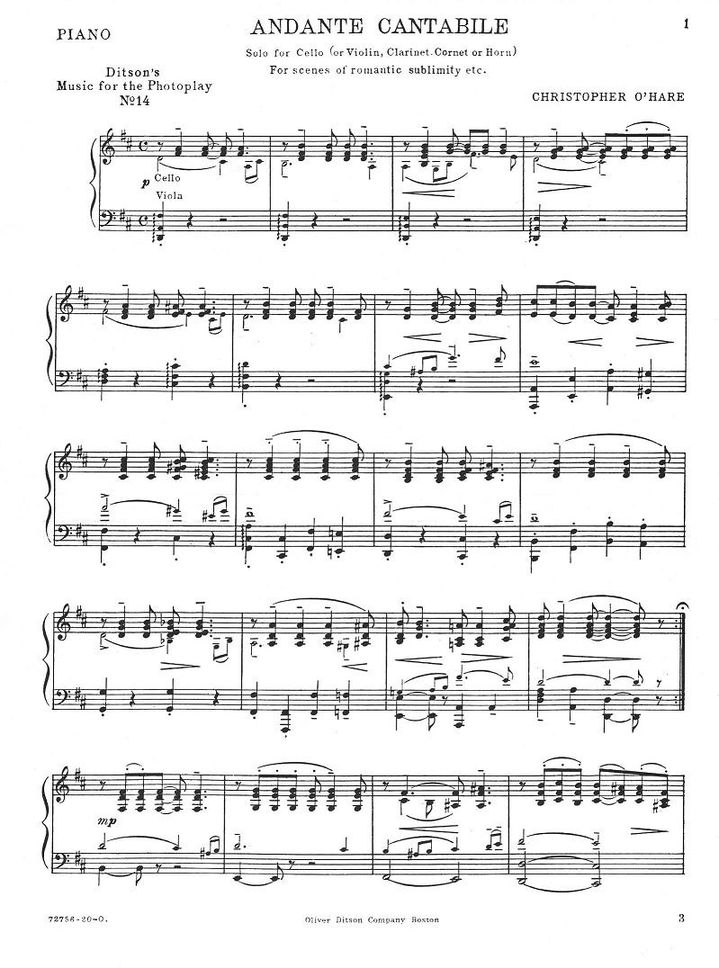 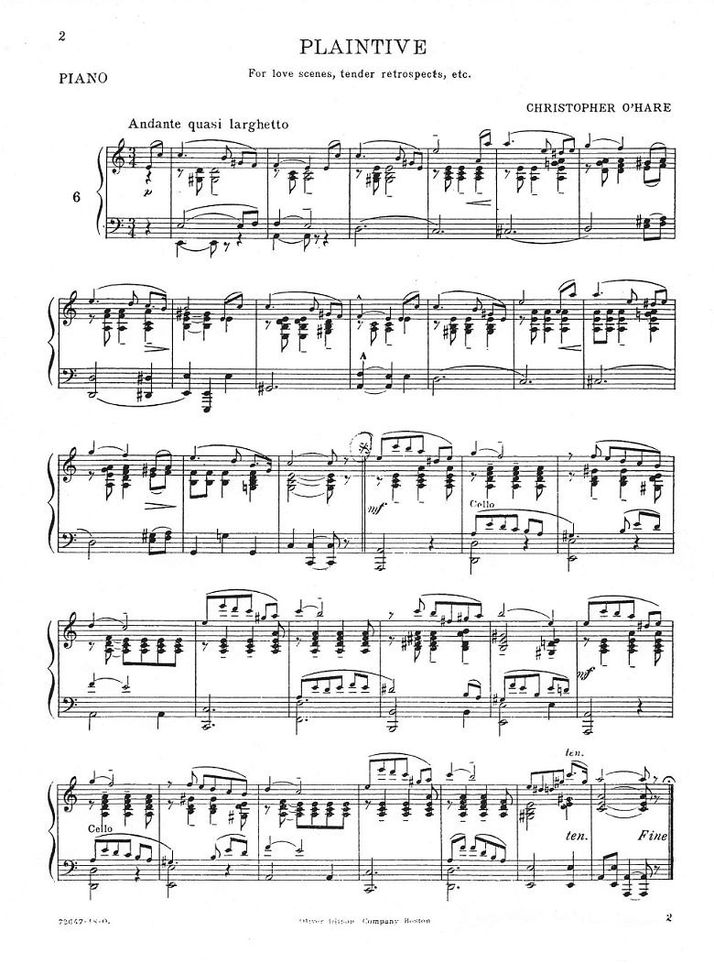 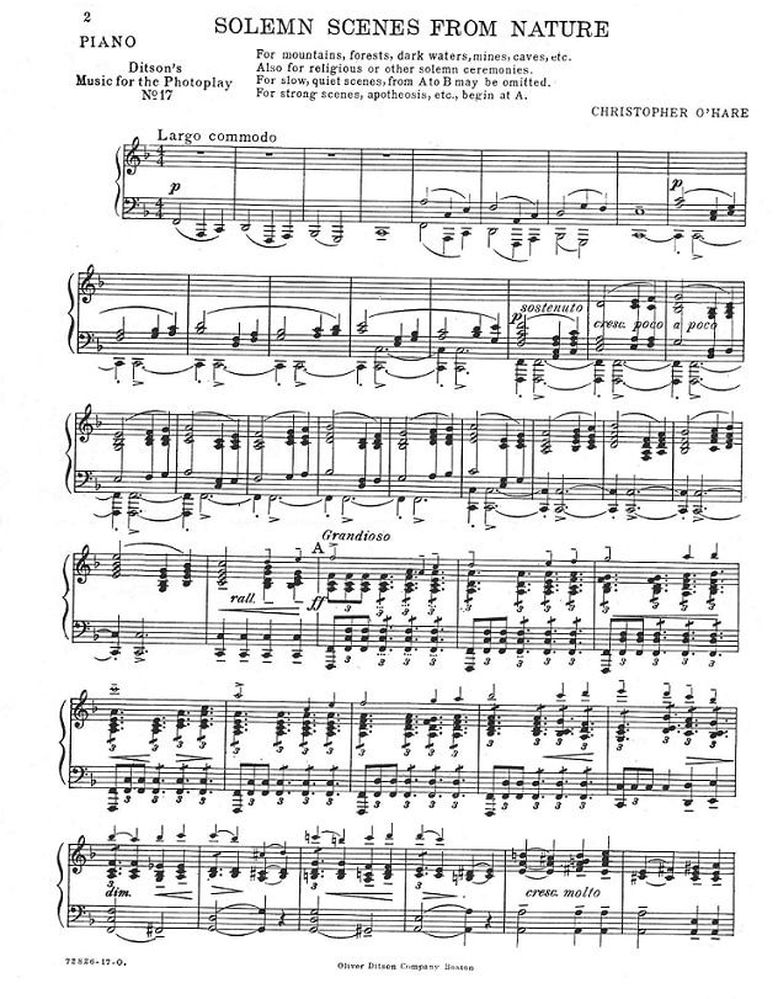