During his New York years, O'Hare continued other types of work that had filled time in Shreveport: serving as church organist, directing church choirs, and composing for both.

From1901-1906, O'Hare served as choirmaster at St. Mary's Episcopal Church in the Mott Haven neighborhood of the Bronx.
A March 1906 announcement in The Churchman reports his impending departure.

A 1915 newspaper item indicates that O'Hare left St. Mary's to become organist and choirmaster at Manhattan's Ascension Memorial Protestant Episcopal Church:
Built in 1860 in what was then the suburbs, Ascension Memorial Protestant Episcopal Church was founded as The Chapel of the Shepherd's Flock by Rev. John Cotton Smith of the Church of the Ascension.  Sometimes referred to as "the Little Brick Church in Times Square," the Chapel of the Shepherd's Flock was later renamed Ascension Memorial Church.  Small, scattered wooden houses had once characterized the surrounding area, and Ascension Memorial "loomed up large in contrast with them."  By the time O'Hare became Ascension Memorial's organist and choir director, the church at 249 West 43rd Street, between 7th and 8th avenues, was "a few steps from Times Square and "almost hidden by the buildings on all sides of it."  The congregation formerly made up of farmers and commuters had come to include many theater performers. The Rev. John  Floyd Steen, celebrating his 41years at Ascension Memorial, remarked, "I have as regular church goers many chorus girls.  Some of them have been regular attendants now for many years, and the number is increasing.  I like the theatrical people very much."

As a Tin Pan Alley music editor and former Shreveport Grand Opera House music director, O'Hare might have felt more at home with the Ascension Memorial theater flock than did Steen. 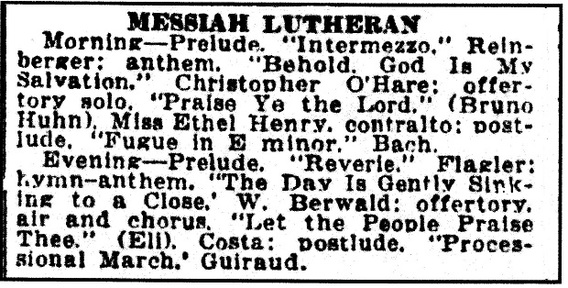 Membership in American Guild of Organists and New Music at Ascension Memorial, 1914

In 1914, O'Hare was elected to the American Guild of Organists, having passed the Associate (AAGO) exam.

In April, organist O'Hare and Ascension Memorial's choir performed O'Hare's Jubilate along with his Communion Service in Eb.  This may have been an early use of what became his published Jubilate Deo in 1915.

The newspaper account of a New Jersey organ recital O'Hare gave at Westminster Presbyterian Church, Bloomfield, NJ, on April 27, 1915, reintroduces past points and raises questions.
O'Hare's preference for the term African-American is reminiscent of Afro-American roughly 17 years earlier on the Levee Revels sheet music cover.  Although the organ concert article mistakenly indicates that O'Hare spent time "touring" rather than living in the South, thus failing to accurately describe his dozen years in Shreveport, it indicates that he studied and incorporated elements of black music in his own works--information he probably provided.  After looking through O'Hare's Cotton Pickers, Levee  Revels, Plantation Pastimes, and Cottonfield Capers prior to my Ragtime Ephemeralist article about O'Hare, Ed Berlin explained his belief that O'Hare had preserved folk melodies. This newspaper information appears to substantiate Berlin's conclusion based on his examination of the music.

I have found no other mention of O'Hare's suite Our Own Southland, perhaps an unpublished, uncopyrighted work.  It is uncertain whether the suite was inspired by his years in Louisiana or in Washington, D.C. where his grandparents once owned slaves, but the title of the suite indicates that O'Hare, now a New Yorker longer than he had been a Shreveporter, may have considered himself a Southerner and retained nostalgic memories.

Most intriguing is the title of the chosen movement--"Andante Cantabile."  Might this have been the same piece published in 1918 under that name for silent films?  If so, might other movements of Our Own Southland have survived as other published film pieces?

Finally, although O'Hare includes one personal work, his concert program further attests to his knowledge of and comfort with a variety of music from Bach's Fugue in D Minor and French church organist Theodore Salome's Grand Choeur to Haydn's aria "With Verdure Clad" from his oratorio the Creation and Charles Gounod's Funeral March of a Marionette, best known to many of us old enough to remember as Alfred Hitchcock's spooky TV theme song.

As a choir director, O'Hare set O Thou That Hearest to music for a cappella mixed voices.  To help the choir learn, he included accompaniment that would not be used during church services.

O'Hare published Jubilate Deo in A, a praise song, with G. Schirmer of New York. Based on Psalm 100, Jubilate is frequently performed as part of the Anglican/Episcopal matins (morning prayer) service.  The program posted beneath page 1 of the music documents a post-publication performance of Jublilate Deo at Ascension Memorial Church.  As noted above, it may have been performed there as early as 1914.

Willing to serve the organization rather than merely take advantage of whatever benefits his AGO certification status might offer, O'Hare became an office holder. 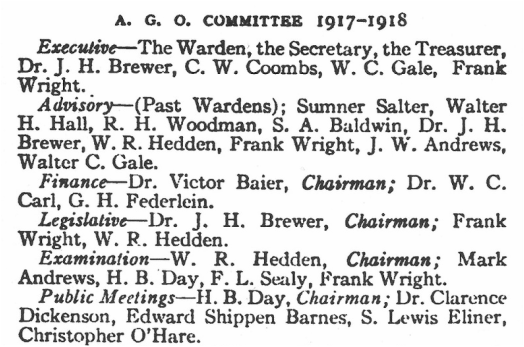 O'Hare's liturgical music for mixed choir and organ could form part of Episcopal or Catholic services. The following announcements exemplify such use:

from The Office of the Holy Communion

1922 Musical Courier advertisement
In June 1924, O'Hare's Tantum Ergo was described as new to a Manhattan Catholic church, the Church of the Paulist Fathers at 9th Street and Columbus Avenue, also known as St. Paul the Apostle Church.
A 1930 Easter Program Using O'Hare's Office of the Holy Communion (Schirmer, 1911) 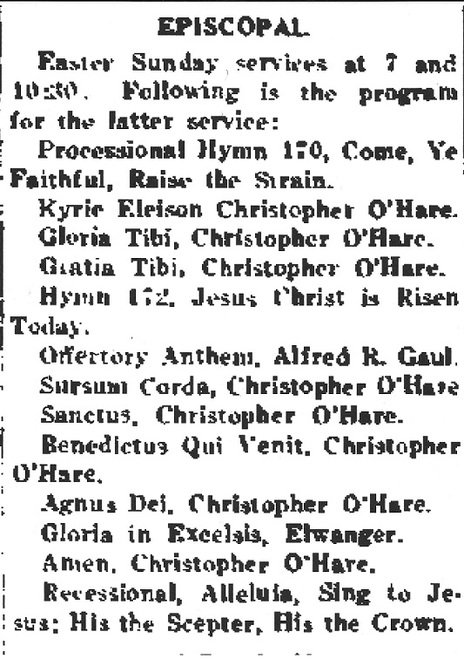