When O'Hare wasn't busy providing music for the main opera house attractions or leading local adult choral groups, he frequently devoted time to local productions, most of them starring Shreveport's young adults. Although Shreveport newspapers praised O'Hare for his tireless devotion to helping these amateur performers, he had come to Shreveport at age 21 and. at least during his early years there, would have been their peer or junior in age even if their musical leader.

Immense designated the size of the audience last night at the performance of our local opera, and also what kind of treat the audience enjoyed.  When Professor O'Hare started the music, the audience settled themselves down to enjoy the opera so long promised. . . . The affair was a credit to the city, to all concerned, especially to Prof. O'Hare, who is a most painstaking and competent musical director.  Giroflé-Girofla expects to go to Monroe shortly, and we hope it can be repeated here as well.

As usual, the local press discussed an upcoming production of Young Mrs. Wintrop and and later praised its successes:

The midsummer dullness will be in a measure dispelled by the concerts in prospect. . . .  The young men of this city, assisted by some of our best talent among the young ladies, are hard at work.  The first performance will consist of a regular old time negro minstrel show, with the clever comedian and negro impersonator, Mr. Sam N. Ford, as end man.  The orchestra, composed of the first musicians of the city, under the direction of Prof. O'Hare, are getting up some new and beautiful overtures. . . .  Six performances will be given, the first to take place on the 20th.  All arrangements have been made with street car lines, which will put on an extra number of cars for the crowd that will no doubt attend these performances.

The street car line had more than they could handle for a while before the curtain rose, but at each corner on the way the drivers would sing out to the crowd waiting that there was room for many more, which suggested that Henry Youree's cars boasted the capacity of the golden chariot, which would be found some day 'Climbing the ladder to the sky.'  The performance was after the pattern of the old style minstrel show, and took far better than the so-called 'refined minstrelsy' of the present day.  The chorus of male voices and the orchestra were very fine, showing the effect of careful training.  Some very good instrumental effects were obtained from the large orchestra, showing the great improvement of that organization. The bulk of the preparation of this performance consisted in the arranging of music and the drilling of the chorus and orchestra, and Prof. O'Hare could look on his part of the performance as a monument to his patience and skill, though it is not as dignified a success as some of his previous efforts.

In October 1892, O'Hare and a group of Shreveporters busily rehearsed for a performance benefitting the upcoming Confederate veterans encampment: 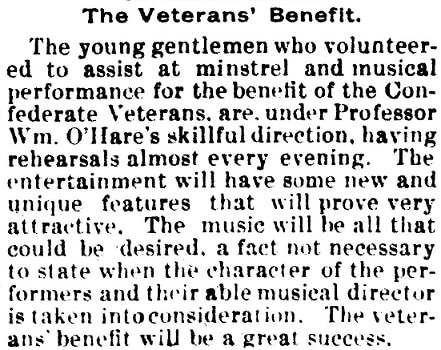 O'Hare again served as music director for Dot, the Miner's Daughter, or, One Glass of Wine (1888) by Lizzie May Elwyn, a four-act temperance drama staged by members of Shreveport's Jewish community to benefit the Hebrew Charitable Association.

Two Operettas and a Comedietta (1896)

Prof. O'Hare will be glad to see all the school children at the opera house at 5 o'clock this evening when they will be told of their great part in the celebration.  They are requested to bring their good voices with them as it is quite likely that they will be called upon to sing a few lines of some good old song.  Shreveport school children can out-sing the world anyway, and especially will this be true next Monday evening on the courthouse square.

Yesterday afternoon over 100 school children met Prof. O'Hare at the opera house where several patriotic airs were rehearsed for the Fourth of July.  It was expected that a number of the adult singers would also be present, but for some strange, unaccountable reason they did not materialize.  Several were on hand, however, and the meeting was a success.

Prof. O'Hare, who will have charge of the vocal music, promises to have a goodly number of adults and several hundred children on and about the platform during the singing of three songs.  Dixie, of course will be sung, as will also America and the Star-Spangled Banner. . . . On the stage will be seen Columbia and Uncle Sam surrounded by young ladies, representing the various states each carrying flags. . . . Prof. O'Hare wishes to call the attention of the adults as well as the school children, to the rehearsals to be held at the opera house this and tomorrow evening at 5 o'clock.  It is his desire to have at least 100 adults and 300 children to take part in the singing.  It makes no difference whether you are accustomed to singing in public or not, just so that you can sing and are willing to help on the occasion.  While all are no doubt quite familiar with the songs to be sung, a little practice will help and you are requested to be present at the time and place designated.

The program, as arranged, was carried out to the entire satisfaction of all.  The untiring effort of Prof. O'Hare is due the thanks of the community for bringing together the children, as well as the ladies and gentlemen whose sweet voices added so much to the occasion.

The Shreveport Times praised O'Hare's work but also suggested how he might have turned a bad moment into good when his effort to assemble 100 adult voices failed:

The unfurling of a sixty-foot flag as the adult choir and children sang The Star-Spangled Banner to band accompaniment was lauded as 'one of the stirring incidents of the occasion' and an 'inspiring moment' but the adult chorus, when singing alone, was declared 'too small (numerically) for the great audience.'

Prof. O'Hare should have mounted the platform and led the anxious, eager multitude in something like America, and the effect would have been wonderful and indescribable.  A great many of them probably would not have known a great deal about crescendos and de-crescendos and all that, but they would have made the grandest music ever heard here.  On occasions like that all the people want is a leader up in front of them, and they will swim in seas of melody.

Whether a pre-planned event or a response to the newspaper's suggestion, which some readers had interpreted as criticism, the Shreveport Times soon announced that O'Hare would lead a special performance for the Louisiana Press Association meeting scheduled in Shreveport:   "Prof. W.C. O'Hare will lead a national song chorus for the entertainment of the press."

In the same issue in which the Times announced O'Hare's July 8 Press Association performance, the paper clarified its earlier remarks about his leadership on July 4:

Some unmusical souls vainly attempted to make Prof. O'Hare believe that this paper was criticizing him when it stated that he should have taken the platform and led that vast audience into melodious paths.  That was in no way a reflection upon the capable professor who, had he been allowed full swing, would have had a great deal more satisfactory singing.  He recognized the fact that a half dozen voices had but little effect on a crowd of several thousand people and that they cannot be heard a dozen feet away, sing they never so well.  On such occasions the people, the masses, should do the singing with an energetic leader like Prof. O'Hare in front of them.  A couple of turns at the first verses of America or Columbia evening before last and the great crowd would have caught the spirit and then there would have been a wave of melody reaching to the skies.  People don't want scores, and they couldn't use them anyway, and they care nothing about whether they are half a note or a dozen sharp or flat.  Such technical errors are entirely covered when a thousand people open their mouths and sing some good old song.  An example of this kind is furnished in the Bible where it tells of the escape of the children of Israel across the Red Sea from the pursuing hosts of Pharaoh.  When safely out from the divided waters, Miriam led the exultant multitude in the most rapturous and spontaneous songs of praise, the glory of which through all the long ages has never been diminished.