With The Czarevitch, O'Hare explores another dance form, this time from Poland. The Music Trade Review commented, "Wm. C. O'Hare, notable for his characteristic numbers among which Levee Revels is most popular and which was played by Sousa and his band, has achieved a great success in The Czarevitch, a stately mazurka."
Listen to The Czarevitch and download a transcription at Bill's Audio Reference Library
Late 1902 and early January 1903 newspaper discussion of Russian succession may have inspired O'Hare's mazurka title.  Because Nicholas and Alexandra had four daughters and no son, the Czar's only surviving brother, Grand Duke Michael, had been designated Czarevitch, the heir apparent.  Any son subsequently born to Nicholas and Alexandra would replace Michael as Czarevitch.  Reports abounded of the ill health of all three--Nicholas, Alexandra, and Michael.  Although the reports were officially denied, rumors left the line of succession in question and raised public interest in the U.S.

Alexandra would eventually give birth to son Alexei in August 1904, too late to have inspired O'Hare's mazurka.

If O'Hare possibly composed Ky-isses as a teaching piece in a simplified Chopin style, the Witmarks demonstrated their business sense by also publishing it for band, orchestra, mandolin orchestra, and guitar and mandolin solos. 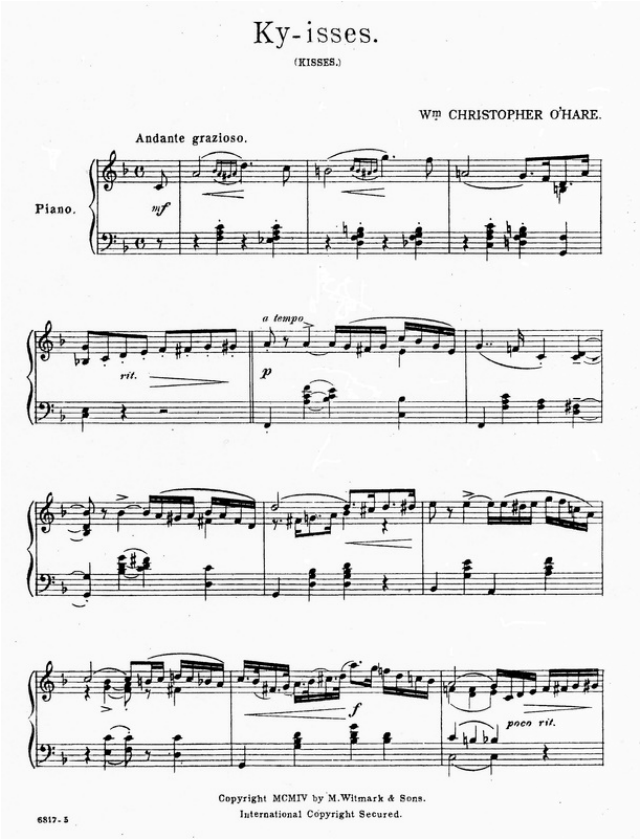 In a 1999 email, Ed Berlin described The Sand-Dancers as O'Hare's most original rag because it appears to be entirely original rather than inspired by black folk tunes.  On further examination, Berlin changed his original evaluation of The Sand-Dancers as a rag, concluding instead that the piece is too filled with the unexpected to be viewed as a rag despite some ragtime syncopation:

Only the A section is characterized by ragtime syncopation, and even that section is curiously 'un-rag-like.'  While the first measure begins like a rag, the typical ragtime forward motion stops in measure 2 and again in measures 4, 10, and 12.  At the second measure, O'Hare indicates two staccatos and one 'sit-on-it' accent, and he repeats these performance instructions throughout the piece.

In strain B, O'Hare continues playing with us.  No straightforward rag-type drive.  It's all too delicate.  For me, its 'non-rag' quality resides in its whimsical nature.

Download a transcription from Bill's Audio Reference Library
Although The Sand-Dancers departs from the folksy sound of Levee Revels, Plantation Pastimes, and Cottonfield Capers,O'Hare may have intended the piece to evoke the spirit of sand dancing as described by vaudevillian Pigmeat Markham:  "We kept a pile of sand in the 'possum belly' of the railroad car--a compartment for tools--and spread some of it on the stage for our dance.  The music stopped while the audience listened to our feet scraping in tempo."

Author Douglas Gilbert provides additional insight:  "The dancing, all on the balls of the feet, was done in shuffles and slides instead of taps.  The soles of the shoes were thin and hard, and the dancer, shifting and digging in the sand, produced a sharp, staccato sound which could be doubled and tripled at will."

Although the pauses O'Hare builds into The San-Dancers are far too short to allow for dancing, might anyone performing the song with dancers have paused longer?
Interestingly, sand dancing film footage reveals that not all musicians paused for the dancers as Pigmeat Markham described.  Notice that the music in these clips featuring Bill "Bojangles" Robinson and Ned Haverly does not stop.
When we consider how O'Hare created a "cane hop effect" in his orchestra and band sores of Levee Revels and Plantation Pastimes by drumming on the drum's hoop, might he have intended the Sand Dancer's staccatos to hint at the staccato of the dancer's hard-soled shoes?  In other words, even without sufficient pauses, might O'Hare have been experimenting with preserving yet another black dance through music?

Unfortunately, copyright records don't indicate the existence of band or orchestra arrangements that might have included a similar "sand-dance effect."

O'Hare composed Dreamland Waltzes for a particular time and place--the opening of a spectacular 25,000 square-foot ballroom at Coney Island's Dreamland Park.
In the wee hours of what should have been the 1911 season's opening day, fire broke out during last-minute repairs to a ride named Hell Gate.  The blaze spread, rapidly, killing animals that couldn't be evacuated quickly enough, forcing many people to escape the island by boat, and eventually leveling Dreamland.  Seriously under-insured, the park wasn't rebuilt.  Whether Dreamland Waltzes lived on as a nostalgic memory in the minds of Coney Island dancers and merry-makers isn't known.

Detailed fictional accounts of the Dreamland Park fire appear near the end of Kevin Baker's 1999 novel Dreamland and Alice Hoffman's 2014 novel The Museum of Extraordinary Things.
Background graphic, top of page: detail from The Sand-Dancers cover