Although Blue Bird's Song hasn't been located, Rule's social column reveals that O'Hare was composing during his earliest Shreveport years and quite likely had been doing so in Washington, D.C. before being hired as music director at Shreveport's Grand Opera House. However, no record of earlier compositions has been found.

During O'Hare's 1892 visit to Washington, D.C., the Washington Herald commented, "Mr.O'Hare has found time to write a considerable quantity of very good music.  His 'Americanisms' has taken in the South like wildfire, while some of his other compositions are not far behind."

The auxiliary verb has appears to indicate that the word Americanisms serves as a proper noun (in this case, the title of a single piece of music) rather than as a common noun indicating a style of music (music that is in some way typically American). However, because I have not located other mentions of the music, or any manuscript or published music that might fit this description, it's possible that the auxiliary verb should have been have and that O'Hare's "Americanisms" may have been early folk-inspired (possibly African American) pieces.

The opening reference to "a considerable quantity" of O'Hare compositions indicates that he may have composed a noteworthy number of lost pieces.

O'Hare's Veni Creator currently holds the distinction as the earliest located copyright on any music O'Hare composed.  An advertisement in Etude identifies it as a sacred vocal trio for soprano, alto, and tenor with Art Thou My Father? as the title.  Since O'Hare served as organist and choir director at Holy Trinity Catholic Church in 1892,  that choir probably performed it although no record has been located in Shreveport newspapers.

Copyright entry, September 12-16, 1892 catalog listing
My Ask-a-Librarian request to the Library of Congress has failed to turn up a copy of Veni Creator.

Presumably, an 1892 Washington Herald article referred to this piece and others not known or located when the paper wrote of O'Hare, "a prominent publishing firm of this city will soon issue a series of sacred pieces which he considers among his best."

Elsewhere, In a complete listing of orchestra selections that evening, the piece is identified as Ecentrique without attribution to O'Hare.

This string quartet appears in Part Two, the student section, of O'Hare's June 1893 Dudley Buck Choral Society concert program.  The pizzicato technique hints that one or more of the string instruments probably reproduced the sound of a ticking clock.

In the Woods of Tennessee (Junius Hart, New Orleans, 1894) 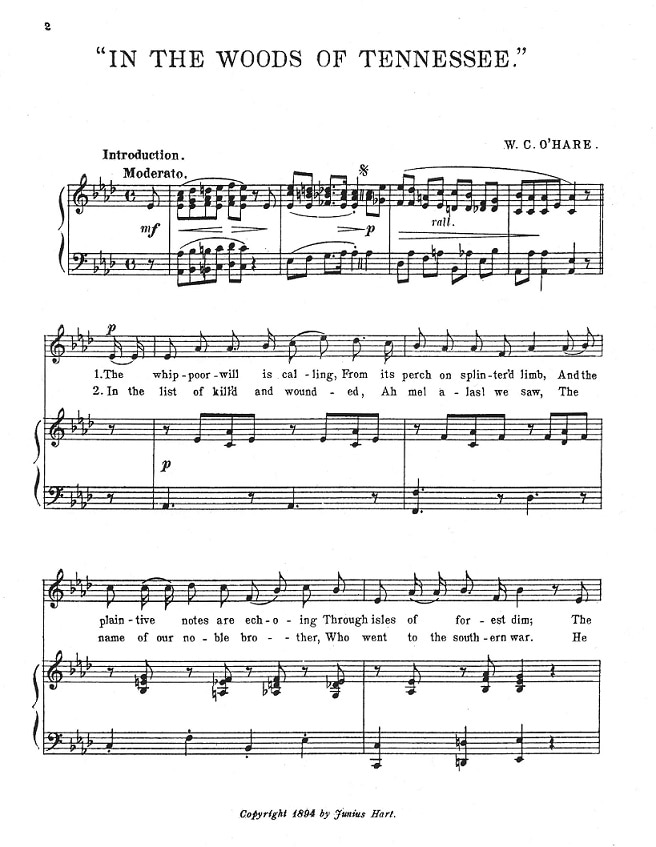 In the Woods of Tennessee at the Grand Opera House
In the Woods of Tennessee was published in 1894 as a song rather than an instrumental piece.  One can guess that it was sung in Shreveport at some point although I haven't been able to confirm this.  However, O'Hare also arranged the piece for small orchestra as indicated by the social columnist's comment on its 1895 performance the evening of the play Monte Cristo:

The orchestra, although composed of only three artists and as many instruments, in the hands of Prof. O'Hare, Mr. Gus Klein, and Harry Weil, was never better, and the Soldier's Chorus,  In the Woods of Tennessee, and other productions were most excellently rendered. The company, play, and music will always be memory like a sweet dream.

Had this been an orchestral accompaniment to a vocalist or vocal ensemble, "Pansy" almost certainly would have named the singer or singers as was this social columnist's normal practice. 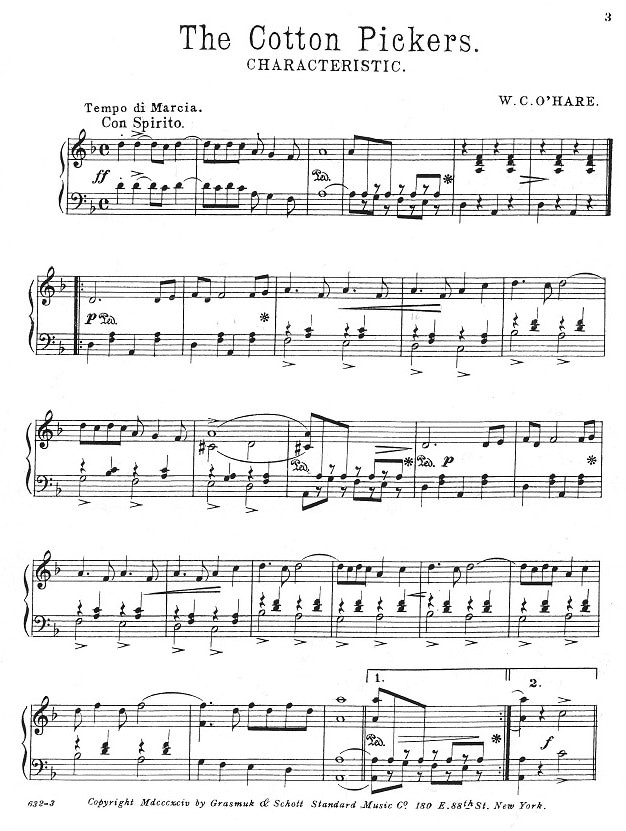 Planters in the Red River area around Shreveport were known for their cotton production, and Shreveport served as transportation hub. Large numbers of cotton pickers were brought in for the harvest season.  On the levee to one side of downtown, stevedores loaded baled cotton onto riverboats destined for New Orleans and beyond.  A Shreveport paper describes the life-charged harvest atmosphere:

Yesterday Commerce Street was crowded with wagons and the pavements and stores with negroes full of life and animation.  The army of cotton pickers--old and young--were on the move for the adjacent cotton fields. They were securing a week's supplies and will not be in evidence again until next Saturday when they will draw their money for their work--a stipulated price per 100 pounds of cotton in the seed. . .  .  It takes a cotton picker all Monday to get ready for and reach the destination.  Saturday is a holiday in which to spend his money and go 'shopping.'  Four days constitutes a week's work with the Southern cotton field hand.  The other three days are for frolic and church going, not counting rainy days.  And there is the southern black cotton picker!

As a Shreveport resident for roughly five years, O'Hare would have experienced the cotton pickers' annual arrival and payday visits. Whether or not he picked up a melody from them is impossible to know.

In 1898, the Shreveport Times remarked, "The Cotton Pickers, published some time ago, is in the repertoire of nearly all the orchestras at the roof gardens, etc., and has been performed by bands at all of the leading watering places in the vicinity of New York."

The New York Evening Post helps support Shreveport's claim of its hometown composer's popularity by stating that John Philip Sousa, the country's leading band master, was among those who had accepted The Cotton Pickers.

This would not be Sousa's last acceptance of an O'Hare cakewalk.

The following O'Hare musical settings for sacred texts appear in newspapers during this time:

O'Hare's first two Witmark publications were Heliobas and The Awakening of Venus, copyrighted the same day.

Source of the Title and a Mysterious Inscription

Other clues strengthen the connection with Correlli's novel. One such clue came to me by extraordinary good luck.  Before I requested the color copy from the Library of Congress, New York Public Library had sent a black and white copy, which had arrived with a surprising handwritten inscription.

But there's more.  On January 16, 1900, during time back in the United States before returning to Paris, Clarence Eddy gave a pipe organ concert at Shreveport's First Methodist Church, one of the places where W. C. O'Hare occasionally served as organist.  Eddy's sharing that organ, if only for a brief time, provides a more satisfying possible motivation.  O'Hare could have sent the sheet music to Eddy while he was still in Paris, given it to him in Shreveport, or sent it to him later.  However Eddy received the signed copy of Heliobas, O'Hare had given the world-famous organist a reason to remember a younger Shreveport organist on the verge of relocating to New York City.

How O'Hare's autographed gift landed in the NYPL collection is another question.  Perhaps the library purchased the music when Merwin-Clayton Sales Company auctioned Eddy's library in New York City during December 1910. 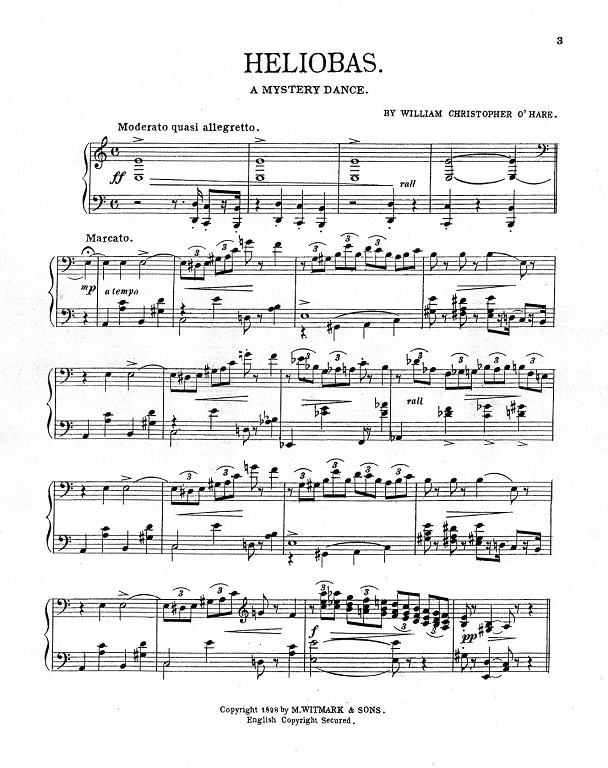 Someone has suggested that O'Hare might have intended his use of cascading triplets to mimic electricity. When I asked pianist Richard Dowling for his opinion, he pointed out that any musician could individually interpret the sound of electricity, but Dowling added that he couldn't rule out the possibility. Having previously commented that Heliobas reminded him of Gounod's The Funeral March of the Marionette, Dowling turned his attention to triplets at the bottom of the first and second pages and in the middle of the fourth--pages numbered 3, 4, and 6. The page 3 example appears above.

They certainly reinforce the dance-like character of the work…indeed it is subtitled, "A Mystery Dance" after all…and perhaps that's why I hear a resemblance to Gounod's dancing puppet.

As for a musical representation of an electrical current in that particular phrase, that's tough to say. Electricity would've been a new-fangled (and rather scary) invention in 1898. . . .  Depending on how one performs Heliobas, that triplet passage could be made to sound "scary" and electrically charged. Whether it depicts an actual electrical current, I really couldn't say, but if you have some sort of point of reference or proof of that, it wouldn't be inconceivable.

Given the possibility that O'Hare may have intended those parallel descending triplets or other sets of ascending and descending or descending and ascending triplets to represent electricity, another interesting question arises concerning a possible theatrical us of the piece.
Because I can only guess at O'Hare's intention based on the literary inspiration for his title, I'll end with Richard Dowling's final points. Dowling calls Heliobas "a charming salon piece . . . albeit one with a bit of a sinister undertone thanks to its being composed in the key of A Minor and having its main melody in the tenor register of the piano (mimicking a bassoon . . . at least to my ears)."  Considering the spooky bassoon-like sound an "orchestral influence," Dowling lists two other musical elements contributing to that spookiness:  "The clever chromaticism and quick modulations are rather unsettling (on purpose) and help give the music its 'mysterious' flavor, too."

Copyrighted the same day as Heliobas, this O'Hare waltz includes a published dedication to the famed Adelaide Herrmann.
On July 31, 1898, The Shreveport Times noted that The Awakening of Venus had "attracted the attention of John Philip Sousa."  If accurate, this would make it the second O'Hare composition to have attracted Sousa's notice, and it wouldn't be the last. 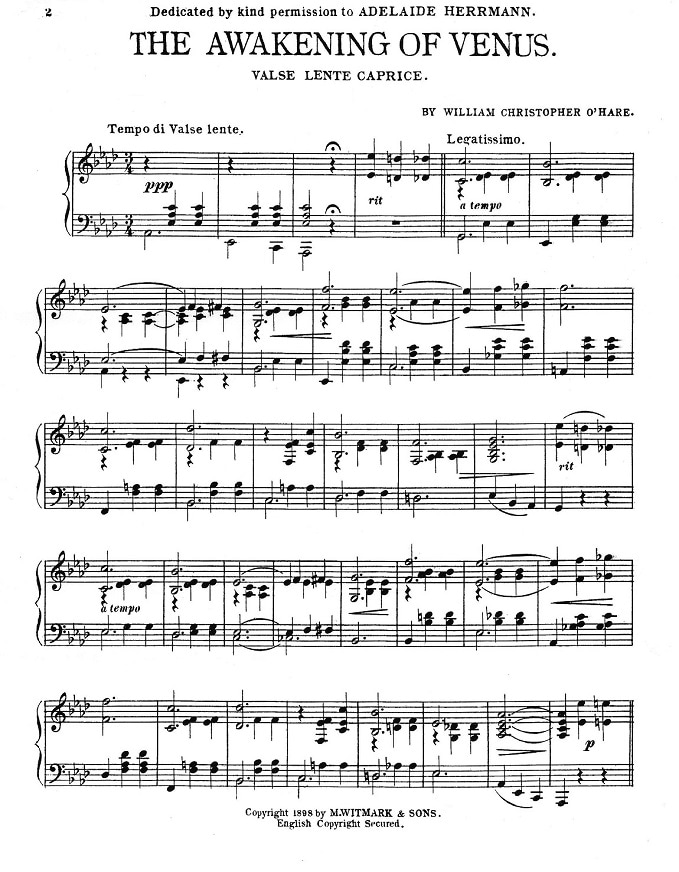 In December 1897, approximately three months before Witmark copyrighted The Awakening of Venus, the widowed Adelaide and nephew Leon performed at the Grand Opera House.

One reporter commented on Adelaide Herrmann's show and fame:

The Herrmanns are giving this year probably the most elaborate and interesting performance of mirth, magic and mystery that has ever made a tour of the country.  The company is known as Herrmann the great company and judging by the wonderful enthusiasm with which they have been received in every city visited the title of "great" is very appropriate.  They carry two carloads of gorgeous scenery and twenty people, and are headed by Leon Herrmann, the nephew and successor to Herrmann the great, and Adelaide Herrmann, the talented and handsome widow of the great magician. The new Herrmann will make his first appearance here next Monday night, December 20th . . .

The public needs no introduction to Adelaide Herrmann. For many years the constant companion and assistant of her husband, and her name is as familiar to theatre goers as his.  Mme. Herrmann will appear in the brilliant and dazzling dances that have delighted and astonished audiences in every part of the world.  These spectacular dances are the most elaborate and bewilderingly fascinating that have ever been on stage.  Mme. Herrmann has added to her repertoire a new dance invented by herself during the past summer which has caused a genuine sensation.  It is the "fire dance," and to the audience it seems that Mme Herrmann is in the centre of a column of actual flame and smoke, so realistic is the imitation of fire produced by the wonder flights used and the mass of gauze in which she is clothed.

It's uncertain whether Adelaide Herrmann ever danced to the music O'Hare dedicated to her--a piece whose title had probably been inspired by classic art.  However,  he must have hoped she would.

Adelaide Herrmann, the Queen of Magic, died in 1932, approximately 34 years after O'Hare composed The Awakening of Venus.
Background image, top of page: portion of Heliobas cover