According to David Reffkin, O'Hare's orchestration of Zita's lightly syncopated Slavery Days illustrates the orchestrator's professionalism and sensitivity to the variety of ensembles playing the piece.  Although Zita quotes Stephen Foster's Massa's in the Cold, Cold Ground, Reffkin explains that O'Hare reveals sophistication absent in early minstrel shows and stock arrangements.  O'Hare calls on more instruments than customary. For example, he signals flute to change to piccolo, drummers to change from playing on the drum's hoop to sand paper as strain A repeats, and dance orchestras to play the melody with bells and to tremolo on each note to sustain it, but concert bands to limit the bells or strike each note only once.

Approximately 1971, the Dawn of the Century Ragtime Orchestra, which grew out of California's Maple Leaf Club, recorded O'Hare's orchestration of Slavery Days on its first LP.

Victor catalog, 1917
Charley Straight's Humpty Dumpty (Witmark, 1914)
O'Hare arranged Humpty Dumpty for band and orchestra.  According to Reffkin, O'Hare's orchestration contains several interesting features. "The first thing to notice," Reffkin suggests, "is the credit for O'Hare--'Orchestration by'--a more sophisticated term than the usual 'arranged by.'" O'Hare employs many articulation marks for winds as well as special cello effects, including harmonics, pizzicato, and pizzicato with the thumb. The latter effect, according to Reffkin, "creates a more rolling guitar-like texture." 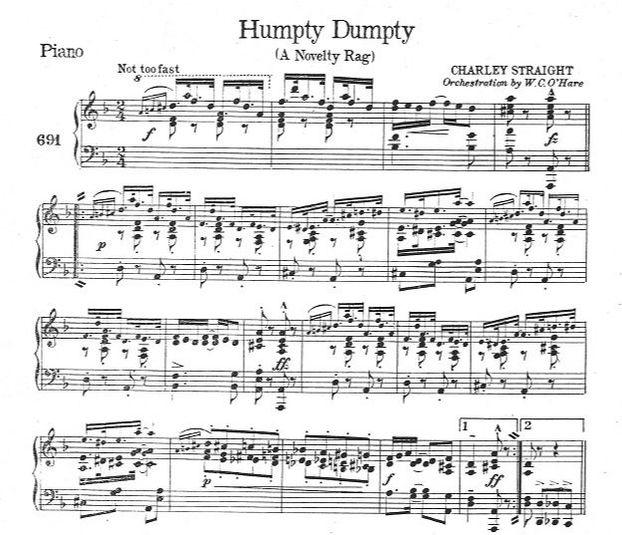 Reffkin begins his overall evaluation of O'Hare as orchestrator:

In all three examples, and in other arrangements of his, O'Hare tended to use more detailed articulation marks and notations than are found in standard orchestral repertoire publications. The musicians would have appreciated this and played more to the specific instructions, causing the arrangement to have a more distinctive sound and the orchestra to have a more unified sound.  All three of these example pieces were published in expanded instrumentation (not always the case in publications) including oboe, bassoon, and French horns.  All call for divided first violin section, rather than the typical one player or unison section.

Reffkin adds that O'Hare commonly used counterpoint as he alternated cello and trombone in the counter melody "instead of merely doubling."  Because counterpoint did not exist in the original rag, arrangers needed to add it.  "There were mediocre and excellent counterpoint writers," Reffkin concludes;  "O'Hare was of the latter."

Perhaps as a result of O'Hare's Levee Revels, Plantation Pastimes, and Cottonfield Capers, Witmark assigned occasional projects that would have appealed to those who loved popular African American-themed music, including cakewalks and rags.  However, O'Hare's overall orchestra and band arrangements of popular music ran the gamut of popular instrumental styles.
Download O'Hare's Ethiopia band score from the Library of Congress

Listen to the New York Military Band's 1908 recording of Old Daddy Peg-Leg, probably O'Hare's arrangement shown above.  Note the peg-leg effect.
Click here to continue to Rags and Instrumentals, Part 2 (1908-1921)
Background image, top of page:  Cover detail from The Story of the House of Witmark:  From Ragtime to Swingtime