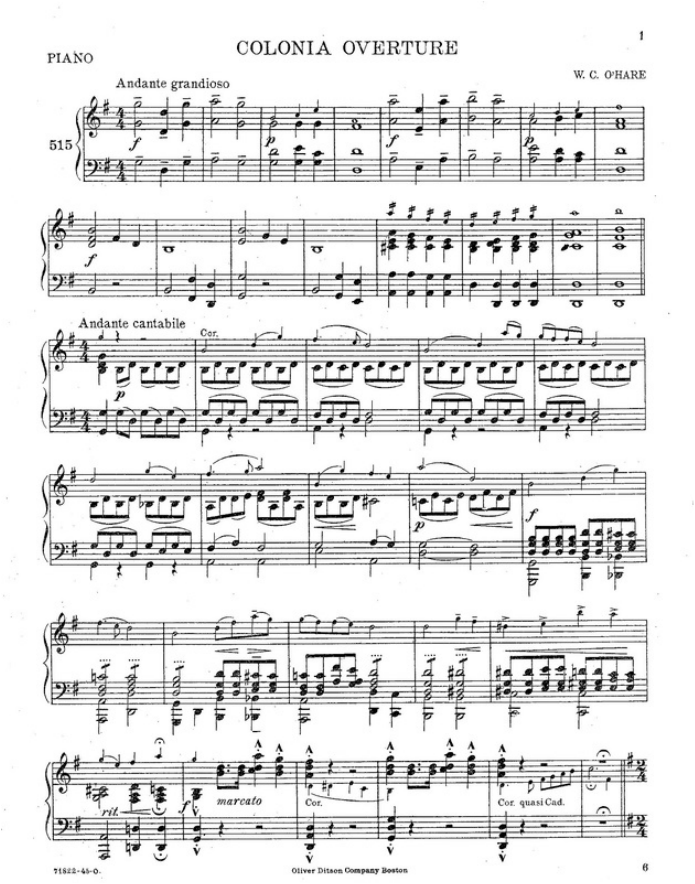 Advertisement, February 1917
Because Oliver Ditson would begin issuing O'Hare's silent film work in 1918, Colonia Overture may have shown Ditson what O'Hare could potentially contribute to its new Ditson's Music for Photoplay series. All but one of the photoplay pieces now behind him, O'Hare resumed writing for amateur orchestras. 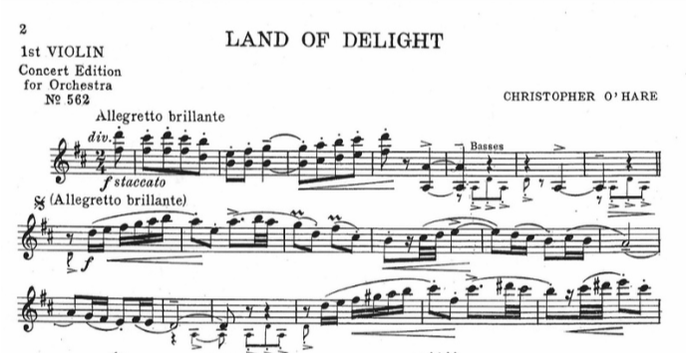 Acknowledgement in The Etude of O'Hare's Reputation (1922)

Writing of impending publication of an orchestration collection, The Etude lists a handful of "representative specialists in the orchestra line" contributing to the folio, including O'Hare: 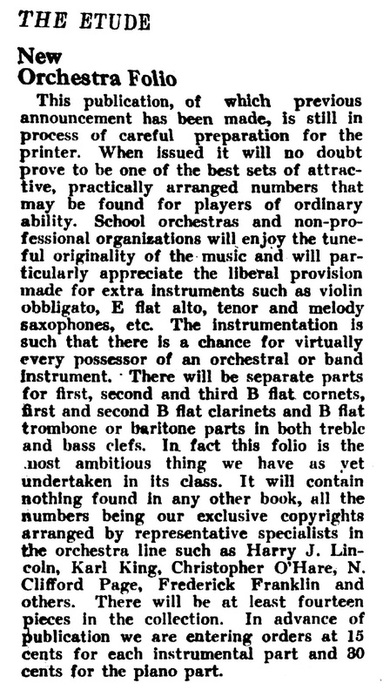 During 1923-1924, O'Hare composed or arranged several pieces of music for a Canadian pair living in the U.S.-- Douglas Durkin, a former University of Manitoba professor teaching at Columbia University, and Norwegian-born Martha Ostenso, Durkin's former University of Manitoba student and future wife. Among the Durkin-O'Hare collaborations were Glory of the Dawn and What Is a World, My Boy. 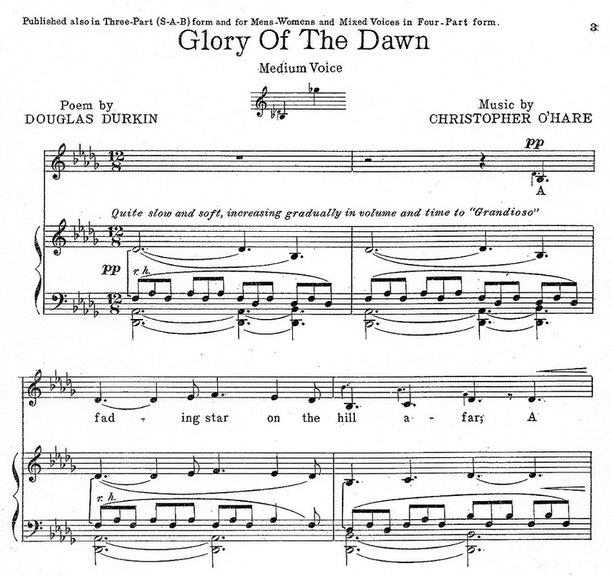 Opening measures of O'Hare's setting for Durkin's poem
Although Ostenso was best known for Wild Geese, her novel that critics hailed as a masterpiece of Canadian Realism, she also published A Far Land, her only poetry volume (1924).  O'Hare set several of her poems to music, the most successful of which appears in part below. 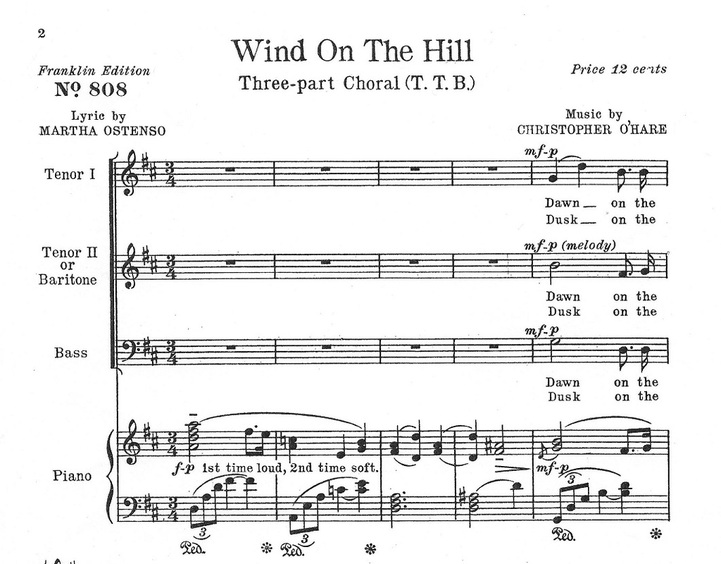 Opening of Wind on the Hill

There's a Little Bit of Color and It Means the World to Me, a Patriotic Poem Setting (Witmark, 1925)

Originally published in 1919, Elisha Whipple McGuire's four-stanza poem, later set to music by O'Hare, speaks of patriotic feelings stirred by sight of the flag, recounts a battle in which the flag was carried, talks of others picking it up in the event of the carrier's death, and concludes with the determination to "raise the bit of color as the dearest thing of all."
All the journalistic attention to patriotism and the flag would have created an ideal climate for O'Hare's setting of Whipple's poem.  It's impossible to know if Anne and Laura O'Hare might have liked the earlier poem or if their deaths might have been on O'Hare's mind when he set it to music. 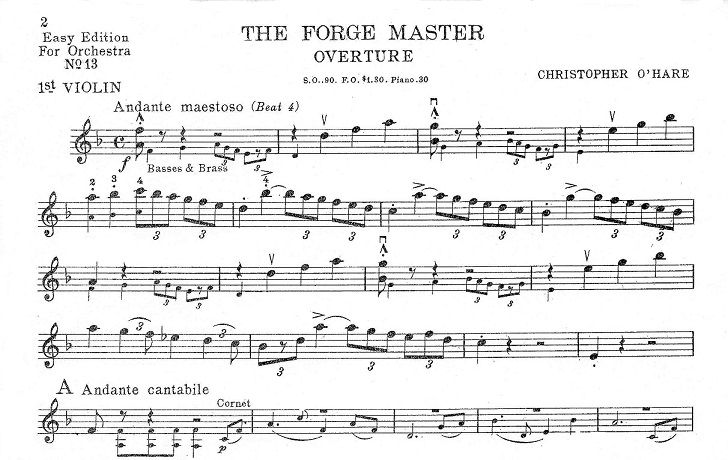 Beginning and end of 1934 article from Benton Harbor, MI 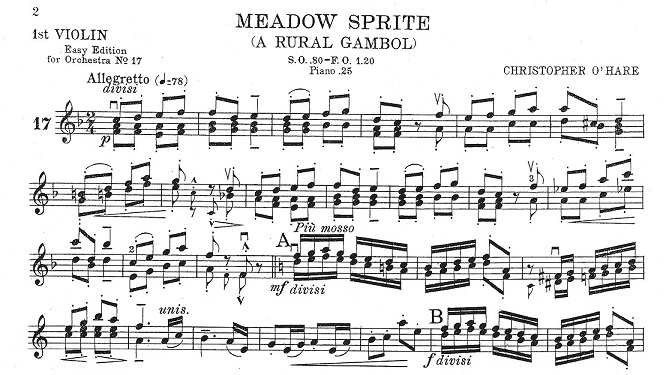 The selections are not hackneyed, and directors of grade school orchestras will welcome both folio and two recent additions to the "Easy Edition" series.

As indicated by the copyright record,  this piece should tell a story through music, a characteristic that would interest young performers.

In January 1934, the country was battling the Great Depression and the Dust Bowl.  Baby Face Nelson, Pretty Boy Floyd, John Dillinger, and Bonnie and Clyde remained on the loose, not to meet their fates until later in the year. In Europe, Stalin and Hitler were consolidating their powers.  Yet Americans were finding ways to lift their spirits.  Prohibition had recently been repealed. Jean Harlow and Betty Grable were among the hottest theater and fashion icons. Shirley Temple and Donald Duck made their film debuts. Cole Porter's Anything Goes opened on Broadway. Flash Gordon first appeared in comic strips. Time Magazine named Franklin Delano Roosevelt its Man of the Year.   O'Hare's Happy Land chorus asked, "Are we down-hearted?" and answered "No!" 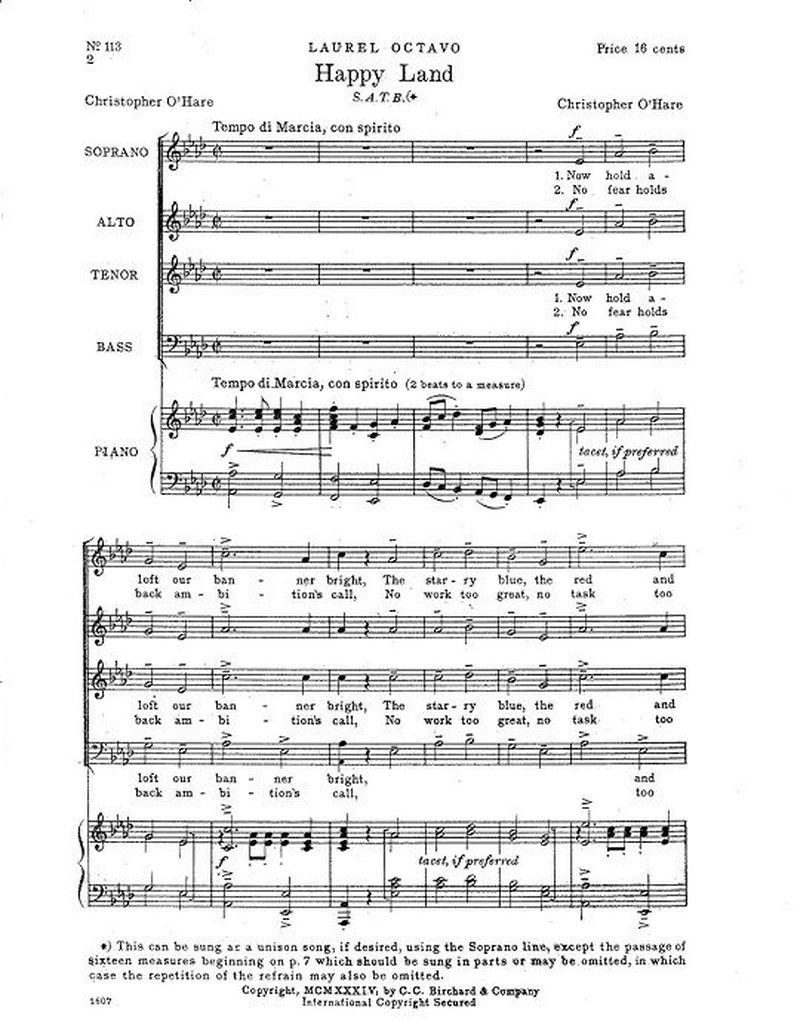 From Behind the Cloud (copyrighted 1934; unpublished)

The latest O'Hare composition for which I can confirm a copyright date is a mysterious unpublished song with words and music by 67-year-old O'Hare.  Because the song is unpublished and O'Hare has been dead for more than seven decades, as his closest living descendant I take the liberty to reproduce it here for educational purposes only. 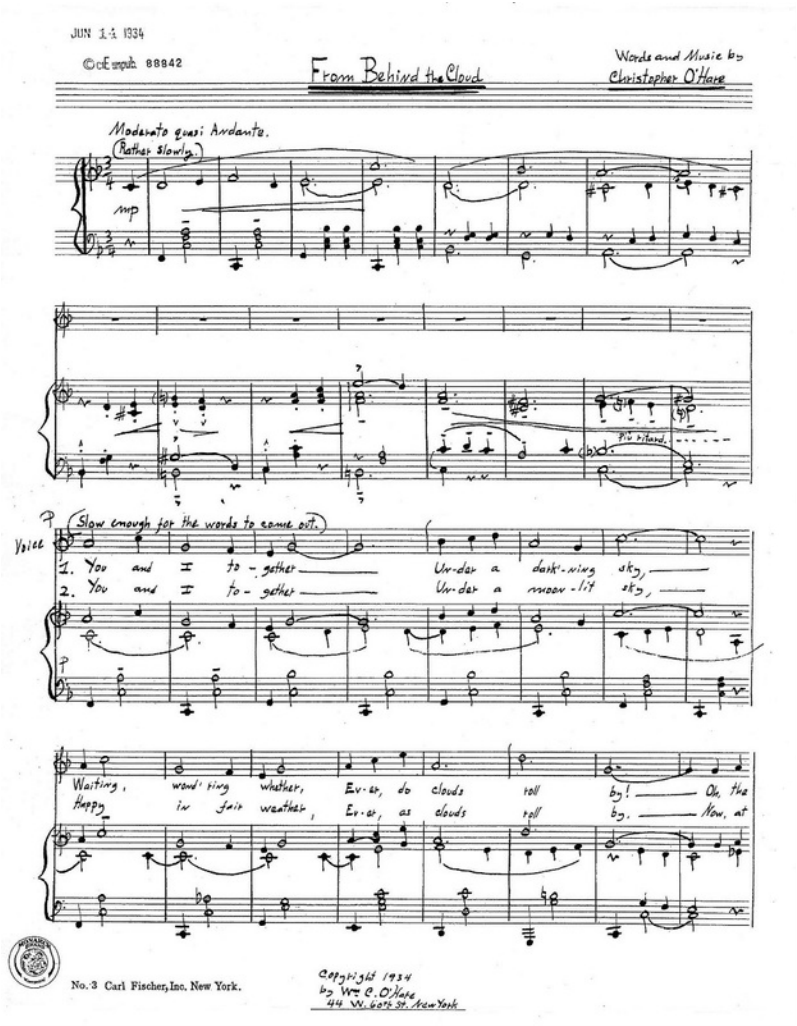 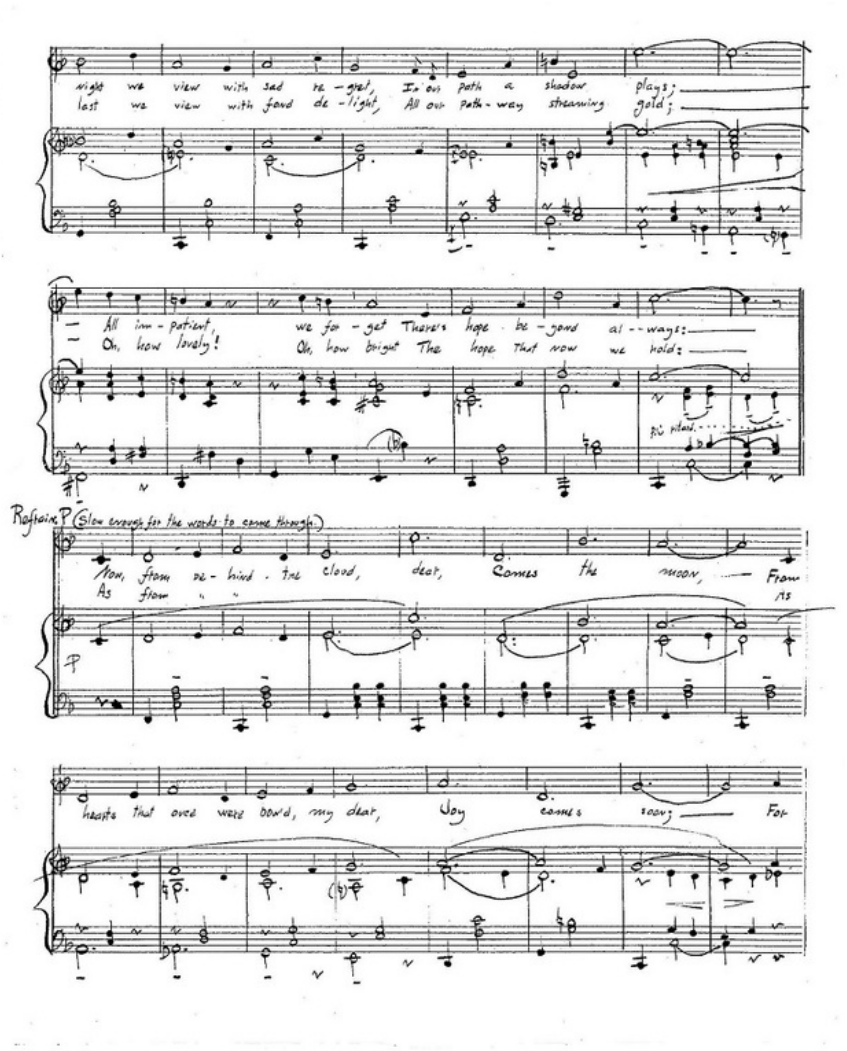 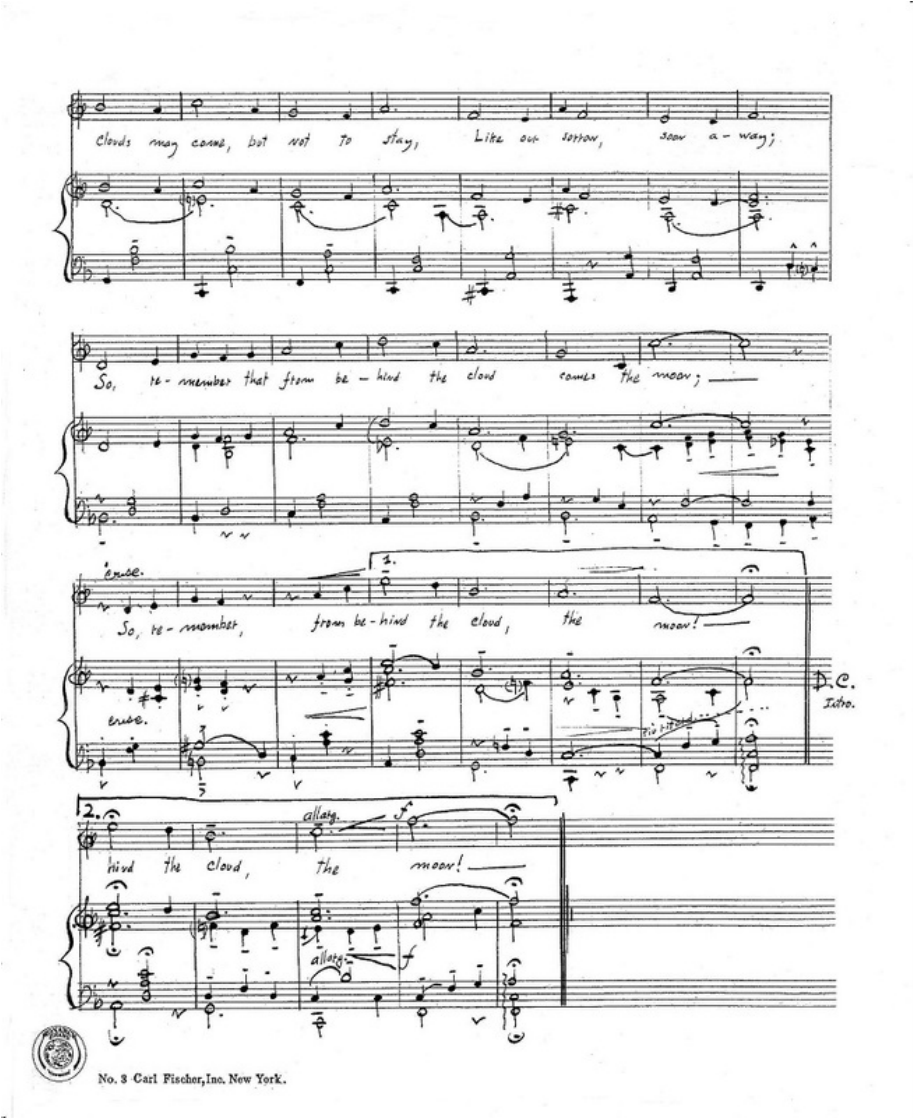