The year before Witmark published O'Hare's first four-part voice arrangements of songs written by several of Witmark's popular composers, the firm issued a few of his own songs, beginning with its Standard Quartettes series.
The Monkey Quartette (Witmark, 1905)
Although lyrics vary slightly from source to source, this 1879 newspaper item illustrates what former minstrel O'Hare may have known for many years:
O'Hare' did not  arrange The Monkey's Wedding's lyric for four voices, renaming it The Monkey Quartette. Instead, he had his fun with a portion of verse 1, focusing on the monkey's kiss and omitting the baboon's sister's yell in the church. By ignoring part of the original opening verse and all of the subsequent verses, he makes a nonsense song even more nonsensical. 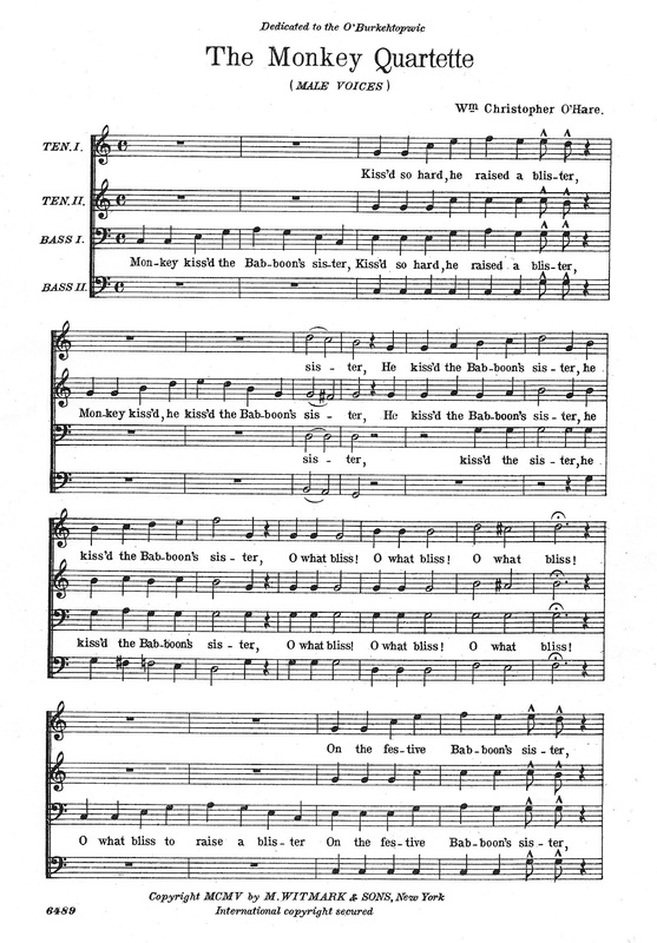 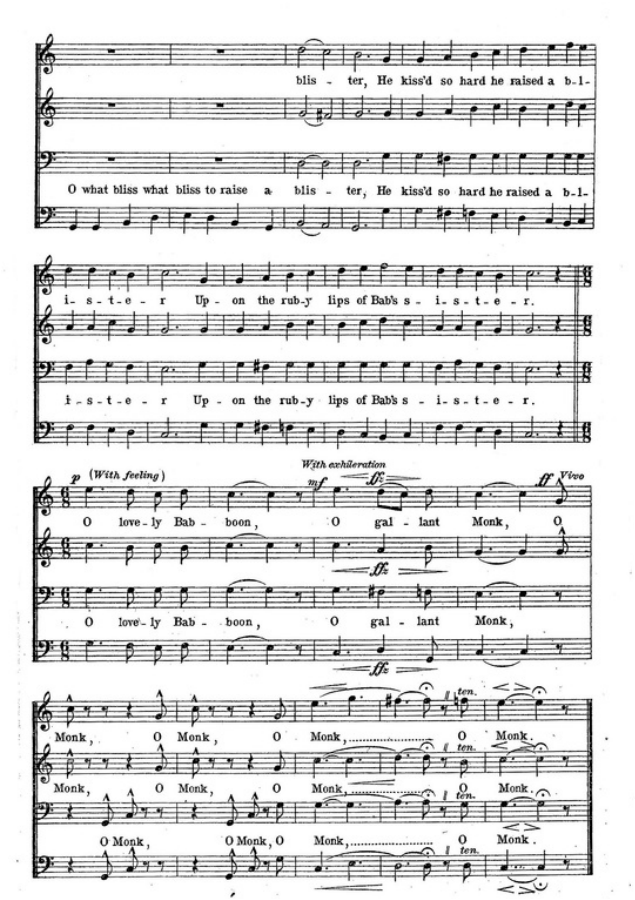 Tenor I soon joins bass to emphasize the ludicrous intensity of the simian kiss. With quick repetitions of the action and the switch from quarter notes to half notes on "sis-ter" in measures 7-8, O'Hare further stresses the silliness inherent in the situation. Making a new comic song out of almost nothing, O'Hare repeatedly exclaims, "O what bliss!" (measures 9, 10, 11-12), sometimes with a slowed tempo on "bliss."

O'Hare further enhances the humor by his use of dynamic and parenthetical performance indicators.  The soft volume of "O lovely Baboon," sung :with feeling," may give credit to the bride's beauty, but it contrasts sharply with the much louder closing "Monk" section, sung "with exhilaration."  Throughout the final seven measures, O'Hare uses rests, accents, dynamics indicators, slurs, ties, and holds to stress the Monk's macho conquest. The result is a ridiculous, almost mock-epic, extolling of the quartet's new hero, now more important than his bride in the earlier folk/minstrel song.
When O'Hare paraphrased The Monkey's Wedding, many older people would have recalled the song from its minstrel days.  With newspapers occasionally reprinting the old lyric during the opening years of the 20th Century, we can guess that it was well known during the years immediately leading up to O'Hare's paraphrase.
Love's Four Seasons (Witmark, 1905) 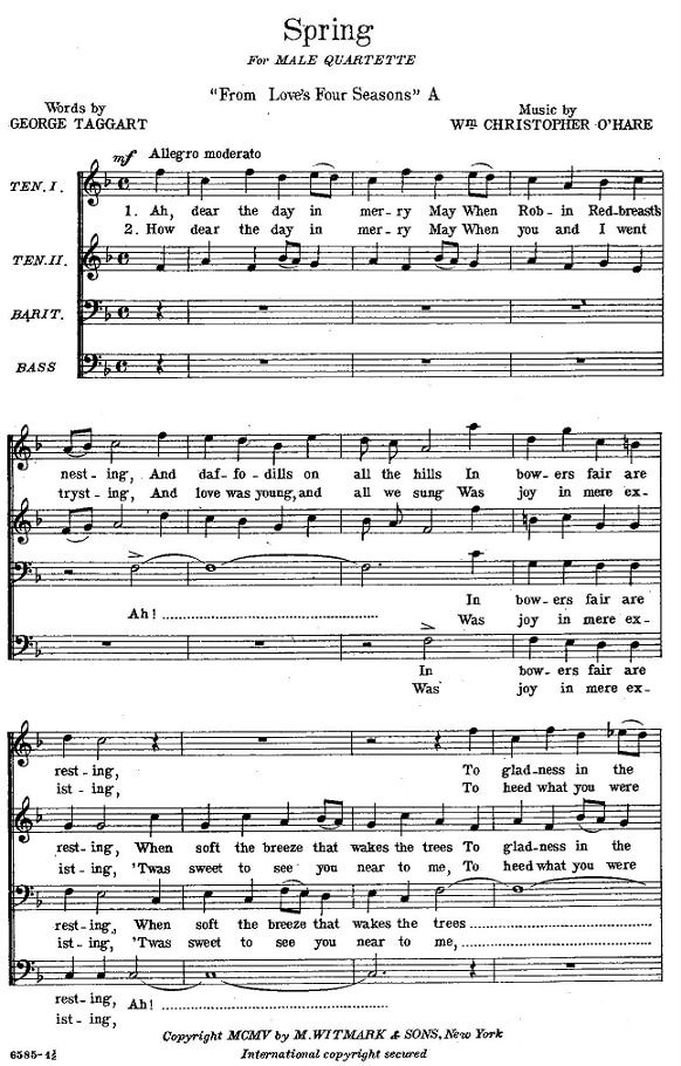 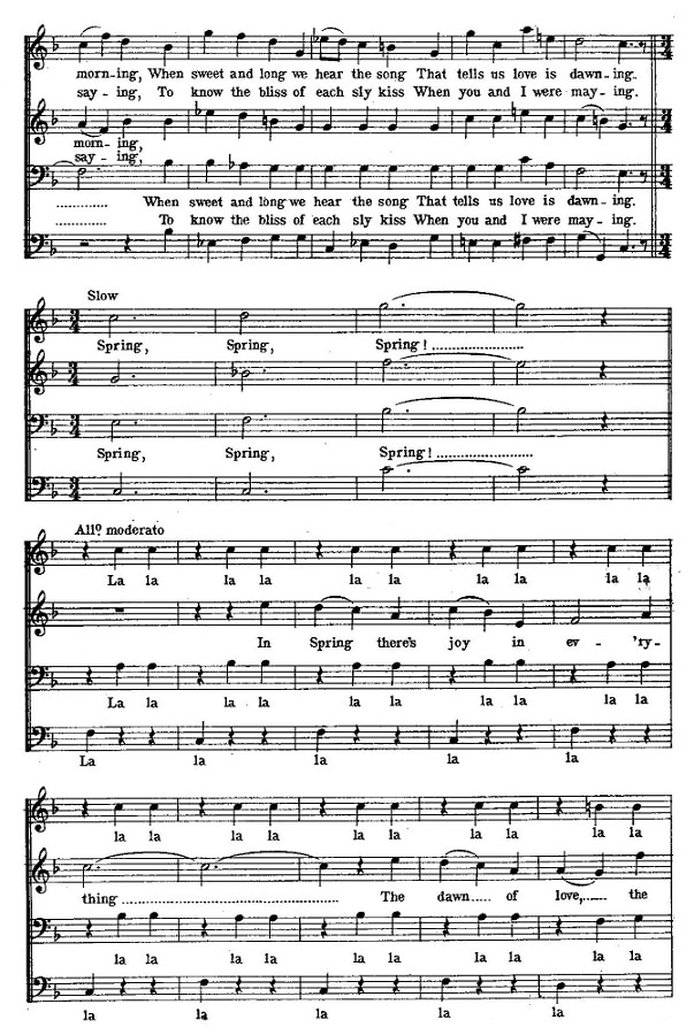 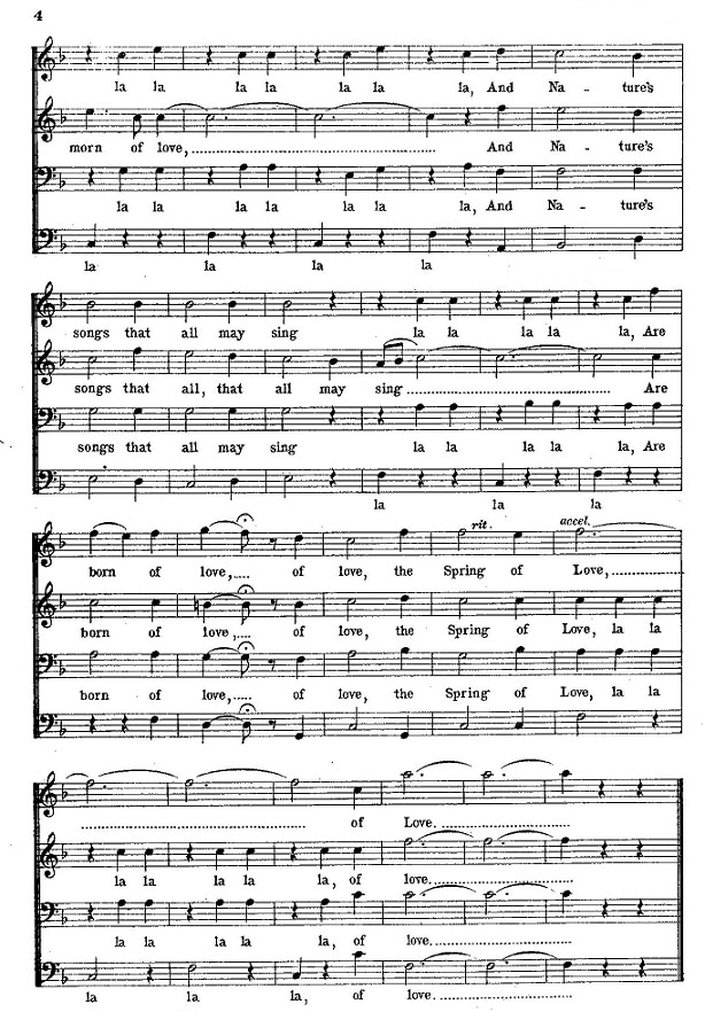 In contrast, O'Hare opens Winter in the lowest voice with others soon introducing laughter as if to say that the song depicts nature's cruel trick on lovers  This laughter stops with the sky's "vault of the grave."  Leading up to the final exclamation, O'Hare indicates that Baritone should dramatize the wild wind's sad song by voicing it in a "quasi chant."  Each time O'Hare ends the chorus, he increases the dynamics, first instructing ff and then fff on the closing exclamation:  "And love is the first to die!" 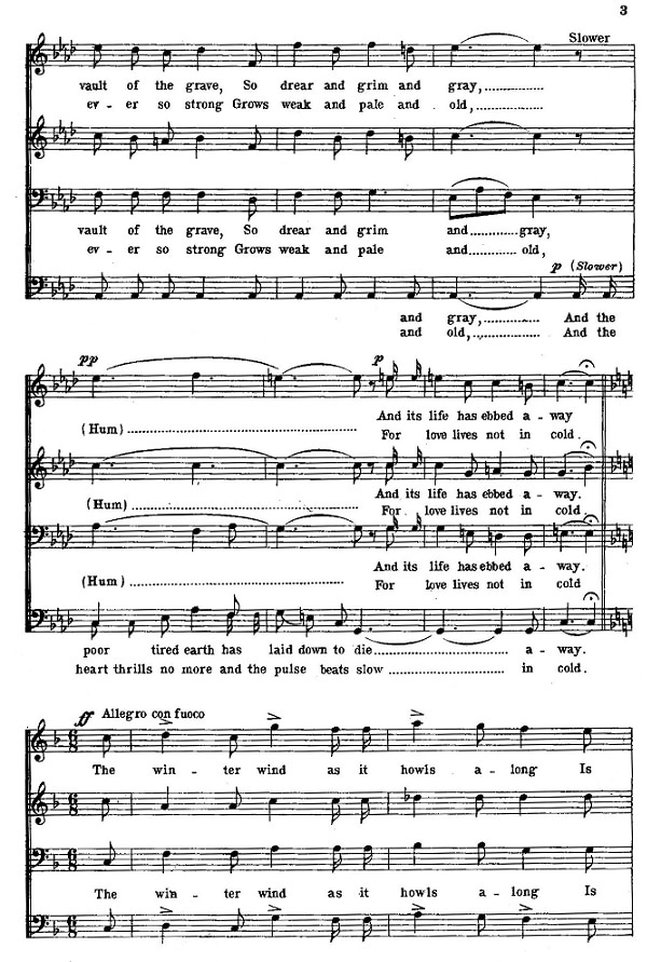 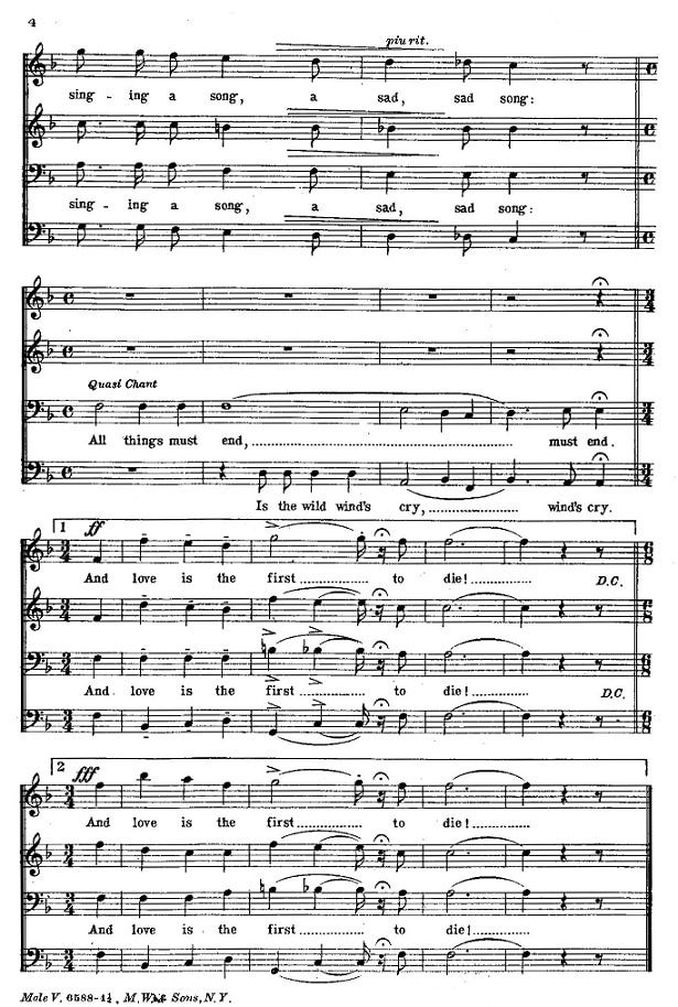 Devere's shout lyric intermingles traditional ideas and phrases from spirituals with modern elements.   Like many spirituals, Don't Shove offers advice for reaching heaven, talking of the goal as a journey.  Verse 1 opens with "O if you're in a hurry for the great las' day, Don't shove, Don't shove!"  According to the shout,  the journey is  made, at least in part, by climbing until one reaches St. Peter, who holds the keys to glory.  One is reminded of spirituals such as We Are Climbing Jacob's Ladder and Climb Up, Ye Little Children.

Yet these traditional religious elements are  interrupted by humorous advice such as "Git ready for the journey and put up a little snack."  Musically, O'Hare assigns segments of both verses to individual voices, having everyone join on "Don't shove."

Devere introduces humor as he adds,  "Jes' think they're kinder sassy an' dey never can be beat. Don't fret or worry, you are bound to get a seat.  " He again might make listeners chuckle a few measures later as Tenor 1 sings,  "You're welcome sinner . . . . . . . . .  An' you're bound to be a winner."   O'Hare enhances the humor of sinner- turned-winner by repetition of "sinner" in the other voices and their "Yes" as Tenor I holds "winner."

In 1913, O'Hare arranged Don't Shove for female voices, presumably indicating vocal groups' continued interest in the song.
A Pair of Vocal Scores Demonstrating O'Hare's Versatility (1914)
In 1914, O'Hare faced what might have been a challenge as a composer and arranger for Witmark's Excellent Quartette Arrangements series.  Darl MacBoyle had composed lyrics for two songs on the same topic--human mortality in an indifferent world.  With the task of composing the music for both lyrics and arranging the songs for male voices, O'Hare may have felt pressured to distinguish them sufficiently from one another--to imbue each with its own sound and character. Perhaps taking his cue from the song titles and the appearance of title words within the lyrics, he overcame the challenge. 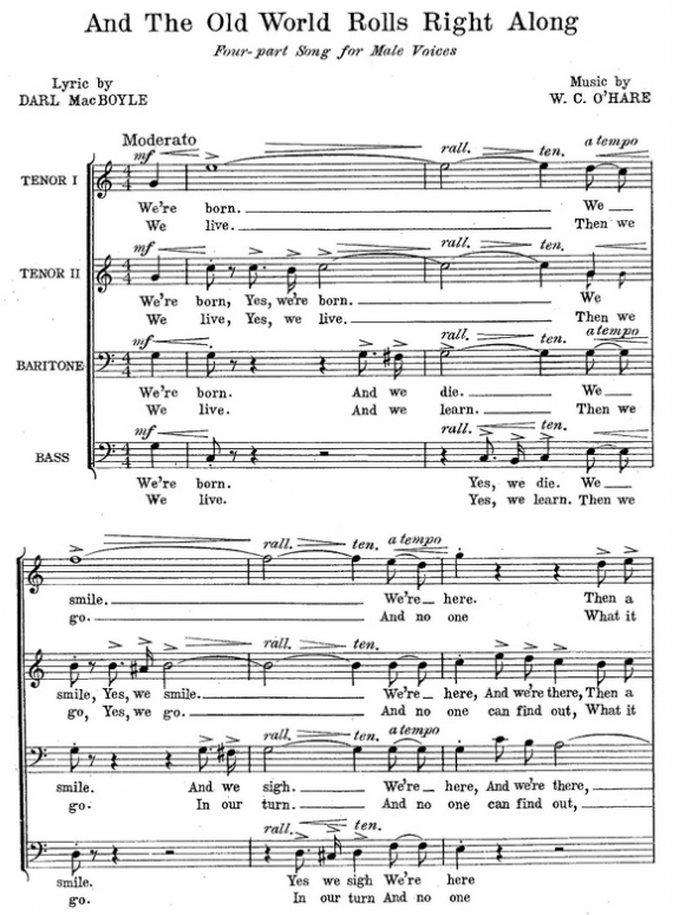 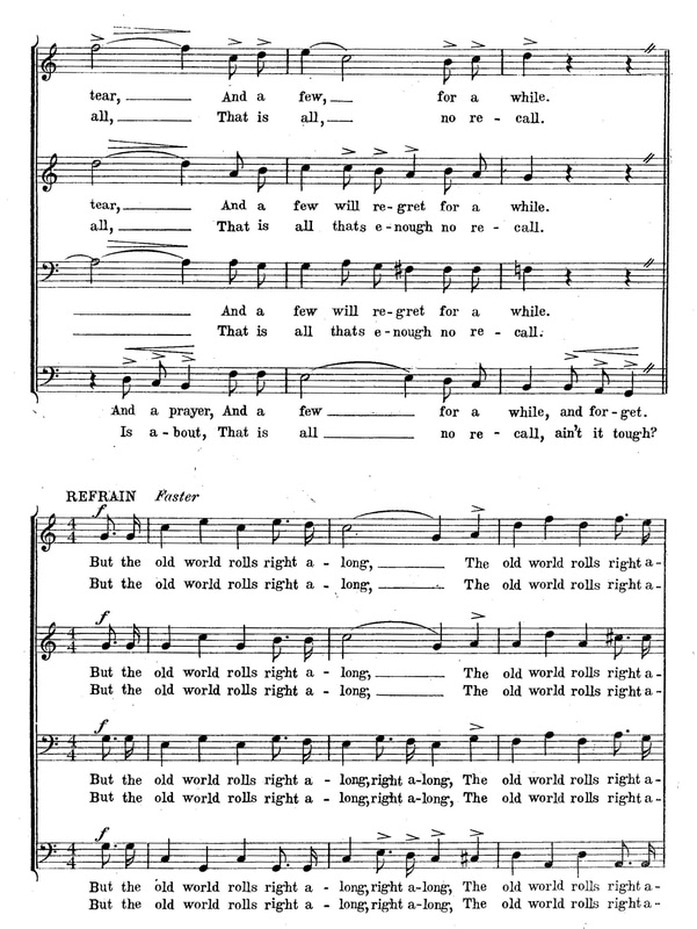 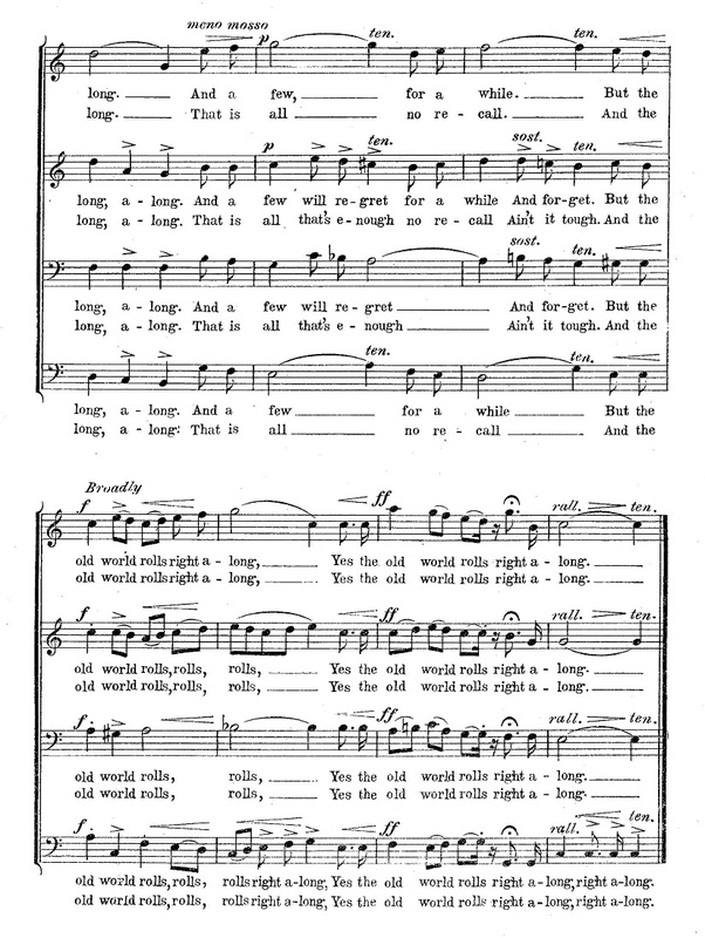 page 3
In And the Old World Rolls Right Along, O’Hare varies traditional call and response structure, something he would have known well from his interest in black music.  Rather than assigning one or two voices to introduce a thought and having others respond, he uses all or most of the voices to introduce the thought, and one or more to repeat, to elaborate, or to offer a contrasting thought.
Throughout the refrain, O’Hare provides performance guides to bring out the song’s bleak message. For example, as the refrain opens, he notes that singers should increase the dynamics and the tempo, thus underscoring the earth’s unceasing motion.  As phrases from the verses are reintroduced in the refrain, he indicates a softening and slowing.  By including other performance guides such as a brief rest before and a fermata on the penultimate "right," O’Hare reminds listeners of the contrast between the earth's ceaseless, indifferent movement and its residents' mortality.  The closing Bass reiteration of “right a-long,” gradually louder and accented, prolongs that emphasis and intensifies that indifference.  It’s impossible to know if MacBoyle wrote out the words for the refrain or if they were O’Hare’s doing when preparing a simple lyric for performance.  Whatever the case, O’Hare, as composer and vocal arranger, dramatically drives home the lyric’s message in the song’s final moments.

A quick glance at the second MacBoyle-O'Hare song in the pair reveals O'Hare's instruction: "One measure to a full second of time."  O'Hare is marking the passing time with the mechanical tick-tock of a clock, gradually counting down the years in a lifetime.

For the first two-thirds of the song, Tenor I, Tenor II, and Baritone simultaneously sing the same words.  The frequent voice changes that characterized And the Old World Rolls Right Along are conspicuously absent.  Less frequent, too, are the many tempo and dynamics indicators found in the song from only two months earlier. 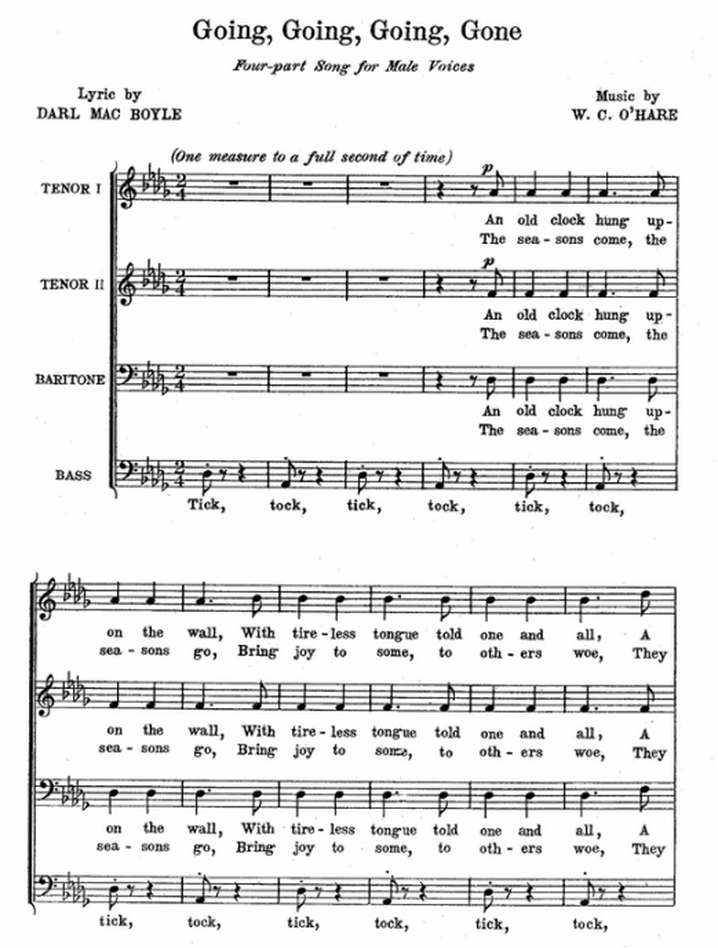 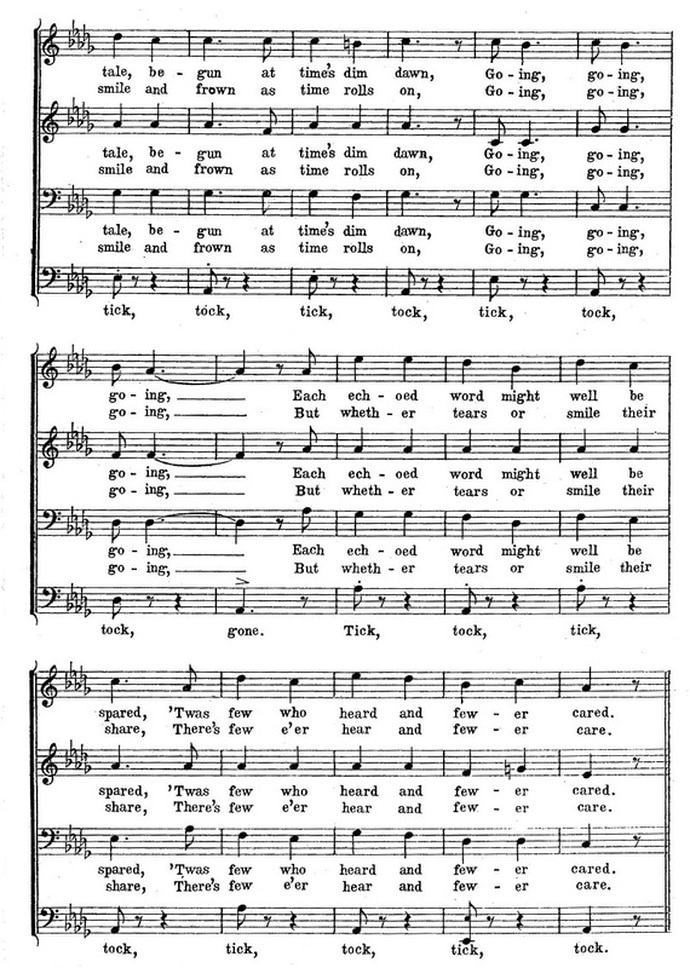 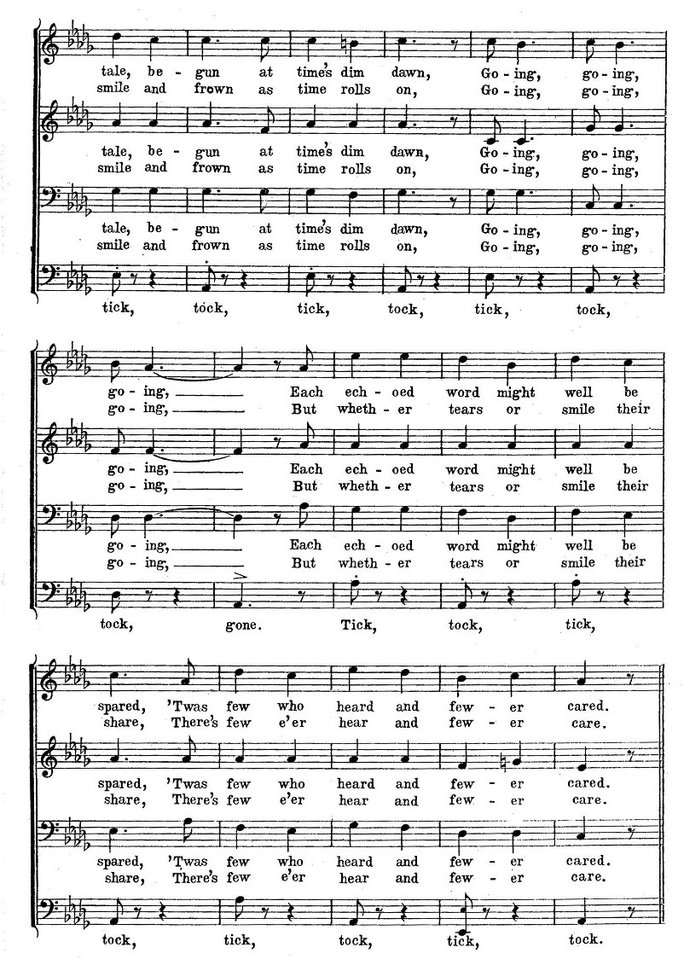 ﻿Staccato eighth notes used for the tick-tocks contrast with the quarter notes and occasional dotted quarter notes most commonly sung by Tenors I and II and Baritone. Only when the other voices sing "go-ing, go-ing, go-ing" does Bass stop marking time and, instead, indicate the end of a life.

On the refrain, O'Hare assigns Baritone a slow, fateful tolling, each "Dong" beginning loudly and gradually diminishing over four measures, mimicking the sound of a church bell.   The last "Dong" fades on the final "gone."  Someone has died, but O'Hare indicates that the tireless clock will continue its mechanized tick-tocks, and the survivors will live on heedless of passing time that will also end their lives.
Background image, top of page:  detail from a Witmark quartet collection cover