The Parlor at Linden Grove

Censuses and city directories reveal that William Christopher O'Hare was not the only talented member of the family. He grew up with artistic aunts and an uncle young enough to be his siblings. Depending on the records checked, Frances was only four to eight  years older that William Christopher; she seems to have grown younger over the years.  Laura Christine was approximately two months older than nephew William Christopher, and John Stanislaus slightly over a year younger.

In 1888, the year 21-year-old W. C. O'Hare left Washington for Shreveport, Louisiana, his aunt Frances appeared in the Washington, D. C. city directory as a music teacher and his aunt Laura as an artist, both presumably working from home.  Their brother John, a clerk and roughly 20, may have been working in his father's former store, now owned by older brother George Albert, W. C. O'Hare's father. 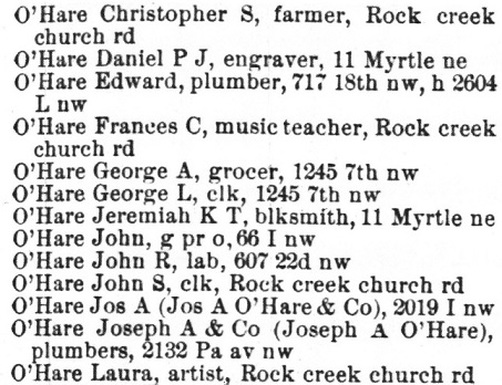 1888 Washington, D.C. directory
John must not have been a business man at heart, for he soon chose his own path as Wm. Christopher O'Hare had done before him. Following John's brief stints as a clerk and as gardener at Linden Grove, the 1892 and 1893 city directories list this youngest child of his generation as a photographer at the National Museum--the Smithsonian. 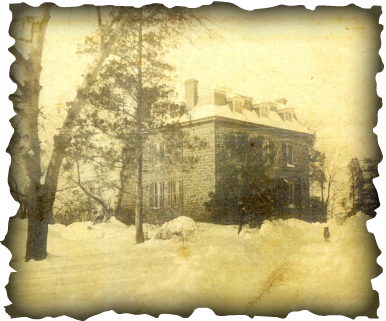 Ann Shreve O'Hare's will specified that the Linden Grove property should be sold when profitable and that the money should be divided among her children.  Roughly twenty years after Wm. Christopher O'Hare left Washington, D. C. for Shreveport, family back home began selling the land surrounding their home and came close to losing their home, itself.

A late January 1908 Evening Star reported, "The Chillum Castle Realty Company purchased the Christopher O'Hare tract, with a few slight reservations, consisting of fifty-four acres.  The former property is bounded on the south by Shepherd road, with frontage of one-half a mile, and on the east by Blair road with a frontage of three-fourths of a mile.  North Capitol street, Oregon, and New Hampshire and Kansas avenues, when extended, will pass directly through this tract, according to the street extension plans."

A straight route was mapped and trees cleared in preparation for the New Hampshire Avenue extension.  No existing homes lay in the path.  Residents in the area surrounding Linden Grove, as well as the surviving O'Hares, considered the extension beneficial and donated land for that purpose.

Then a new angled route was proposed that would have forced some residents, including the O'Hares, to lose their homes.  Residents of the impacted area protested.  Two protest letters appear below.  The first is signed by M. J. Colbert, the O'Hare's lawyer, and by Ann Elizabeth O'Hare, the oldest daughter of the late Christopher S. and Ann E. Shreve O'Hare, aunt of Wm. Christopher O'Hare, and  family matriarch following her mother's death.   The second letter, signed by the president of the at-risk Masonic and Eastern Star Home, also mentions the O'Hare home: 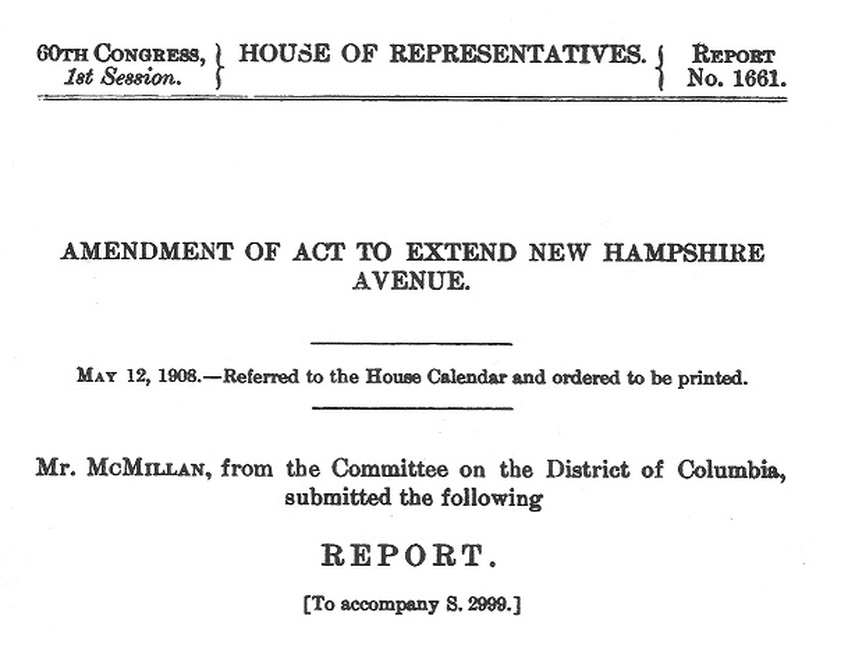 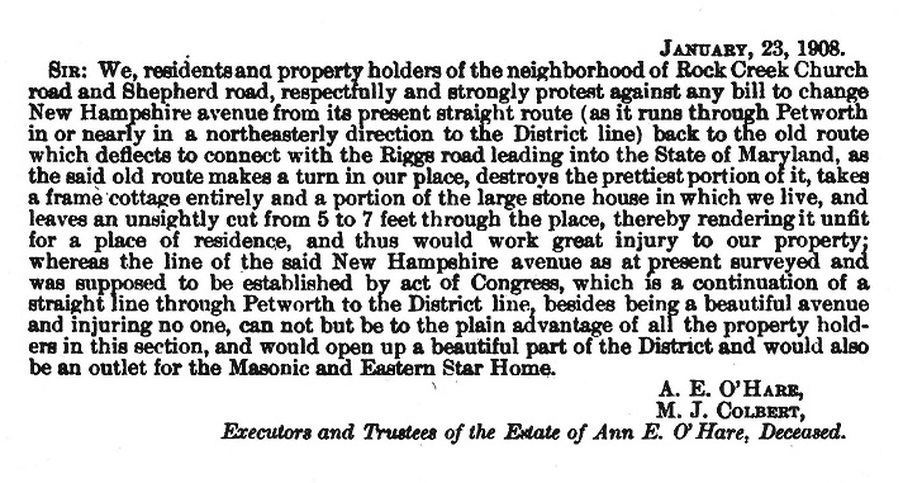 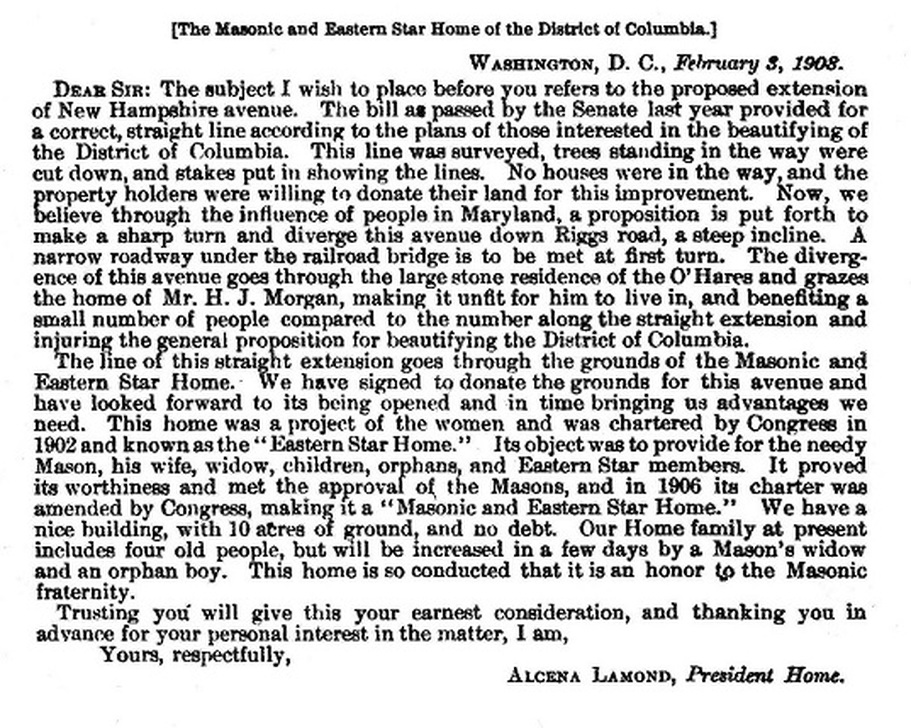 Fortunately for the writers of these letters and several similar letters, the House Committee on the District of Columbia reconsidered the altered route and reverted to the original plan, thus sparing Linden Grove and other homes.
The sale of the O'Hare property, with the exception of the home itself and immediately surrounding land, enabled the family to live comfortably for the remainder of their lives. The farmland they had decided to sell became a desirable Washington, D. C. subdivision as lots were sold and new homes constructed.  Two July 1911 articles provide more information:

Great activity in the improvement of Chillum Castle Heights during the past few weeks was reported yesterday by the Washington Land and Mortgage Company.  Contractors have been working at paving and grading the streets. . . .

The condition of the land is such that but little grading has been found necessary.  The natural rolling surface of the subdivision has caused the owners to decide to have the streets conform to the natural formation of the ground.  Many excellent bungalow sites and advantageous places for residences have been produced. . . .

The tract of land known as Chillum Castle Heights formerly was owned by the O'Hare family. For more than 50 years the family occupied it. All available property surrounding this land has been improved, and had it not been that the members of the O'Hare family were reluctant about destroying the homestead, this property also would have been built up.

Members of the Linden Grove O'Hares remained politically, socially, and musically engaged.  A variety of sources reveal that Christopher S. O'Hare had long ago played an active role in early District of Columbia politics, serving in an elected position on the city council and frequently serving on juries.  Even after selling most of the family property, his daughters Ann and Laura hosted D.A.R. activities at Linden Grove.  As reported in the Washington Herald (1913), one of these events reveals that younger brother John shared at least one instrument with his nephew William Christopher O'Hare--the violin.

"Our Flag Chapter (Washington, D. C.).  The first tree dedicated by the D.A.R. to soldier and sailor relatives who served in the Great War was planted on June 3, 1919, by this Chapter at Linden Grove, the residence of the Misses O'Hare.

"At 5:30 o'clock in the afternoon the Chapter and guests assembled on the grounds of the O'Hare home, an old stone mansion built on the site of Chillum Castle, a Colonial dwelling destroyed by fire.  A young linden tree was placed in position on the edge of the lawn, facing a wide valley.  Miss Laura C. O'Hare, conducting the ceremonies, introduced Mrs. E. L. Pugh, who read a poem she had written for the occasion. . . .

"Mrs John T. Sadler, Historian, read the names of the soldiers and sailors to whom the tree was dedicated.  [Among those listed was Slater O'Hare, younger son of Wm. Christopher O'Hare.  Slater had been, severely wounded in France nearly a year earlier.]

"The tree, which was given by Mr. William C. Lanhan, Superintendent of Trees and Parking, has been registered on the roll of the American Forestry Association by Miss Laura C. O'Hare, Treasurer of the Chapter.  A marker of commemoration designed by the Forestry Association will shortly be placed upon it."  --Daughters of the American Revolution Magazine (December 1919)

Frances "Fannie" O'Hare Ragland, who had continued to live at Linden Grove with her husband and son, died young from food poisoning after eating bad seafood. John, Ann Elizabeth "Lizzie," and Laura passed away in the 1920s, Lizzie and Laura within a few months of each other.
Like the majority of the O'Hares, Fannie, John, Lizzie, and Laura are buried in the O'Hare family plot, Mount Olivet Cemetery.

Property surrounding the O'Hare home had been sold years earlier and turned into a booming subdivision, but several of Christopher and Ann Shreve O'Hare's offspring remained in the family home.  Laura Christine's death only a month before the Linden Grove copyright meant the end of the two generations of O'Hares at Linden Grove.  News of Laura's death,  coming so quickly after Lizzie's, most likely sparked W. C. O'Hare's recollections and prompted him to memorialize both place and lost family in music.  The title and subtitle imply that he retained fond memories of his ancestral home, a peaceful rural retreat within the District of Columbia.

Interested in how the Linden Grove orchestration might reflect that family history, I consulted David Reffkin, violinist and leader of the American Ragtime Ensemble, who offered the following observations:

The piece evokes what the subtitle declares:  " A Summer Idyl."  It is in 6/8 time, a slow two-beat pattern (dotted quarter at 60) in major mode that presents a peaceful, predictable melody with a simple chord pattern.  This first theme is marked "a little lingeringly."  There is a brief interlude that dips into the relative minor with a pleasant chord progression, and slightly less contented feeling where a diminished 7th chord is the only "cloud in the sky."  The trio section offers slightly more complex progressions, but never loses the pastoral quality of the overall piece.  The piece returns to the opening material, resolving to a coda that gradually presents static chords with an ongoing slow-stepping bass line, and ends with a very soft and fading finish.

The slow, peaceful, simple melody might be viewed as O'Hare's effort to recreate an idealized, lazy summer afternoon at his grandparents' home where a boy could wander among the trees and fields, have a drink from the well, or relax in the shade with family.  Perhaps the "slightly less contented" relative minor interlude was intended to introduce a sense of loss, whether of family property, family members, or a bygone time.  The final gradually fading volume could represent the drawing to a close and dying out of an era of family history--the loss of people and place never to live again except through his music.

Whatever O'Hare intended, this pastoral piece was published as part of an Oliver Ditson series intended for school and other amateur orchestras.  The piece may well have embodied private emotions, but by its publication O'Hare would not only have made a bit of money from his effort but also would have done his part to bestow artistic immortality on his lost family members and their beloved home.

Several years ago, an East Coast O'Hare descendant and cousin mentioned a family story about a boxwood hedge from Linden Grove having been dug up and transplanted in Washington, D.C. as part of the Lincoln Memorial's landscaping.

I had a photo of a Linden Grove boxwood hedge and had seen boxwoods at the Lincoln Memorial but didn't know where they had originated. I emailed National Park Service rangers at the memorial, but the ranger who replied was unable to help.