Shortly after the May 1867 birth of his oldest child William Christopher, George Albert was elected president of Immaculate Conception Catholic Church's local branch of the Young Catholic Friends Society.  The church was a short walk from the O'Hare family business.

Around the same time,  George Albert became a partner in the business, renamed C. S. O'Hare and Son.  In 1880, eight years before William Christopher would move away from Washington, D. C., Christopher S. O'Hare, George's father,  retired to Linden Grove to become a gentleman farmer, and the partnership was dissolved.  George became sole proprietor of the O'Hare grocery business.
Little more is known about George Albert O'Hare aside from a small amount of information at the bottom of this page .  Fortunately, a delightful Shreveport newspaper item provides a glimpse of this Irish American's humor.  It appeared in late May 1892, following George's visit to son William Christopher and an intervening flood in the Shreveport area:

We have heard and read of many rich 'Hibernians,' but do not think we ever came across a more highly flavored Celtic bon mot than one which decorated a postal card received by Professor O'Hare yesterday from his father, whom it will be remembered left here for his home in Washington City only a short time since, after an extended visit with his son.  It would appear that the telegrams from this city, asking for the use of the government boats, must have made their way into the Washington newspapers in a very exaggerated form.  At least this is the way the postal card read.

'Is it true, as reported here, that Shreveport has been swept away with all its inhabitants?  And, if so, where are you?'

It is altogether likely that the Professor's business engagements and the extra work entailed on account of his recent concert,* have prevented him from writing as often as usual, and are responsible for this literary gem, which is entirely too good to be lost.

The 1870 census further reveals that missing daughter Eva had married George Albert O'Hare and further documents her Missouri birth.  By 1870, she and George were parents of three-year-old "Willie" (William Christopher), whom they may have named after his maternal grandfather William Brown and paternal grandfather Christopher S. O'Hare. It's possible, too, that he may have shared a name with or been named for Eva's younger brother William C., who would have been approximately six, when William Christopher O'Hare was born.  Young William C. Brown's middle name isn't known.

Following the birth of her oldest son  William Christopher, Eva gave birth to two more sons and four daughters who survived into adulthood.  At least two additional O'Hare children, the youngest and twins, died in infancy.  According to East Coast family members, the twins contracted tuberculosis from a wet nurse.  Although I've found no proof of that family story, I have been able to document one twin's death:

1883 death notice for William Christopher O'Hare's baby sister nicknamed "Hetty," born January 1883
After Eva also contracted TB, the family did what it could to cure her.  She was sent to a sanitarium in San Antonio, Florida--a small, remote Irish-Catholic enclave, part of today's Tampa-St. Petersburg-Clearwater metroplex. On April 27, the Washington Post confirmed her death. On April 18, 1884, at age 34, Eva Brown O'Hare, descendant of a Sicilian musician, had died.  She was buried at an undisclosed location in or near San Antonio, Florida.

In late 1889, five and a half years after Eva's early death, George married widow Mary Summerscales Parkinson in Baltimore.  Son William Christopher returned from Louisiana to attend the wedding. 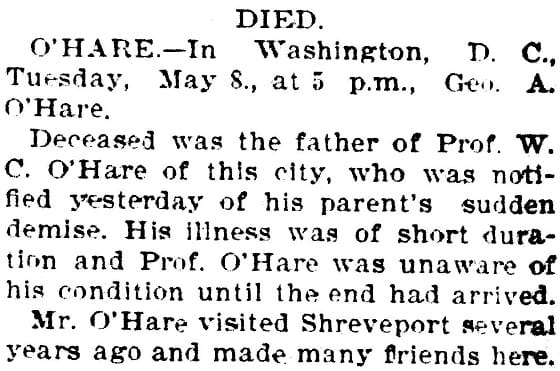 George Albert O'Hare's second wife outlived him by six years, dying in late 1906 of what an investigation labeled an overdose of paregoric, a common opiate of the time, which she was said to have taken regularly for digestive problems.
Background image, top of page:  Washington, D. C. , 1874