O'Hare had begun his Witmark work arranging instrumental and popular song tunes for band and/or orchestra.  However, with experience directing choirs and other vocal performances, it's no surprise that he eventually became a respected vocal arranger. His first published vocal ensemble arrangements began in 1905 with a small number of his own compositions for Witmark.  By 1906. the Witmark catalog included his arrangements of several songs by popular Witmark composers.  (His vocal ensemble compositions can be found by clicking here.)
In The Story of the House of Witmark: from Ragtime to Swingtime (1939), Isidore Witmark and Isaac Goldberg describe Love Me, And the World Is Young as Ball's "first smash hit" and add that it "was translated into almost every principal language."
More Witmark Quartet Series (1907-1911)
Other O'Hare male quartet arrangements collected with Temptation Rag in The Witmark Collection of Quartets for Male Voices, No. 15 include Armstrong and Clark's Shaky Eyes, Gardenier and Brockman's If I Could Gain the World by Wishing I Would Only Wish for You, Brockman's Tie Your Little Bull Outside, and Shields and Ball's Just for a Girl.

O'Hare's collaboration with Frederick H. Martens--poet/lyricist, biographer, translator, music critic--seems to have begun in late 1915 with a lyric by Martens and music by O'Hare.  It continued with Huntzinger and Dilworth and Hinds, Hayden, and Eldredge religious anthems for which O'Hare arranged, rather than composed, the accompaniment for Martens' lyrics.

As shown below, a small number of O'Hare's John Franklin arrangements attracted the attention of and garnered praise from Musical America critic A. Walter Kramer.
Traditional Irish Songs
In early 1917, O'Hare was busily working on an extensive series of traditional Irish songs, arranged for either four-part chorus or quartet.

Review in Musical America:  The first seven arrangements in this series prompted composer and critic A. Walter Kramer (1890-1969) to write a positive, detailed review in his regular column for Musical America:

There is nothing new about arranging traditional Irish songs, either as solos or in choral form.  Herbert Hughes, Sir Charles Villiers Stanford, William Arms Fisher, Arthur Whiting--these are some of the worthy men who have devoted time and thought to the subject. But a good arrangement is always welcome and the arrangements by Christopher O'Hare, just published, fall under this heading.

Irish song is something that Mr. O'Hare holds dear and in giving his attention and ability to these arrangements he has worked con amore.  This is made evident in the results.  Fully fifty-two will be out by next September. . . .

For mixed voices there are The Coolin, The Kerry Dance, Believe Me If All, and The Meeting of Waters.  Mr. O'Hare knows how to write for voices; every one of the arrangements shows it.  And he has given lots of variety to his offering by placing his melody at will in the different parts.  These are not arrangements where one finds the melody always in the soprano.  The melody in The Coolin, for example, is in the bass and in Believe Me it opens in the tenor alone, answered by the other voices on the third measure.  There are distinct skill and appreciation of values shown in all of them, guided by fine musicianship and understanding of the spirit of Irish folk-song.

Nowhere is this understanding better illustrated than in Mr. O'Hare's [comment] on his arrangement of Tho' Dark Be Our Sorrows, where he suggests that if the piece be sung slowly and broadly, it "will take on the solemn grandeur of a true Irish saga."  And one has but to try it to prove that this is so.  This number, The Low-Backed Car and The Minstrel Boy are admirably set for male voices.  In the last named, Mr. O'Hare's harmonization is stunning.  When the text is "the minstrel fell," he sets the melody in B minor (the key of the song is D major) and gets just the necessary sad note for a moment here.

The arrangements have been made (both the male and mixed) for four parts throughout. There is no doubling in any of them, not even for a single note.  Thus Mr. O'Hare exhibits a true gift in arranging his melodies finely with economy of means.  From a practical standpoint this is also important for it renders all the pieces usable by quartets, as well as by choral organizations.   --A. Walter Kramer, Musical America 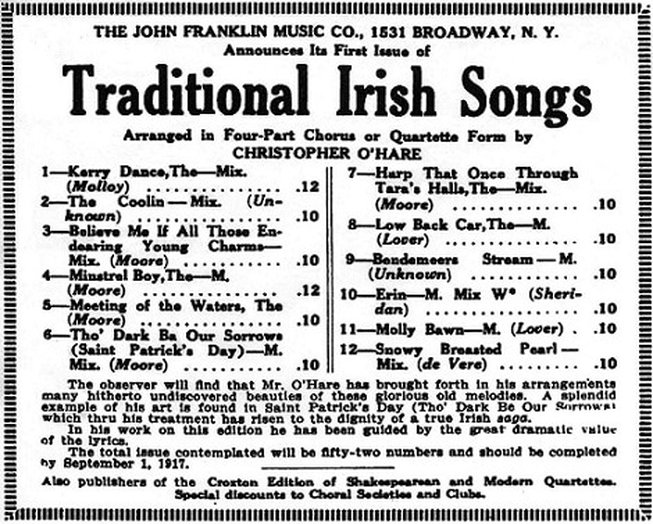 Erin: A Lament, Musical America, and Mme. Schumann-Heink:  As O'Hare's project grew, Musical America focused on a solo arrangement of one tune that O'Hare also included in his four-part quartet/choral series:
In April 1917, The Catholic Choirmaster compared the old tune to a Gregorian chant: 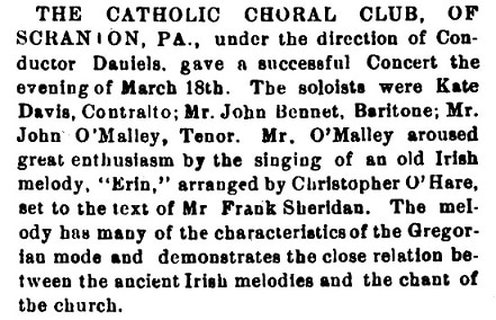 As he remarks, 'The stuff which has been placed before us, fertilized by the war spirit, would make the judicious grieve, did we not know it is but froth which must be blown away.

'In the army formed and now forming are the men whose genius will place the American composer upon the pedestal he has strive for.  From them we will learn heavens and hells of life unknown to us.  And till they come back and, like the minstrel of old, sing us, each, his soul, I fear we will have gained nothing in music from the war.'

Mr. Sheridan has also found that the older songs of patriotism are meeting with the greatest favor, 'perhaps because they are known to all.' As an instance he cites Christopher O'Hare's splendid arrangements of The Battle Hymn of the Republic and The Minstrel Boy*, taken up by the army  glee clubs, 'their glorious melodies treated in a manner to suggest a tremendous body of men in movement, a notable and colorful departure in chorus writing n this well-known arranger's part.'

*The Minstrel Boy is one of Irish poet-songwriter Thomas Moore's songs that O'Hare had included in his recent series of Irish song arrangements and which A.Walter Kramer had singled out for comment. 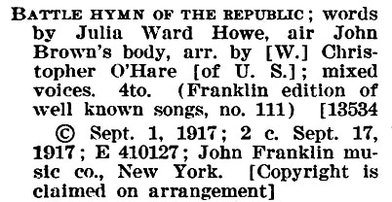 Later John Franklin Arrangements
Although O'Hare continued arranging melodies from composers such as Beethoven, Grieg, Schumann, Dvorak, and Lecocq with modern lyrics for school children, these arrangements also included Ben Jonson's Drink to Me Only with Thine Eyes set to a traditional English tune, and at least two African American songs:

Precisely when Baldwin and O'Hare began collaborating cannot be pinpointed.  However, Lucy Harvie Baldwin's death on February 18, 1923, proves that they had started years before the collection's 1926 publication.  The 1920 U.S. Federal Census shows Mr. and Mrs. George Baldwin living at S. 45 Park Ave., Manhattan, with their Swiss-born butler and a French-born chambermaid. Somehow she and O'Hare connected during her time in New York.

The Baldwins had previously lived in Savannah, Georgia, and their former home is now considered an "architectural treasure."

Following Mrs. Baldwin's death, her husband George Johnson Baldwin--M.I.T. graduate, and wealthy former president of street railways and electric companies in Georgia, Florida, and Texas, civic leader and philanthropist--privately published the folk song collection. He explained her motive behind the collection, the transcription and arrangement process she and O'Hare went through, and the rarity of some songs preserved as a result of their collaboration:

The fact that the children of her family and friends have always loved these songs emboldened the writer to think that perhaps other children might love them too.  So she searched her memory, and sang them to a musician, who wrote down the tunes as she remembered them and then arranged them in their present form.  To the best of the writer's knowledge some of the songs have never been printed, possibly never even been written down before.

In his Foreword to Grandmother's Songs, O'Hare speaks of the challenge a professional musician faces when attempting to preserve folk songs that often do not conform to musical expectations and conventions.

Although a long-time, widely-respected music editor, O'Hare conveys his regard for Mrs. Baldwin's expertise as the person who had learned the songs first hand and for the precious role old songs play in triggering memories. 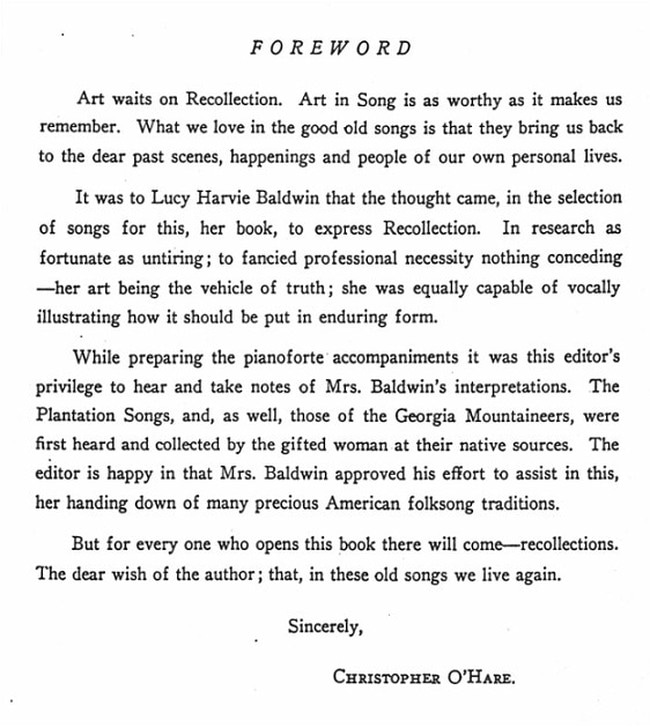 O'Hare's vocal arrangement of Hamblen's anthem exemplifies the adaptability and long life of religious anthems.  With a lyric adapted by Hamblen from Psalm 86 and a musical setting by O'Hare, this piece crossed denominations and at least four and a half decades. 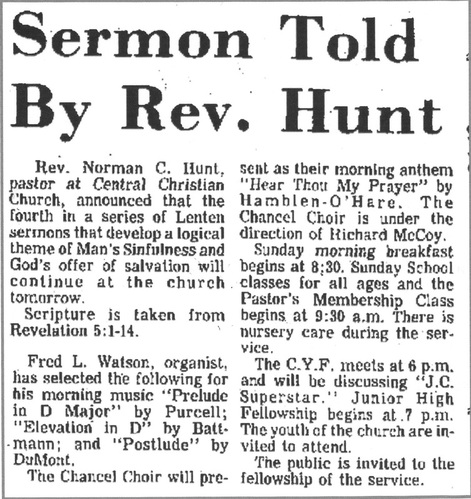 Uniontown, PA, 1974
Late Witmark Arrangements (mid-1920s to early 1930s)
Although much of O'Hare's work for Witmark appears to have ended in the 1910s, he continued some vocal arranging. 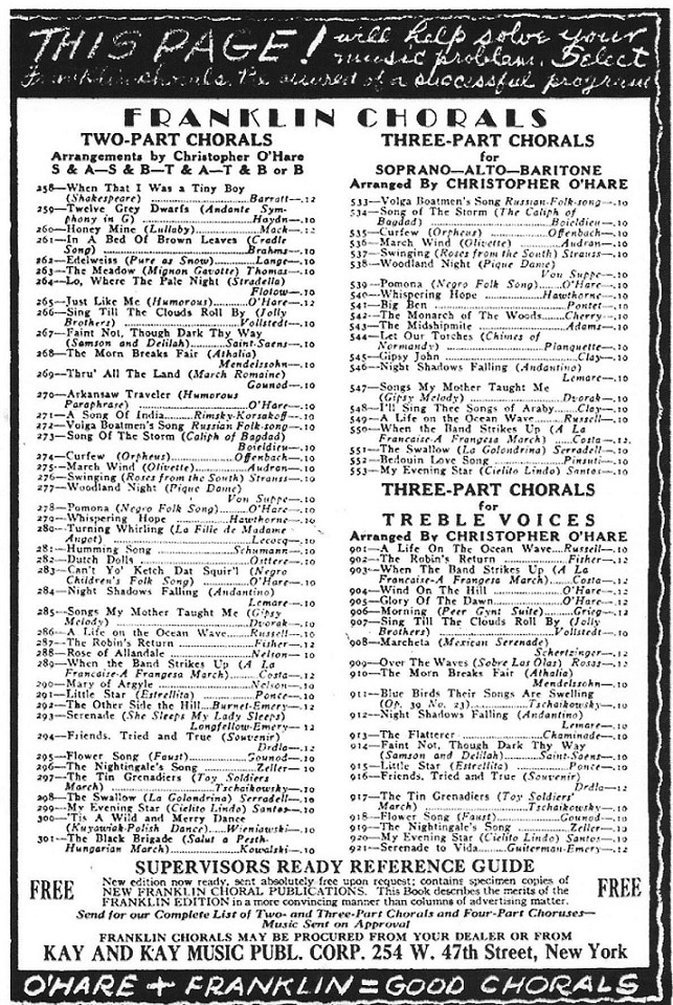 Titles in the advertisement reflected work O'Hare had completed for John Franklin before beginning to arrange for Kay and Kay.    The Kay and Kay choral listing below for educators reveals several later arrangements as do the copyright records:
O'Hare was now in his early seventies.
Background image, top of page:  Detail from one of O'Hare's vocal arrangements published by Witmark