William Christopher O'Hare's departure from Shreveport is shrouded in mystery.  Aside from a Shreveport paper's comment dispelling rumors of his paralysis in New York and announcing his impending return, O'Hare has not been found in Shreveport newspapers after early summer of 1900.   (See Marriage & Sons--Lottie Slater)

Witmark began copyrighting O'Hare's band and orchestra arrangements in 1901. Consequently, I have classified music composed in 1901 and later as part of his New York period whereas music published through early 1900 is included in his Shreveport period.

City directories often reflect residences from the previous year when information was compiled, and he first appears in in the 1902 Trows Directory of Manhattan and the Bronx among a group of people sharing his surname:

Approximately 1901, O'Hare joined the staff at M. Witmark & Sons, Manhattan, New York, as a music editor and occasional composer. By this time, Witmark had established a reputation for publishing Broadway shows and show tunes as well as other popular music, including O'Hare's Levee Revels and Plantation Pastimes.
Shortly after a new Witmark building opened in 1903, articles commented on the company's successes:

That which deserves to survive will survive.  That which by virtue of its complex nature can adapt itself to many and changing conditions stands but slight chance of falling by the wayside.  This is true of the big music publishing firm of the Witmarks, whose growth has been phenomenal and whose prospects are the brightest.

Whatever this firm essays to do, it does; whatever field it enters, it monopolizes, and is determined in every enterprise 'to find a way or make it.'

The house of Witmark has comic opera triumphs, popular song triumphs, instrumental triumphs; to say nothing of the unbounded prosperity of the music library and agency, the most complete and efficient of its kind in existence.

Some modern cynic or doubting Thomas may inquire how it is that so many different branches in the music publishing business can be so successful without the interest of one branch being sacrificed. The answer is found in a combination of strenuous devotion, concerted action, iron energy, capital and well poised judgment. These are the things which make success, and these are the things which the Witmarks possess. . . .

The firm also boasts of a long string of writers without parallel in the annals of the music publishing business. This showing reflects the greatest credit upon a firm which has gained the heights of success.    --New York Telegraph

Perseverance, in spite of hindrances, discouragement and seeming impossibilities is what has brought to the forefront the house of M. Witmark & Sons.  Originally its sole asset was a small printing press.  Now it is one of the leading music publishing houses in the world.

A visit to the new eight story building of the firm on Thirty Seventh street furnished an adequate conception of the vast establishment.

The professional department of the firm, which is the most important branch of any popular music publishing firm, has been given, on the second floor, a suite of apartments and offices probably unsurpassed in comfort and beauty by any business firm in the country.  Besides the "Oak Room," which is devoted to offices for writers and professionals of the sterner sex, there is a woman's reception room, the walls of which are hung with red satin damask, and a row of dainty little piano rooms in each of which will be found an obliging demonstrator.

The third floor of the building is a large and thoroughly equipped advertising department. . . . .       --New York Telegraph

The house of M. Witmark & Sons, the big New York publishers, will have near fifty productions of which they control the publishing rights, on the road and in New York this coming season.  This is a record which has never been approached.    --Raleigh, NC News and Observer

The Role of Music Editor

Still played by bands and orchestras today, O'Hare's work, and that of other arrangers and orchestrators, survives as a legacy often misunderstood by listeners unaware of these craftsmen's challenging and crucial role within the music community. To disprove the common misconception that the latest hit tune '"popped out of some composer's head to a sheet of gayly bound paper, or perhaps to an orchestra" and was picked up by someone who whistled while strolling down the street, New York's Evening Post (1925) described the  indispensable role O'Hare and other music editors played:

Back of every melody is work, days and nights and weeks of it.  And back of it, too, is a great machine--the music industry.  And one of the cogs in the machine is the music editor.  He's not the man who writes the reviews of the opera or concert.  He is the man who catches the tune from the composers, in many cases, and works out those infinite details of arrangement which fit it for publication and for the countless orchestras that will play it eventually.

Christopher O'Hare is a music editor.  He has lubricated thousands of melodies.  He has written some of his own.  He and the fellows of his craft have actually 'made' many composers by their technical knowledge. . . . At times Mr. O'Hare has had to catch a tune as it was whistled or sung by its composer and then work out its harmonies and intricacies.  For many composers can't write music.

This process of working out the composer's melody, harmonizing, and shaping the tune into the standard length with the right rhythmic divisions was no easy chore.  In a 1911 Louisville Courier-Journal article, an unidentified Tin Pan Alley arranger explained what may have been the most challenging part of the job:
The same year in the New York Times, a Tin Pan Alley composer confessed:

I can't write music, nor sing, nor whistle, nor play any instrument, yet I have acquired money and fame as a composer.  I have done it all by verbal statement such as 'tum tidddy iddy or iddy iddy tid!' while drumming with my fingers.  Meanwhile a species of musical stenographer takes it down on the piano and then transcribes it.

One might wonder why publishing firms wasted time with people who couldn't write music or so much as whistle or hum a tune.  The unnamed arranger provided a simple answer:  "Strange to say, these people often have remarkable catchy tunes with great possibilities."  W. C. O'Hare agreed:  "They have a gift for melodies and that is a rare and vital gift."

Such melodies provided the bread and butter of the popular music industry, the tunes people loved to play on their parlor pianos, crank up on their new phonographs, hum or whistle as they went about their daily tasks, or sway to in dance halls as they held their honeys close. 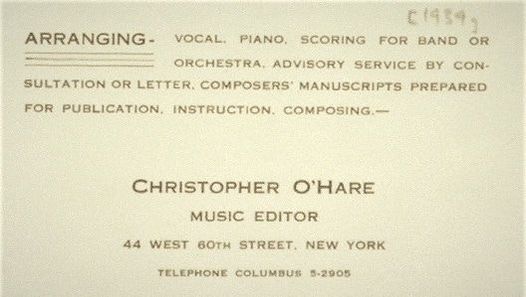 Background image, top of page:  Witmark building at turn of the century