In mid-1890, slightly more than a year and a half after moving to Shreveport, William Christopher O'Hare married Lottie Slater of nearby Marshall,Texas.

1880 U. S. Federal Census, Marshall, TX
With  her father's name and occupation and Lottie's birthplace as Tennessee, it's easy to trace her jeweler father to 1872 Memphis when Lottie would have been roughly 3 years old.

William Slater (24), jeweler, and first wife Mary Jane (21) can be traced to the 1852 Canadian census for Prescott, Ontario, Canada--a small town across the St. Lawrence River from Ogdensburg, New York. At the time of the census, the couple has one son, Sylvester, born in Canada.

This Canadian connection helps explain O'Hare family trips to Canada since family members may have remained there after William and Mary Jane's move to Tennessee.

The probate papers for Mary Jane's estate indicate that William had "absconded" from Memphis, Tennessee, failing to fulfill his duties as executor of his wife's will. Whether or not he went directly to Texas is uncertain, but we have already seen him living in Marshall, TX, with second wife Frances in 1880.
Sometime shortly after the 1880 U. S. Federal Census, William H. Slater and wife Frances died.  The June 9, 1907 Marshall [TX] Messenger lists several people whose deaths were reported between 1877 and 1897, and both William H.and second wife Frances are included in the 1880 list. With Mary Jane's death in 1873 and William's in 1880, Lottie was an orphan at approximately age 11.

How William Christopher and Lottie May Have Met

W. C. O'Hare and Lottie Slater may have met through mutual acquaintances when she made the roughly 40-mile trip to visit Shreveport friends.  A Shreveport paper reported:

Miss Lottie Slater, of Marshall, Tex., is the guest of the Misses Sturtevant.  --February 1890

C. D. Sturtevant sang in a quartet under O'Hare's direction during a Jan. 20, 1889 YMCA benefit concert.  In August,  O'Hare played piano and organ at the Sturtevant home for Mr. and Mrs. Sturtevant's 21st anniversary celebration.  In October, O'Hare again directed C.D. Sturtevant's performance in the lead male singing role in an amateur production of Giroflé-Girofla, and he regularly directed Sturtevant's singing as part of the Holy Trinity Catholic Church choir.

How Lottie knew the Sturtevant daughters isn't known, but Lottie was 20 in February 1890 when she visited the Sturtevants, their daughters Evangeline and Louella nearly 19 and 17. 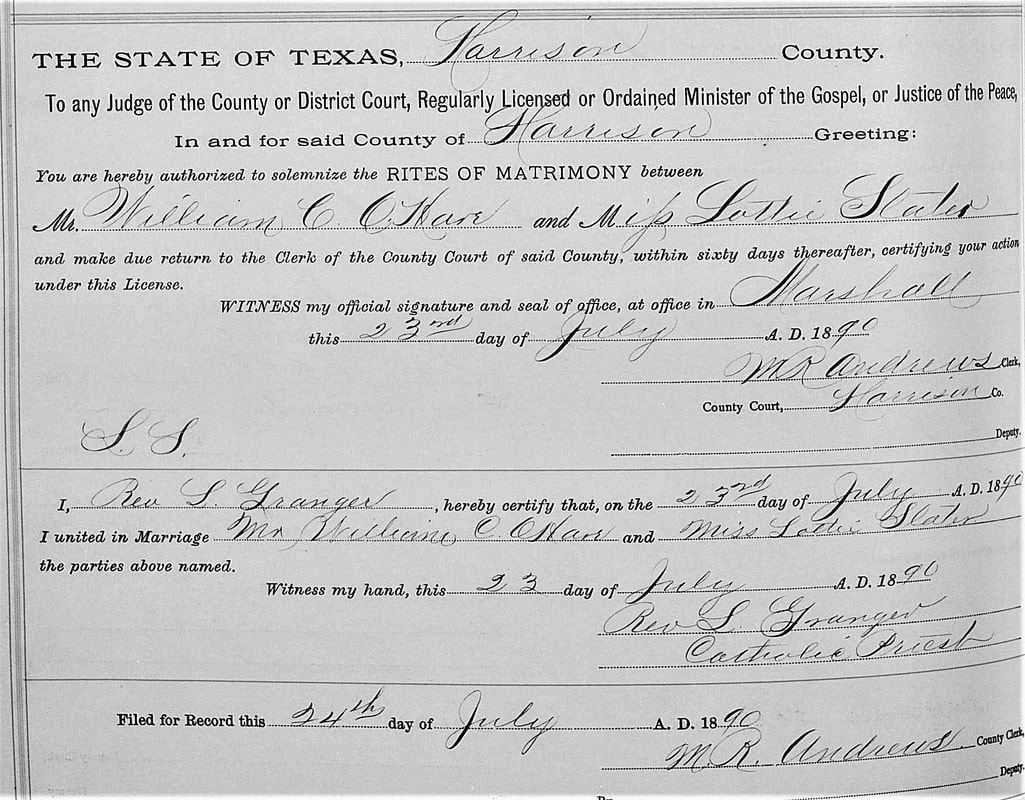 Prof. W. C. O'Hare of this city, and Miss Lottie Slater, of Marshall, were married on last Wednesday evening at the Catholic church at Marshall, by Rev. Father Granger.

On account of a death which recently occurred at the home of Miss Slater's relatives, it was decided that there would be no cards and that the wedding should be a very quiet one, but friends of the bride and groom interfered and after the ceremony, gave them a beautiful reception at the Capitol hotel before their departure for Shreveport.  Prof. H. E. Carter and wife with others made the occasion one of general happiness. The former gentlemen presented Prof. O'Hare with a handsome gold headed cane and another to Dr. E. G. Allen, who was best man.  Mr. Dan Copeland sent in a fine silver tea set for the bride and numerous other gifts were bestowed.

A table of refreshments and wine were spread, and good feeling and toasts to the health and happiness of the newly married pair were drank in sparkling champagne.  Professor and his bride are boarding at Mr. Sturtevant's on Travis street, where they have been receiving their friends the past week.

The bride is said to be a beautiful, accomplished, and charming woman, and we can truthfully say that we believe she has a good husband.  Professor has made a host of friends, and especially in the churches where he has presided at the organ.  He is patient and kind, and deserves a good wife. It is an occasion for the expression of heartfelt congratulations, which are freely given by interested friends.

Family Travels and Issues
In June 1898, Lottie and the boys traveled to Canada, perhaps to visit Canadian relatives. Certainly the weather would have been nicer there that time of year than in Shreveport. Furthermore, at ages 7 and 4, this may have been the earliest opportunity for the boys to meet the Canadian side of  their family.

Lottie and the boys may have spent the full summer away from Shreveport.  An August 26 item in the Ogdensburg [NY] News reported that the three of them were visiting Miss Anna M. McCabe on Patterson Street. W. C. O'Hare would have been in New York City at the time meeting with the Witmarks and promoting Levee Revels.

On September 25, approximately three weeks after W. C. O'Hare had returned to Shreveport, the Shreveport Times announced his family's return:

In 1899, Lottie had begun spending even longer periods away from Shreveport.  In March, she returned from visiting her sister in Texas only to leave almost immediately for Memphis.

Given the number of Slaters living in Memphis at the time, some of whom bore the same names as Lottie's siblings and most of whom lived  together, we can guess that she was again visiting siblings or other close relatives.

It's uncertain whether she returned from Memphis or went directly to New York, further extending her absence from Shreveport.  In mid-July, the Shreveport Times printed the following announcement:

The announcement doesn't clarify if Lottie was in New York City or New York state.  Quite likely, she was again visiting Ogdensburg where she and the boys had also stayed during part of the past summer.  With Ogdensburg just across the St. Lawrence River from the Slater family's earlier home in Prescott, Ontario, we can guess that some of her family lived in Ogdensburg.   A look at census records reveals a sizeable group of Slaters in Ogdensburg as well as Copelands, the family into which Lottie's sister Kate married. According to his obituary, Dan Copeland, Kate's brother-in-law had been born in Ogdensburg., so both the Slater and Copeland families had ties to the area.

At the end of August, 1899, W. C. O'Hare returned to his Shreveport music duties after several weeks' absence, bringing with him news of Lottie's gradual recovery:

Whether O'Hare visited M. Witmark & Sons again during his weeks away isn't known.

On October 12, the Shreveport Times reported the return of Lottie and the boys, mentioning only that they had spent their "summer in the north."

Almost immediately after Lottie's October 1899 return to Shreveport, Marshall, Texas reported her arrival.  It supplied no further details but listed her as from Washington, D.C. rather than Shreveport:

Perhaps she had spent time with the O'Hare family following her illness and before making the long trip back west.  Even so, the announcement should have read "Mrs. W. C. O'Hare of Shreveport."

After several months in New York and another quick departure, Lottie may have still needed her older sister's help in Marshall, either for herself or for the young O'Hare boys. Her return to Shreveport from Marshall hasn't been pinpointed.

At the beginning of June 1900, the Shreveport Times announced that W. C. O'Hare was leaving that day "for the north" and would return to teach his classes and perform his "other musical work about July 5."  No mention was made of Lottie and the boys. However, a month and a half later, on July 15, a New Orleans paper reported that the W. C. O'Hare family was in New York, again not specifying whether this was state or city.

Another two and a half months passed without mention of the O'Hares.  Then at the end of September 1900, the Shreveport Times carried a mysterious report from which we can infer that O'Hare had not returned in early July to teach his  summer classes:

Despite this announcement of his impending return, I have not located any subsequent Shreveport articles about O'Hare. If he returned to Shreveport, that return cannot yet be documented.

Separation, Lottie's Moves, and Her Death

At some point after moving to New York New York City, the O'Hares separated.
The 1915 New York State Census indicates that Lottie, sons William and Slater (lithographers, 24 and 21), and Slater's wife Pauline (21) were living together.  William Christopher was not with them.

Lottie most likely relocated to Des Moines, Iowa, approximately 1916 with both sons.  Years later, one of William Crockett's brothers-in-law talked about helping Lottie move. Speaking of having her on one arm and her ornate fringed lamp in the other, he joked that he couldn't distinguish one from the other.

By late 1921 or early 1922, Lottie was photographed with her grandsons, probably somewhere in Iowa since her sons and their families were moving around that state for entertainment industry jobs during the '20s.
By 1930, Lottie had moved to San Antonio, Texas, possibly when son Slater and his family did in approximately 1926. She would stay in San Antonio until her death, with Slater eventually moving back to Iowa and then to California and William Crockett eventually settling in San Antonio.

Lottie Slater O'Hare died on May 24, 1944, at San Antonio State Hospital, a mental hospital, of bronchial pneumonia with a contributing cause of senility.  She had spent her last two years and three days institutionalized.

According to the Texas State Historical Society, "By 1940 the [hospital] population was 2,854, and the hospital was crowded to capacity.  Patients had to be refused admission for lack of bed space, and a waiting list of over 700 occupied the jails of the state.  The onset of World War II blocked a construction program, but the Board of Control was able to get all patients hospitalized by June 1943. The average daily population of the hospital in 1945 was 2,732; employees numbered 450."
--William R. Geise and James W. Markham, "SAN ANTONIO STATE HOSPITAL," Handbook of Texas Online

Although they had lived half a continent apart for many years, Catholics William Christopher and Lottie O'Hare never divorced.

Lottie's death certificate below is a revised certificate correcting some errors in the original: 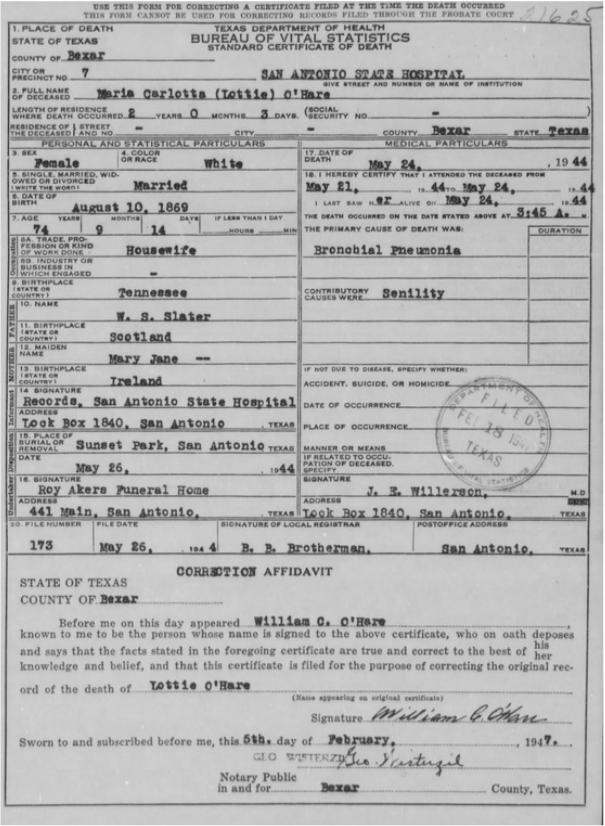 The revised certificate changes the deceased's name from "Lottie O'Hare" to "Maria Carlotta (Lottie) O'Hare" and marital status from "Widowed" to "Married." 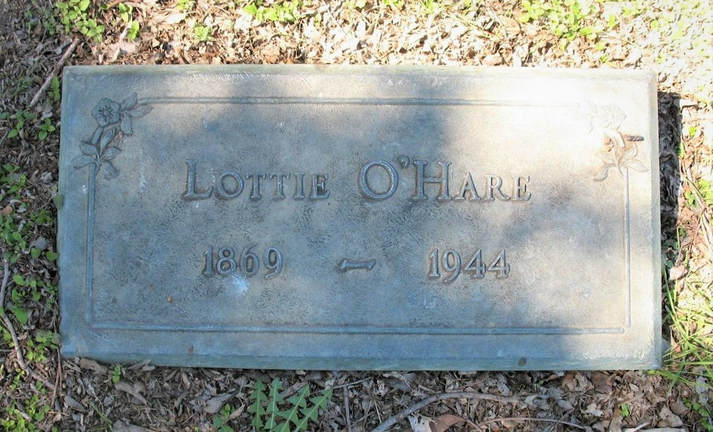 Information Revealed by Lottie's Mother's Will

Mary Jane's January 1873 will refers to her youngest child, then 3, simply as "Carlotta."