Shreveport Composer:
Levee Revels and After

The subtitle "An Afro-American Cane Hop" avoids common terms of the day such as "Coon" and "Coontown," instead using "Afro-American."  Further, the designation as a "Cane Hop" poses a question for future research.  What was this forgotten dance form?

We know from sheet music covers and other illustrations that canes frequently played a role in cakewalks.
Mark Twain also described cane-carrying cakewalkers:

One at a time the contestants enter, clothed regardless of expense in what each considers the perfection of style and taste. . . . All that the competitor knows of fine airs and graces he throws into his carriage. . . . He may use all the helps he can devise, watch-chain to twirl with his fingers, cane to do graceful things with, snowy handkerchief to flourish and get artful effects out of . . .  --from Twain's essay "In Defense of Harriet Shelley"

Although Levee Revels is considered a cakewalk, O'Hare's orchestra and band scores hint that cane hop dancers probably used canes for a rhythmic effect, not merely for graceful gestures.  As ragtime orchestra leader David Reffkin pointed out via email, the orchestra score instructs the drummer to play on the drum's hoop rather than head.  The band score more clearly connects the drummer's action to Levee Revels' subtitle when O'Hare instructs, "Cane hop effect on hoop" and provides a cane hop drum solo. 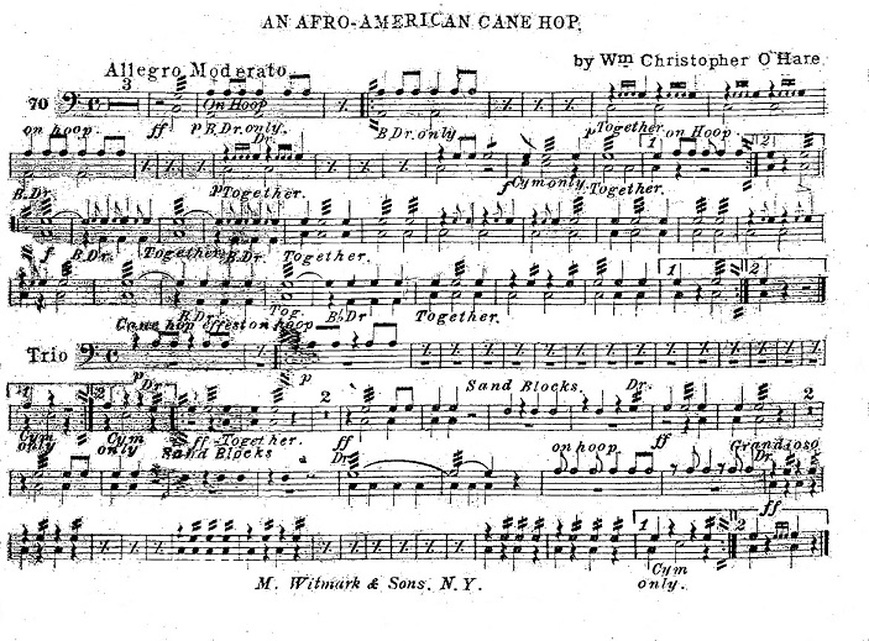 We can infer from the "Cane hop effect" instructions  that O'Hare's contemporary musicians may have been familiar with cane hops.
Nearly three weeks later, a second article announced impending performances of Levee Revels by major bands, including Sousa's.

Prof. William Christopher O'Hare of this city is at present in New York City and is creating quite a sensation in the musical circles of the great metropolis by his beautiful productions. . . .

John Philip Sousa and his band will introduce his new Afro-American Dance Levee Revels, at the St. Louis exposition in September.  Six or seven other prominent bands in New York will bring the same to notice this month. . .  O'Hare's friends are very proud of his success.

Following the O'Hares' return in early September, the Times further commented on effects of the New York trip:

Prof. W. C. O'Hare has returned from the East and looks much improved after his rest of a few weeks.

Prof. W. C. O'Hare has returned from a very enjoyable trip to New York where he received an ovation from some of the most celebrated composers. The Professor has also been part of his time with his family at Toronto.

When O'Hare left Shreveport for New York City on August 1, 1898, to help Witmark promote his music, the piano arrangement best known today hadn't been copyrighted. Furthermore, the fact that O'Hare sent the Shreveport social columnist copies of only his recently published Heliobas and The Awakening of Venus seems to indicate that Levee Revels hadn't been printed.
The Library of Congress recorded O'Hare's Levee Revels orchestra arrangement on January 19, 1899, and his band arrangement on May 30, 1899.  However,  at least some of the promised band and orchestra performances began shortly after O'Hare's late August 1898 return to Shreveport.

John Philip Sousa's band and Victor Herbert's orchestra would have given Levee Revels a boost when they performed it in early fall 1898.

Sousa's Band was engaged for the duration of the 1898 St. Louis Exposition where the Shreveport Times had announced he would introduce Levee Revels.  Likewise, Victor Herbert performed O'Hare's new cakewalk at a Pittsburgh, Pennsylvania exposition.

Shortly before John Philip Sousa's arrival in Shreveport with his band as part of his 14th tour, W. C. O'Hare shared a letter with the Shreveport Times.  The approaching band concert at the Grand Opera House would surely prove a memorable event for O'Hare and the town that now claimed him as its own: 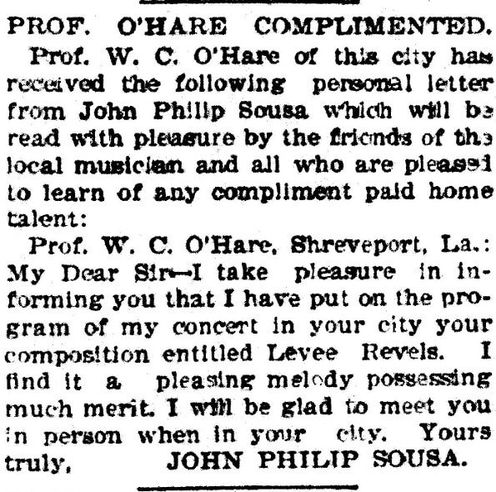 Never has the music loving public of this city enjoyed a more delightful evening than was afforded by the playing of that famous organization, Sousa's Band.  Although the city wore bridal robes and snow-capped thoroughfares, and the weather was fierce and unpleasant, yet it never one time affected the number of the patrons at the Grand, which was composed of the aged and the young and society's swell set in fancy dress costume, forming a most beautiful picture of the audience.  It has been truly said that 'Sousa as a band conductor is what Paganini was to the violin, Booth to the legitimate drama.' . . .

Prof. W. C. O'Hare's composition Levee Revels was rendered to perfection, bringing out all the leading points of the production.  It was received with hearty applause, and there were glances in every direction for the professor, but he was too modest to appear.  It was afterward learned that he was in a dark corner of the gallery, no doubt smiling over his own success, which made him miss the smiles and salutes of appreciation intended for him, to say nothing of the bouquets.  Levee Revels is full of sweet melody and one can almost see the plantation darkey in the clog dance.  The rendition of the piece by this band has made it one of the most popular airs throughout the United States.  Professor's friends congratulate him.

For an idea of the positive impact Sousa's Band might have on a composer's reputation, one need only understand Sousa's omnipresence.  As the Shreveport Times put it before the concert, "It is Sousa in the band, Sousa in the orchestra, Sousa in the phonograph, Sousa in the hand organ, Sousa in the music box, Sousa everywhere.  The American composer is the man; not of the day or of the hour, but of the time." 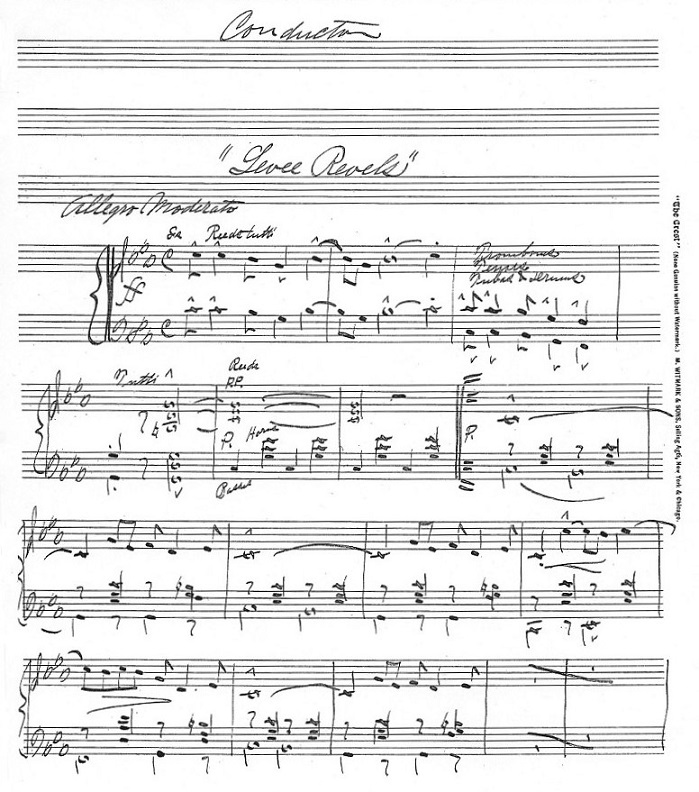 Excerpt from article on "pop" concert by Cleveland Ladies' Orchestra, 1904. Of interest is the comment about O'Hare's use of "negro melodies." Did someone recognize the folk melodies O'Hare is theorized to have used?

O'Hare's best known rag continues to be played and recorded more than a century after Sousa's band and Victor Herbert's orchestra played it.

Witmark's Complete Catalogue of Music, published in 1899 with an addendum covering the most recent pieces published after the main compilation but before catalogue publication, lists an O'Hare instrumental piece I haven't seen elsewhere:  Maid of Monterey Waltzes.

O'Hare's Maid of Monterey Waltzes was most likely inspired by the 1846 Battle of Monterrey and/or by H. L Hewitt's sentimental ballad.   With a lyric recounting the story of a Mexican woman's selfless care of wounded soldiers on both sides of the Mexican War' battle, Hewlett's  catchy ballad was published in Baltimore, not far from O'Hare's Washington, D. C. birthplace.

Click here for Hewitt's sheet music at the Library of Congress.
Click here for a recording of Hewitt's The Maid of Monterey.
Until I locate O'Hare's Maid of Monterey Waltzes, I can't know if it is an original O'Hare composition or a waltz arrangement of Hewitt's tune, perhaps combined with others composed about the battle. Meanwhile, we can draw no conclusions based on the two men's spelling of the city we now call Monterrey.  A May 2017 comparison of hits on newspapers.com's historic Texas papers yielded nearly 1600 hits for the Hewitt and O'Hare spelling and only 17 for today's spelling. 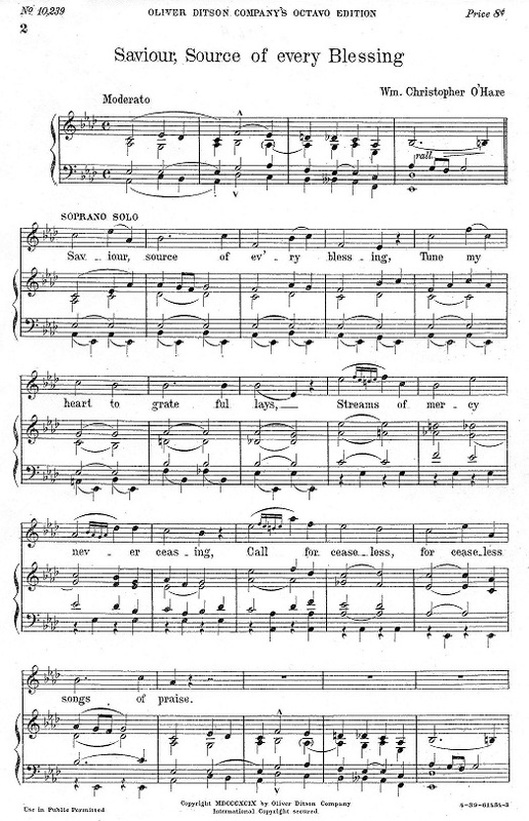 A new composition of Prof. O'Hare, of this city, and entitled The Coming of Rex, will be a number on the musical program of our carnival.  The Professor is to be congratulated; this is a new leaf in among his laurels.

The Coming of  Rex is an unpublished composition of Prof. O'Hare's that won, in competition, for the leading place on the score for the  Little Rock carnival.  Shreveport should be proud of her composer.

William C. O'Hare, a prominent musician of Shreveport, La., recently sent to the Little Rock band a splendid piece of original march music, the Arrival of Rex, which will be played on the occasion of the king's appearance on the day of carnival.  It is pronounced very fine by all who have heard it.  Mr. O'Hare is well known composer of music for bands, and the possession of a manuscript piece of his is considered a notable honor. 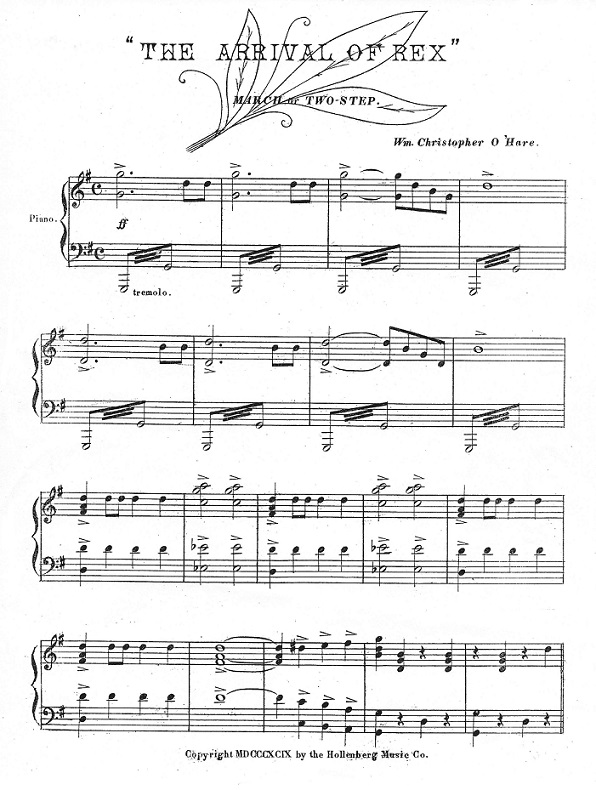 Cap and Bells' publication year is difficult to pinpoint.  The date printed on my copy is 1900.  However, the listing below for Cap and Bells appears in the main instrumental section of Witmark's 1899 Complete Catalogue of Music.  The piece's inclusion in the main section, not in the Addendum added late in the catalogue preparation and covering publications up to August 1899, would seem to indicate that the piece had been published by early 1899.  The copyright was not registered until early 1900.
If Cap and Bells was published around the same time as The Arrival or Rex as the Witmark catalog seems to indicate, it could have been an alternate Mardi Gras selection.  It might also have served a similar purpose at a different venue, such as Shreveport's April 1899 street carnival.  Given a local paper's description of the April event, the title and lively music would have suited the revelry, just as it would have suited Mardi Gras:

Grotesque figures, masked faces, and faces that needed masks showed here and there in the lively, tumultuous through. Some looked at you silently and curiously as though they had come from a strange world to this one stranger still.  Others whistled at you or uttered inarticulate sounds as they ambled down the streets singly or in groups. Many of them reminded the reporter of the Darwinian theory, and he wondered how glad their cousins of the jungle would have been to see them. 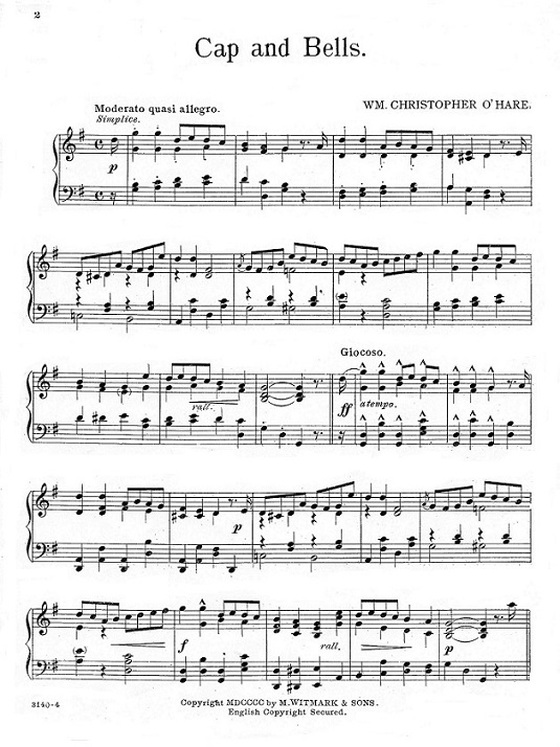 Copyrighted February 9, 1900, O'Hare's  When a Tender Maid is an early example of his musical settings for which he became well-respected during his New York years. The lyric comes from Act II, scene 2 of Richard Brinsley Sheridan's 18th-century libretto for The Duenna, a comic opera. 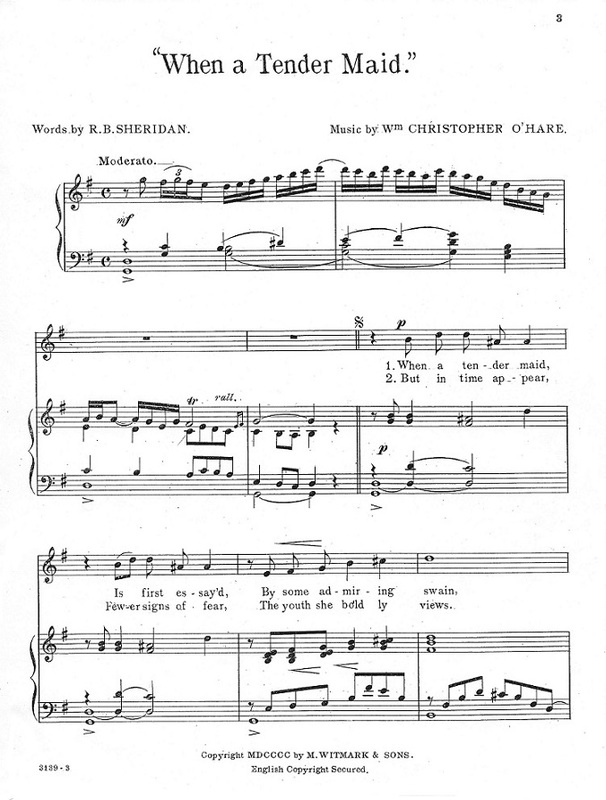