Cottonfield Capers is reminiscent of Levee Revels and Plantation Pastimes.   As musicologist Ed Berlin pointed out during the early drafting of my Ragtime Ephemeralist article (2002 issue), O'Hare again uses irregular strains, perhaps because he is preserving a folk melody.  Cottonfield Capers opens in minor mode with a 13-measure A strain and shifts to major within the first two four-measure phrases.  Instead of continuing with the expected third and fourth four-measure phrases, O'Hare ends the strain with a five-measure codetta, which continues and emphasizes the shift from D minor to F major.  Strain A is the most folksy of the four strains and includes the tune's ragtime syncopation--the so-called "cakewalk rhythm" typically found in such pieces as Kerry Mills' At a Georgia Campmeeting.

Witmark advertisement, Music Trade Review, 1902
The Cottonfield Capers sheet music includes an inconsistency between the cover and the first music page with the subtitle varying between ""A Carolina Frolic" and "A Kentucky Coon-Hop."
Listen to Cottonfield Capers and download a transcription from Bill's Audio Reference Library
O'Hare's manuscript arrangement for Sousa, autographed on every page, has been preserved in the John Philip Sousa Archive, University of Illinois, Urbana-Champaign 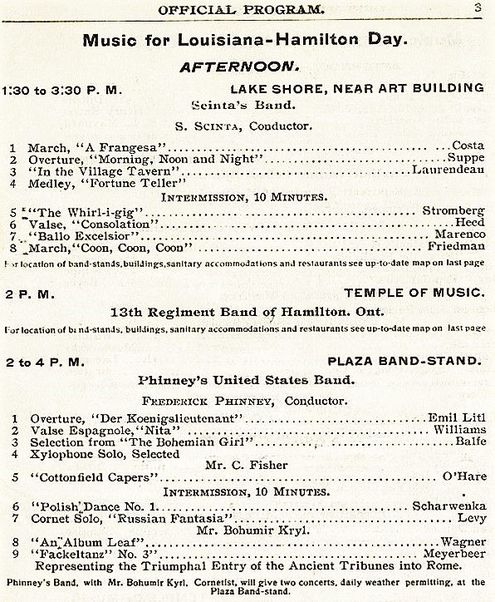 O'Hare's Cottonfield Capers performed during Louisiana Day, Pan-American Exposition, Buffalo, New York, Aug. 21, 1901; source: Pan-American Exposition of 1901, University at Buffalo Libraries.  A picture of Phinney's United States Band can be found by clicking on the preceding website name and scrolling down the page. 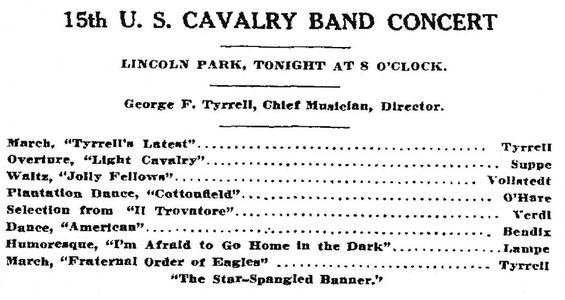 District of Columbia Concert, 1909
Recordings:  John Remmers  has recorded Cottonfield Capers on his Hand-Played CD (2007), and Jack and Chris Bradshaw perform their duo version on their CD Takes 2 (2006).  Both have been available from cdbaby.com, and Take2 also from Amazon.  In 2014, The Ragtime Skedaddlers issued their CD The Latest Popular Mandolin and Guitar Music, which includes the group's recording sold by CDbaby.  You can also purchase the individual Cottonfield Capers track or complete CD by clicking here. 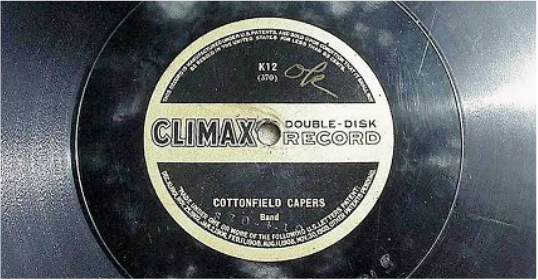 Despite the cover and title, Down Georgia departs from the folk rag style Levee Revels, Plantation Pastimes, and Cottonfield Capers.  It is an unsyncopated march and two-step.

A 1903 New York Telegraph article about M.Witmark & Sons lists Down Georgia, along with Levee Revels, as one of O'Hare's and the firm's instrumental successes.
In addition to O'Hare's amusing anecdote about meeting Victor Herbert, he commented on Herbert's career and greatness:

He was a great man, Victor Herbert.  As a musician he was one of the best of his time; as an orchestrator, he probably had no peer in his day, certainly as far as comic opera was concerned.  He was a man of temperament, as are all geniuses, but he was a jolly, genial human being above all else.

He was always eager to help others, as are all great musicians.  In all my experience, I have found such men gladly pass on to others the things they have learned.  Perhaps this is one of the reasons they are great. 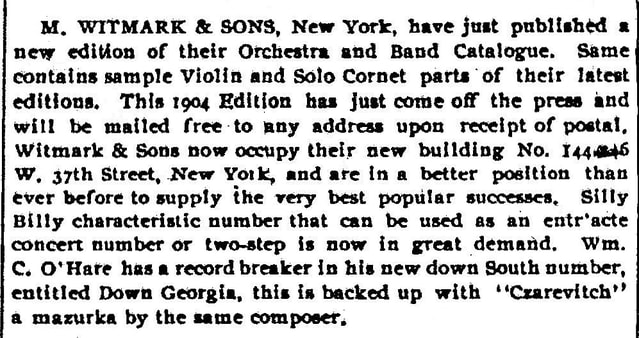