"The Great Raft," Captain Henry Miller Shreve, and the Founding of a City

Shreveport quickly evolved into a rowdy river town, filled with saloons and dance halls, and eventually into a cotton and lumber center.  Members of the Shreve Company, founded the same year as the famous battle at the Alamo, honored Texas and its heroes with several of its street names, including Texas, Crockett, Fannin, and Milam.

According to a 1925 interview published in New York's Evening Post, "At twenty-one O'Hare became the musical leader of Shreveport, La."  Although hired as the music director of Shreveport's Grand Opera House, O'Hare also played church organ, served as choir master, directed community productions, and taught music.  "In the meantime, he was writing his own music, "  the Evening Post article added.

During O'Hare's Shreveport years, each of the streets named for Texas heroes would become a part of his life, perhaps fittingly since his Tennessee-born wife-to-be always claimed kinship with the most famous of the Texas patriots, Davy Crockett.

In 1897, the O'Hare's lived at 134 Grand, near Texas Avenue, site of Shreveport's black entertainment district. 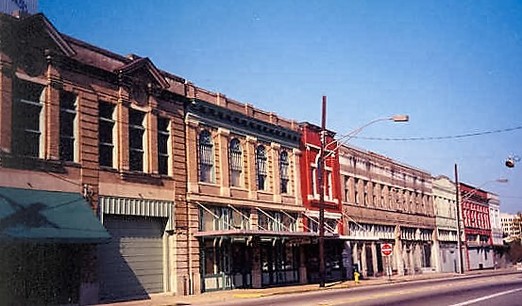 Historic black business and entertainment area known as "the Avenue," 800-1000 blocks Texas Street, as it appeared during a 1998 research trip to Shreveport

By 1899, the O'Hares had moved to Crockett Street where O'Hare also maintained a music studio.

In 1900, the O'Hares were living at the City Hotel, 215-219 Milam, touted as "the most convenient First-Class Hotel in Shreveport."

For the first time, the directory lists O'Hare's occupation as "composer."  The change in occupation and residence may have been due, at least in part, to his recent successes. His less frequent appearance in city papers might also indicate that he was devoting more time to composing or even dividing his time between Shreveport and another place or places.  Although early 1900 newspapers continue to mention him occasionally as the Grand's music director, Prof. Thomas McCann, another Shreveport music teacher, is sometimes mentioned as in charge of the  orchestra.

The local press was not always complimentary when speaking of black residents. It didn't hesitate to reprint scathing remarks from other papers, such as those below:

I'd wager that if the full truth were known, there are a thousand darkies in the city carrying rasors [sic] or pistols for some other darky, and the only reason there is so little killing is that they are on the lookout for each other.  As it is, they seldom have a picnic or excursion without at least one getting badly slashed, and here lately they have done a deal of it at their camp meetings.  --reprinted from an Atlanta paper

To the person acquainted with the habit of negroes, especially about towns and cities, there is very little difficulty in believing, with the Kansas City health officer, that the race is subject to a perennial dwindling that promises to practically extinguish the race in this country within one hundred years. Crime, vice, immorality, and irregularities render negroes particularly susceptible to tuberculosis and diseases growing out of pollution and impoverishment of the blood. . . . . There is not an hour between sunset and sunrise when a majority of negroes in a town are asleep.  Their religious meetings, secret societies, and predatory and excurbatory [?] vigils undermine the health and offset their birthrate with a higher death rate.  Ignorance, cruelty, and carelessness cause a fearful fatality among negro children. . . . . There is good reason for believing that the negro is suffering from a social and political condition unsuited to his mental and moral status.  --reprinted from a Texas paper, perhaps originally from Kansas City

A Shreveport column covering news from North Louisiana towns and cities uses a telling juxtaposition.  Following the details of an attempted break-in, foiled by women's screams causing the would-be robber to flee, the columnist describes the resulting lynching and then callously changes topics:

When arrested and confronted with the evidence he readily confessed to being the guilty party, and at 4 o'clock in the afternoon of the same day his lifeless body was discovered dangling from a limb about 200 or 400 yard from the Athens depot.  The body was left to hang until this morning, when the coroner was notified and he came down from Homer and viewed the body.  The cotton crop continues good.  Without any serious injury from rain, no worms or rust reported yet.

The most frequently praised blacks in Shreveport were the city's musicians.  Mid-19th century Shreveport appreciated and even granted special privileges to its black musicians.  Municipal records indicate that the city council approved the Ethiopian Band's request "to play & practice on their instruments" within the city limits until 11:00 p.m., provided they had "a written pass or permission from their master or owner" and they "notify constable of the time and place of assembly."

Nearly a half century later, slavery abolished, a local paper carried a brief article expressing the late-night newspaper staff's appreciation of the local black talent:  "The Times was tendered a very pleasant serenade, which was thoroughly enjoyed, by the Johnson and Markham orchestra.  This city can boast of several colored musical organizations, which contain some long known and excellent musicians."

Shreveport Cakewalks and O'Hare's Opportunity to Learn a New Skill

The happiest anticipations of belles and beaux for a pleasurable evening were fully realized at the Columbia Club . . . Wednesday evening.  The large dancing hall and handsomely furnished parlor were brilliant with lights, sparkling eyes and glittering jewels. . . .  By the way of diversity the dance was opened with a 'cake walk,' the first ever given by the club. The cake, a most tempting one, iced and covered with marshmallow drops, was placed in the center of the hall on a table. . . . The idea was to combine grace with timely motion, as they kept time to that enlivening plantation tune a 'Hot time in this old town to-night.'  After marching around the room, each time bowing to the chaperones, the judges decided the prize. . . . Taylor, an expert waiter at the Dreyfuss House and celebrated colored cake-walker, then lifted the tray and cake from the table and holding it above his head with the right hand, walked around the hall to music, lightly as he balanced the prize.  Before the victorious couple, he knelt and presented the cake, when all present displayed approval by clapping and applauding.

Merry,  yes indeed, on the way and returning; laughing, joking and singing 'rag-time tunes' that are so full of melody.  There are few entertainments like the parties on the riverside plantations, where the neighbors gather together for a good time.  The city girls jump at an opportunity for a trip to the country at this season and were soon packing to go. The woods are so fresh and green, and the levees form a pretty margin for the waters of the Red river.  A colored band of six pieces went too, so they had good dance music all the time. . . .  The programme tied with red cord and tassels was danced out according to the numbers, winding up with a cake walk, in which were some of our city's most graceful dancers.

A debut party at the grand opera house was the crowning social success of the week, and a most charming compliment to Miss Josie Carter, the sweet young debutante, on her birthday anniversary. . . .  The dances were varied and a 'cake walk' introduced in which Mr. Leon Carter [Grand Opera House manager and Josie's father] with a fair partner joined in the march.  Miss Josie Carter and Mr. Robert Ward carried off the prize for grace and poetry of motion.  The walk afforded a great deal of amusement for the lookers-on and was enjoyed by all.

Shreveport provided ample opportunity for O'Hare to build his skills as a composer of cakewalks.  Given the 1898 date of the Grand Opera House cakewalk for Manager Carter's daughter, I can't help wondering if Levee Revels, O'Hare's most famous cakewalk might have been composed for, or at least played at, his boss's daughter's party.

The writer is indebted to Prof. W. C. O'Hare for late  Washington papers, which are full of good reading.  --March 1889

Prof W.C. O'Hare leaves next Wednesday for Cincinnati and Washington, where he visits relatives and friends. . . . Professor has many friends here who will miss him on many occasions, but who know that he deserves a vacation and wish that it may be a pleasant one.    --early November 1889

During that 1892 visit back home to Washington, D.C., the following article appeared in the Sunday Washington Herald. The copy below is a reprint from the Shreveport Times:
In late July, the O'Hare family traveled roughly 40 miles south to Mansfield, Louisiana, for the mineral water discovered in 1889 as a well was deepened on the Ricks' farm just outside Mansfield. The area had rapidly become a popular health resort.

Prof. W. C. O'Hare leaves to-day for New Orleans, where he goes for a brief recreation and to consult an optician.  --December 1896

During the summer of 1897, O'Hare remained in Shreveport while his wife and son enjoyed the Texas Gulf Coast: