As Catholics, the O'Hare's attended Holy Trinity.  The items below document a few of O'Hare's activities at Holy Trinity and also mention several people who must have been more than casual acquaintances--Sturtevant, Ames, and Dubos, names to be seen again in connection with O'Hare's marriage and his sons' baptisms at which Father Gentille officiated.

Mr. L. Vandegear, of Many, La., deliberately came into our midst and took unto his heart and home Miss Emma Currie, taking her dearest friends by surprise.  High nuptial mass was celebrated by Father Gentille, at the Holy Trinity church, on Wednesday morning at 10 o'clock, in the presence of friends and relatives.  As Prof. O'Hare brought out the thrilling notes of the organ in the wedding march, the bride, arrayed in white, with a veil like a misty cloud enveloping her graceful figure, leaning confidently on the arm of her chosen husband, marched up the aisle followed by the selected attendants.  --Sept. 1889

There will be high mass at Holy Trinity church today at 9:30.  It is a feast day--Trinity Sunday, and Mrs. Parker, Mrs. Dubos, Mrs. Hock, Misses Ames and Nolan, Messrs. Parker, Sturtevant and Professor O'Hare will compose the choir.  --June 1890

Little did O'Hare know what he was walking into when he assumed the position of organist and choir director at Holy Trinity.
For more than a decade before his arrival in Shreveport, a long-standing feud had existed between Father Gentille and the Holy Trinity organist and choir. Shortly after Father Gentille arrived to replace Holy Trinity's first priest, who had died in the 1873 yellow fever epidemic,  the trouble began.  A July 27, 2000 email from the Diocese of Shreveport's archivist tells this backstory:

The choir organization headed by the organist at the time, a Mr. Doll, attempted to purchase a new organ without the pastor's approval for what appeared to be an enormous price of $200. The pastor refused to pay, and the organ was removed from the loft of the church and placed on the street for the salesman to pick up.

1894--During the 1st part of this year there has been some more unpleasantness.  It seems that [name of female parishioner] was induced by another lady good and true to the priest to make a collection among Catholics to pay Prof. W. O'Hare the sum of $15.00 per month.  The Rev. Father authorized them to do it.  They went through the congregation, collected how much?  God knows.  Not satisfied with their collection, they went around and announced an "Ice Cream festival" the very week that Father was trying to collect money for building a house for a Sexton on the Catholic Cemetery.  Both undertakings could not succeed.  Father's collection failed.  They said they collected some $60.00.  The Professor was entitled to no more than $15.00.  What use has been made of the $45.00?

While the women had earned enough to pay Holy Trinity's organist and choir director four months' wages, their priest felt these actions worthy of a written warning to his successor about one "meddlesome" woman within the church "implicated in all his troubles."  Because her descendants remained Holy Trinity parishioners, the name of Father Gentille's nemesis has been omitted at the archivist's request.

O'Hare also served as organist and choir director at downtown Shreveport's Baptist church where some of his choir members' names are familiar from Holy Trinity's choir. Like O'Hare's youngest sister Nellie in Washington, D.C., several of Shreveport's best singers floated from church to church.

From the newspaper items below, we can conclude that O'Hare temporarily abandoned the Baptist organ sometime after 1890 and returned by February 1892 and then again left after 1895 and returned by January 1900.

Professor W. C. O'Hare has set 'The Lord's Prayer' to an original composition of his, which will be rendered today . . . at the First Baptist church.   --1890

Prof. W. C. O'Hare is again presiding over the pipe organ at the Baptist church, which he handles to perfection.  --1892

Prof. O'Hare now has charge of the Baptist organ, and the choir, with his excellent accompaniments and directorship, feel inspired to sing as they have never sung before.  --late January 1900

The revival services opened last night with lively singing by Prof. O'Hare's big chorus choir.  "There'll be no dark valley when Jesus comes," "A great day coming," and other gospel hymns were sung by the big audience, led by the choir.  --Apr. 1900

By 1893, O'Hare had begun presiding at the Episcopal church organ.

St. Valentine's day was most beautifully celebrated at the First Methodist Church, it being the appropriate time to consummate the happy ending made by sly Cupid's darts.  The marriage of Miss Caro Wise, the only loved daughter of Colonel and Mrs. W. H. Wise, and Mr. William M. Sloan, of St. Louis, drew a large congregation to the above mentioned edifice. . . .  There were in front of the grand old pipe organ rich geraniums, rose camellias and fragrant hyacinths of pure while. . . . . Prof. W. C. O'Hare, seeing the bridal party enter in the mirror on the pipe organ, began the wedding march, which was full of sweet melody.    --1894

O'Hare also served as organist at B'Nai Zion, the downtown Reformed synagogue during the majority of his Shreveport years and provided musical leadership for an event raising funds for a new synagogue organ.

The Jewish New Year will be ushered in this evening by imposing services.  In addition to the regular choir, a quartette of other instruments has been added to discourse the elaborate musical programme . . . with professor William O'Hare as organist.  --Sept. 1890

The synagogue may justly be proud of a new evening service, an original composition of Prof. Wm. C. O'Hare, their organist.  This music had received the full approval of Dr. Saenger, the pastor, and is being rehearsed for next Sunday evening's service, which will be at 7:00.  The suite abounds in attractive melodies, and rich harmonies, and the few who have already heard it are very enthusiastic in its praise.   --Oct. 1890

The synagogue was thronged on Thursday.  The music arranged by Prof. W. C. O'Hare was specially selected for the occasion and beautifully and perfectly rendered by a chosen choir.. . .  The services of the new year of Israel were most impressive.  --Sept. 1892

No entertainment could have been more enjoyable than the open-air promenade concert given at Mrs. Ben Holzman's by the Jewish ladies, for the purpose of increasing the organ fund.  The night was all that could be desired for such a diversion.  The pale young moon and stars above, the bright electric lights of the customhouse tower, together with the variegated colors of the Japanese lanterns, and the bright lights that shown from the home windows, made a grand illumination for the lawn, which was enclosed and decorated to imitate a roof garden.  A canopied pavilion, with drooping curtains overhead, plants and flowers, was erected for the musicians and singers. . . .  The vocal music was excellently rendered.  Prof. O'Hare was accompanist for the choruses and led the orchestral music which Mr. Leon Kahn accompanied on the piano.    --1895

The Passover devotional services at the Jewish synagogue on Sunday were largely attended and extremely entertaining and impressive.  Wm.Christopher O'Hare presided at the organ and the song service was most beautifully rendered. --Mar. 1899

Prof. W. C. O'Hare gave excellent service as organist at the Synagogue yesterday.  The choir was composed of the best vocal talent in the city.  --Sept. 1899

A Scholar's Theory about We Bend

"We Bend is likely O'Hare's simple translation of the standard prayer in the Amidah----va-anachnu kor'im (and we bow and bend and kneel before God in thankfulness that we are not like the others.  Very strong religious statement, even more forcefully intoned during the High Holy Days services."  --email comments from the late Irene Heskes, Jewish music scholar
An 1898 Shreveport Times article comments on a portion of O'Hare's sacred music, including We Bend: 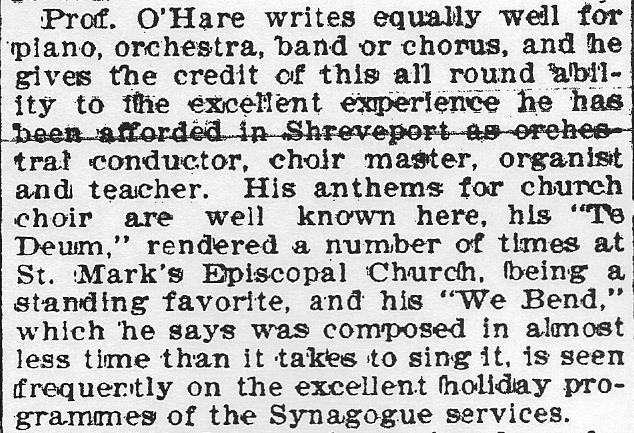 View of Texas Street with Churches