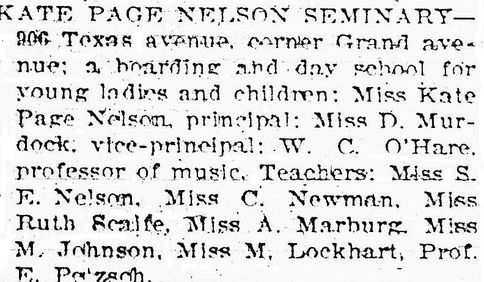 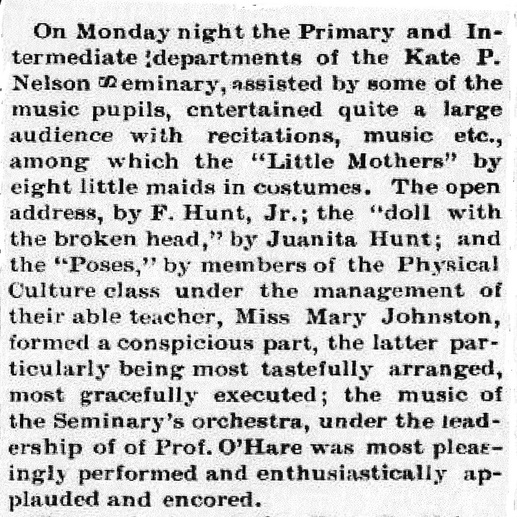 The Rise of Private Schools in Shreveport

This number continued to grow. In 1900, toward the end of O'Hare's Shreveport years, more than 8,000 black students and fewer than  2,700 white students attended public schools in Caddo Parish, the county in which Shreveport is located.

Offerings changed from year to year as did locations, enabling him to attract different students and keep his lessons in or near his changing homes.
In March 1892, "Pansy," the Shreveport Times social columnist, included a brief note about two of O'Hare's young music students:

Matie Stone and Eulin Warring, two of our bright small boys, have assisted in the orchestra the past week with violin music.  Their improvement is wonderful and is noted with pleasure by their surprised friends.

Roughly two months later, Pansy announced, "Professor W. C. O'Hare has given us an invitation to his pupils' recital, which takes place on May 25."  A local paper observed, "A striking feature on the programme is an orchestra made up entirely of juveniles."  Although common today, this must have been a first for Shreveport.

The day of the recital, the Times heaped praise on O'Hare for his contributions to Shreveport, especially to the city's young people.  The comments also reveal that O'Hare didn't intend to leave town although his plans would change around the turn of the century:
The concert program included such selections as a trio from Delibes' opera Lakmé, Gottschalk's Last Hope, the chorus from Carmen,  Ulen Waring playing Boccherini's Minuet Célebrè on violin with piano accompaniment, and the youth orchestra and various youth soloists performing pieces ranging from Rossini's William Tell Overture to Gounod's waltz from Faust.

A day after the children's concert, the Shreveport Times commented on the program's success despite inclement weather:

In the midst of the great excitement and dismay over the flooding of our adjacent country for the last few days, Prof. Wm. C. O'Hare and his talented pupils ventured last night to give their concert.  It is a great compliment to the teacher and members of his class to record the fact that notwithstanding the above mentioned drawback to all business and pleasure, that the audience was large, and not only large, but enthusiastic. . . .

The idea of an orchestra composed entirely of children struck the audience as something entirely new and as appreciated very highly indeed.

1893 Recital, Including an Original String Quartet by O'Hare

A year after O'Hare had given Matt Stone and Eulin Warring an opportunity to play with the orchestra for the first time, the boys played violin, viola, and cello in Part Two [student recital portion] of June's Dudley Buck Choral Society concert.  During Part One and Part Three,  Matt and Eulin also joined the adults on second violin and viola during orchestra selections. 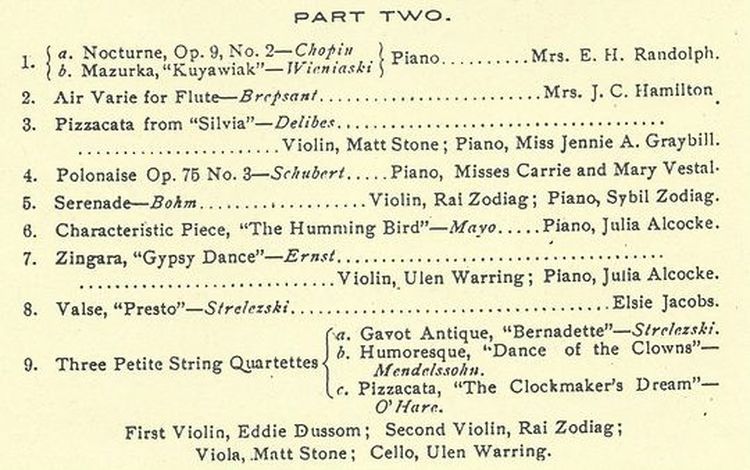 Children's portion of the program 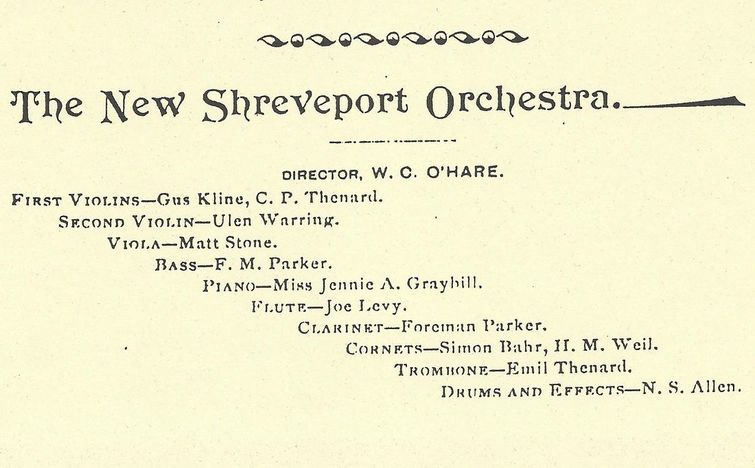 List of orchestra members participating in the concert; concert program courtesy of LSU Shreveport-Special Collections
A few days later, W.C. O'Hare presented engraved medals to two of his music students who had participated in the concert: 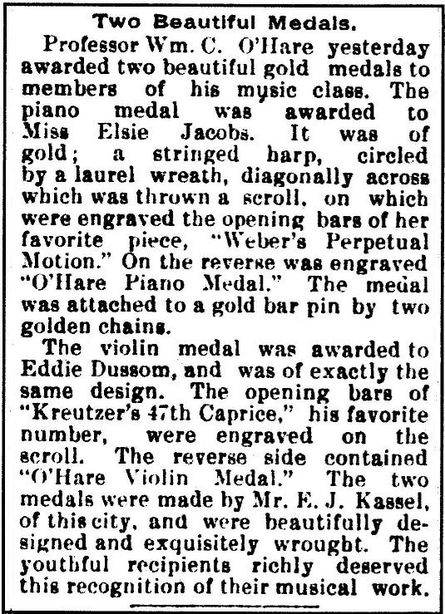 Although O'Hare continued to offer music lessons and to direct amateur dramatic productions and choral groups for special events, such as holidays, I've found no later programs similar to those for the 1892 and 1893 concerts.
Background image, top of page: Kate P. Nelson's Seminary, private girls school where O'Hare taught