Sweet Cider Time When You Were Mine (Feist, 1916)
Wake Up, America! (Feist, 1916)
Listen to Frederick Wheeler sing Wake Up America!--a patriotic song to stir the country into joining World War I
There Is No Hyphen in My Heart (Edwards & Fabricant, 1918)
In 1918, W. C. O'Hare completed the band score for what sounded like an an obscure, insignificant piece.  The discovery of the mysterious title's historical significance and the song's frequent appearance in World War I era publications have led me to include it.
At a time when O'Hare increasingly focused on music aimed at use in school classrooms, lyricist Josephine M. Fabricant--a New York City Public Schools teacher whose parents were Czech immigrants--wrote a poem first published in School, the "voice" of New York City public education.  Fabricant's poem reappeared in the April issue of the Journal of Education and was soon reprinted in newspapers across the U.S.

By July, Ariadne Holmes Edward's musical setting had been copyrighted, quickly followed by O'Hare's band score and an unlocated orchestra score that was likely O'Hare's, too.

The history behind Fabricant's poem, which eventually led to O'Hare's arrangement(s) is too complex to include here but too interesting to ignore.  It will be found in the second blog entry:  "War on the Hyphen:  Story Behind a WWI Song." 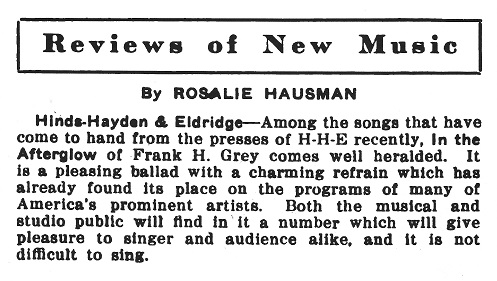 Marchéta (John Franklin, 1924)
Due to copyright, I am not posting my mp3 scan of the roll in my collection.
Washington Birthday March (1931)
Best known for her Communion Hymn ( G. Schirmer, 1929), which is still performed, Mary Pickens Opie composed several other copyrighted pieces, mostly unpublished.  How O'Hare came to arrange Mary P. Opie's Washington Birthday March isn't known.  Possibly her connection with G. Schirmer, which also published some of O'Hare's compositions and arrangements, led to that connection.