Commandant Wharton signed Michael Sardo's and the others musicians' discharge papers, indicating that they had fulfilled their service as musicians.

Carusi's claim goes on to explain how the musicians "embarked by order of the then Secretary of the Navy, on board the frigate Chesapeake, bound for the Mediterranean in 1807."   In other words, they were to be returned home aboard a U.S. ship as they had arrived nearly two years earlier.

The musicians didn't get far.  The Chesapeake soon came under British attack.  Heintze's article cited on the previous page, provides additional details of the Chesapeake's lack of preparedness and the subsequent events:

Some of the ship's cannons were not seated properly in their carriages, powder horns were not filled, and the cartridges brought on board for the Marines were not of the proper size  Moreover, the Chesapeake's decks were littered with provisions, equipment, and personal belongings, including Carusi's baggage. . . . At about 3:30 p.m., some twenty miles out in open sea, the Leopard came alongside of the American vessel.  Lieutenant John Meade, an officer from the British vessel, boarded the Chesapeake.  In a meeting that lasted over a half-hour, Meade demanded from Barron that he hand over a group of British deserters.  Barron refused and Meade returned to the Leopard. Although Carusi may not have known right away that the British were looking for deserters, he must have been extremely concerned, for the British had a reputation for impressing foreigners in their navy.  Carusi's family and other Italians decided to go below deck in order to stay out of sight.

In a feeble attempt to prepare his ship for battle, Barron ordered the decks cleared and all baggage, including Carusi's trunk [and, perhaps the other Italian's baggage] thrown overboard. Shortly thereafter, the Leopard began firing broadsides into the Chesapeake.  Within twenty minutes, three American sailors had been killed, eighteen others wounded, including Barron.  The Chesapeake was badly damaged and had over three feet of water in her hold. Barron ordered the ship's  colors struck, after which the British immediately came on board to remove the four deserters.  The Chesapeake was in a state of chaos. 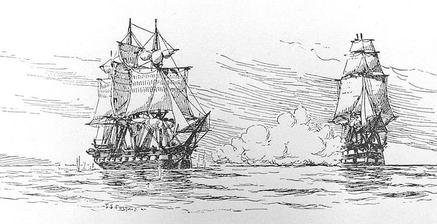 The Chesapeake-Leopard Affair, June 22, 1907; drawing by Fred S. Cozzens, 1897
Badly damaged, including a shattered mast, the Chesapeake returned to port with the Italian musicians and families on board, including one passenger more--the newborn third daughter of Michael and Agatha Sardo.

Michael Sardo and some of the other Sicilian band members did reenlist or were later conscripted.  Roughly a century later, James Croggon's July 1907 Evening Star article about old-time residents stated, "Mr. Sardo is said to have been an Italian count at home, but never claimed the rank here.  He served his adopted country in the battle of Bladensburg." 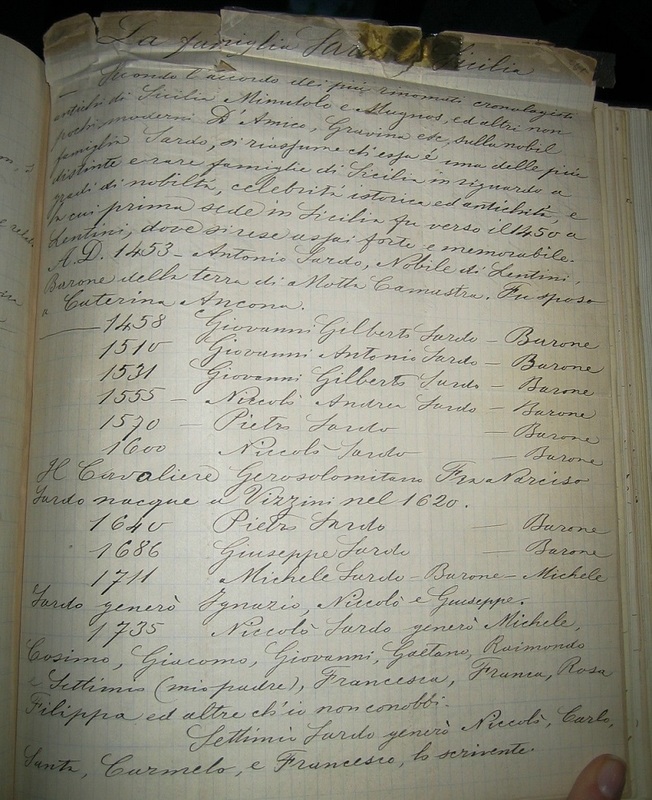 The last listed Nicolo Sardo, born in 1735, was Michael Sardo's father.
War of 1812 service records indicate that Michael Sardo served as a musician in the First Regiment, District of Columbia.  The Americans' failure to defend the bridge at Bladensburg, Maryland, on August 24, 1814, led to the British advance on Washington and burning of government buildings.   Click here for a History Channel video on the Battle of Bladensburg and the burning of Washington 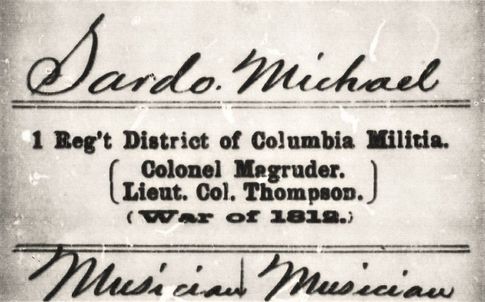 While a grocery store owner on 10th Street during the War of 1812, Michael Sardo was "said to have sold his whole stock to the British soldiery, being soon the richest man in Washington in pounds, shillings and pence."

How long Sardo served as a military musician is uncertain, but a mid-1820s item later on this page indicates that he maintained military band connections for quite some time. Although little evidence has been found of Sardo's participation in the U. S. Marine Band, itself, at least one of the Sicilian musicians rose to the position of Marine Band leader--Venerando Pulizzi, who served as acting leader and then leader between 1816 and 1827, according to Director Jason K. Fettig's band history.  An 1895 Evening Star article indicates that band leader Gaetano Caursi, Michael Sardo, and other Italian musicians "formed a band that was attached to the marine barracks" and that Sardo became band leader in 1825.  However, no official proof has turned up to indicate that Sardo and most of the musicians who had arrived with him were ever members of the U.S. Marine Band.

Life and Death of Michael and Agatha Sardo

In the September 24, 1906 Evening Star, James Croggon wrote about the c. 1815 division of property in the important 10th Street and Pennsylvania Avenue area, with Michael Sardo taking a corner and the adjacent lot and with another nearby lot going to Gaetano Carusi, former Sicilian band leader.  Carusi now taught music and provided assembly rooms for social and government functions, including inaugural balls. Michael Sardo thus expanded his original 10th Street property.

On the southwest corner of Pennsylvania Avenue and 10th Street, between the Capitol and the White House and a short distance from Ford Theatre, Michael Sardo opened a large boarding house catering to Congressmen:

Michael Sardo, corner of 10th Street west and Pennsylvania Avenue, Washington City, respectfully invites the attention of Members of Congress and others to the conveniences of his boarding establishment; it is a large and commodious three story brick house, the rooms of which have been fitted up with care, so as to insure comfort to all who may favor him with their patronage.  He can accommodate a mess of 10-12 Members with single rooms; and also a small number with their families.  The side walks to the Capitol or the Public Offices are paved throughout which will render the walking excellent.  His table will be spread with the choicest productions of the season, and his terms will be very moderate.

In addition to his business ventures, Michael Sardo continued his music career as evidenced by the following two mid-1820s items from the Daily National Intelligencer and a third from the 1830 city directory. 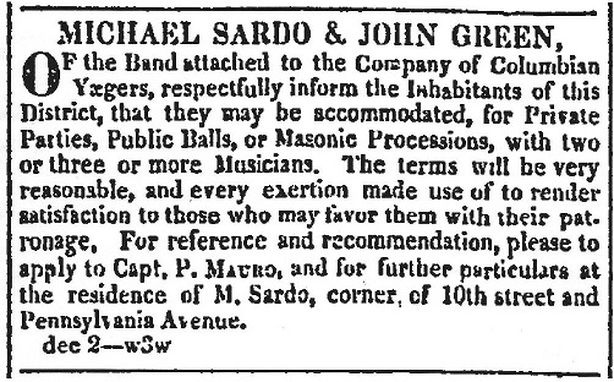 At a very numerous meeting of the citizens of the western section of Washington, held at the Town House of the first ward, this glorious anniversary [of the Battle of New Orleans] was again celebrated, and [an] address, which was adopted by the meeting, presented General Andrew Jackson. . . .  Numerous bonfires, in front of the General's quarters, which were well supplied and kept up, threw a lustre round the Ward.  The roar of cannon, the continual discharge of musquetry and other fire arms, the loud reiterated cheerings of the citizens, carried with it the most conclusive evidence of love, gratitude, and affection which they bear towards the gallant and accomplished Hero of New Orleans, the intrepid defender of his country's rights. . . . The elegant Band, under their leader, Mr. Sardo, deserve great praise for their masterly and enlivening music. 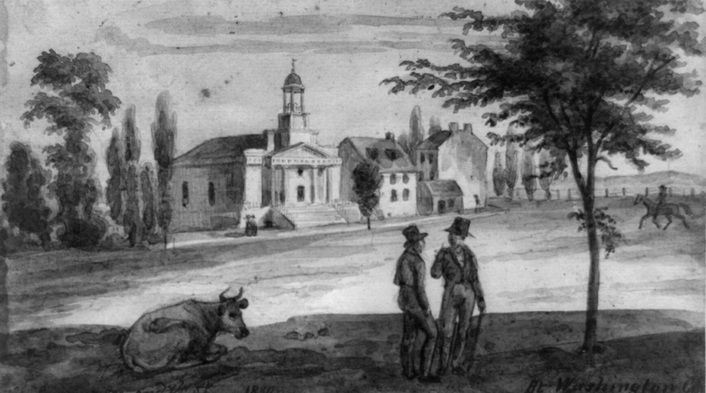 Agatha's son-in-law Alexander McFarlan, husband of daughter Josephine, is said to have written the inscription on her grave:

On April 12, 1860, 17 years after Agatha's death and a year before the start of the Civil War, 83 or 84-year-old paralyzed Michael Sardo died,  Agatha and Michael Sardo, Italian ancestors of William Christopher O'Hare, are buried side by side in Mount Olivet Cemetery, Washington, D.C. 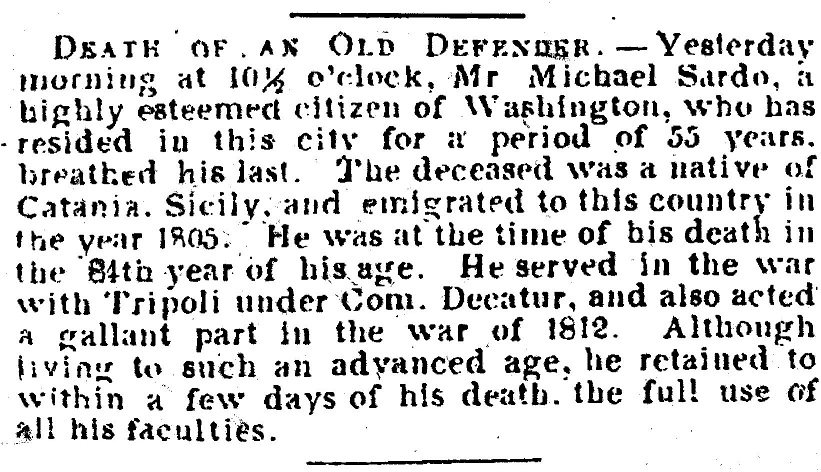 Following the birth of Michael and Agatha Sardo's third daughter during the Chesapeake-Leopard Affair, Capt. Barron is said to have named her Fortunata because she was lucky to have survived birth during the battle that killed or wounded more than twenty aboard the Chesapeake.  The Sardos would never again attempt to return to their homeland.

Daily National Intelligencer provides occasional glimpses of Fortunata's life:
A February 12, 1825 item announced the recent marriage of "Fortunate Mary Sardo" to stone cutter Robert Brown.  Like her parents and sisters Josephine and Mary Ann, she used the English form of her name.

The construction on the U. S, Capitol completed, the couple moved at least by 1829 from Washington, D. C. to a farm in Montgomery County, Maryland.  An October 1820 newspaper article speaks of the impending sale of several choice Washington, D. C. lots, most of which already contained rental homes or apartments.  Fortunata Sardo Brown's father Michael is listed as a contact in Washington and Robert as the contact in Montgomery County.

In August 1844, the Browns have the household furnishings in their home near the south gate of the Capitol auctioned, indicating that they were closing a home they had retained in the city when moving to the country.  Auction items included Mahogany chairs, wardrobes, bureaus, washstands, hair seat sofas, maple chairs and secretary, Brussels carpets, French high-post bed, china, crockery, and much more.

An online history of Wheaton, Maryland, indicates that the younger Robert Brown continued to buy farmland in the area, significantly expanding his father's holdings.  In 1842 and 1844, Robert Brown offered several farms for sale, presumably portions of the land he and his father had accumulated.
According to Washington and Baltimore papers, an April 8, 1850 fire destroyed the Brown's uninsured Montgomery County home.  The family barely escaped, and one of their children was reported to have been  and badly burned.
When descendants of William Christopher O'Hare's younger brother Joseph Vincent told me the story of Fortunata's birth aboard the Chesapeake, the tale seemed too colorful to be true.  Everyone who knew the story readily admitted that it was part of the family's oral tradition and lacked documentation.

Through an Italian genealogy website, I encountered a descendant of Fortunata's older sister Josephine (Giuseppina), who had kept a family history.  This distant relative from Michael Sardo's line provided scanned copies of the volume's cover and relevant page. That cover and the excerpt recounting Fortunata's birth appear below: 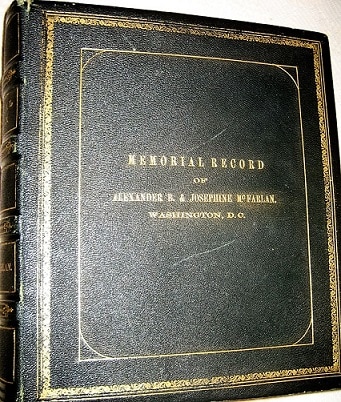 Account of Fortunata Sardo's birth as written by older sister Josephine Sardo.
My check of census records further corroborate this family narrative.  The 1850 census entry below indicates that Fortunate Mary Sardo was born "on the high seas."  Later censuses in which Fortunata and Robert's children indicated their parents' birthplaces also list Fortunata as born "at sea."

When we combine this evidence and with Gaetano Carusi's account of the musicians' having been aboard the Chesapeake when it was damaged and forced to turn back on June 22, 1807, we can confirm the accuracy of the family's oral tradition.

In life, Michael Sardo and friend Gaetano Carusi helped feed, house, and entertain the residents of a city that offered little food, housing, and entertainment for anyone when they and their fellow musicians arrived from Catania, Sicily, in 1805. 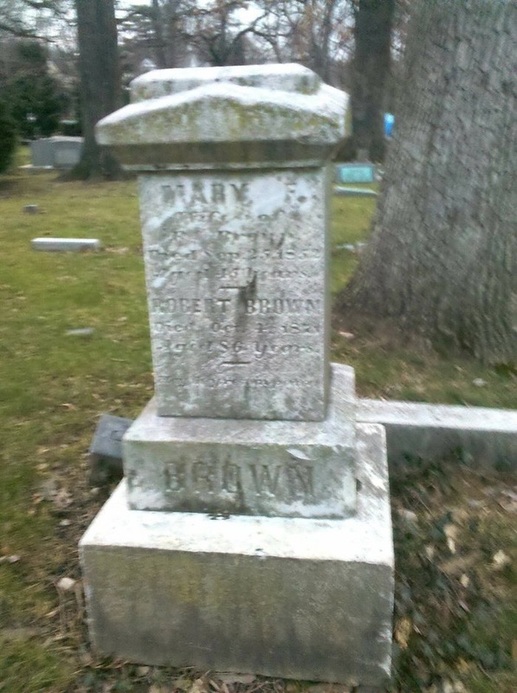